The Pudding Club® at The Three Ways House Hotel in Mickleton, England 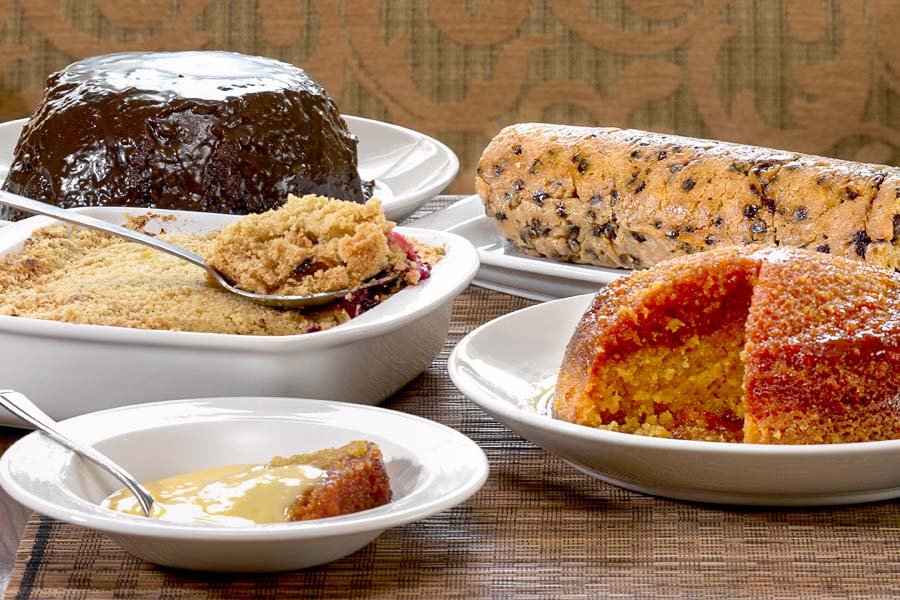 Earlier this year, while traveling through South West England, we had the pleasure of attending one of the most peculiar culinary events… ever. Here, in the heart of Britain, in the beautiful and quaint Cotswolds region and in the small town of Mickleton, Chipping Camden, Gloucestershire, tradition is more than just a sweet memory. This is the home of The World Famous Pudding Club®.

England’s history is measured in centuries and there are very deep culinary traditions. One is the English Pudding. Americans typically think of Jello as pudding, but in England, puddings are a very serious and fancy affair going by such names as Syrup Sponge, Lemon Curd Roly Poly, Spotted Dick, Steamed Plum Sponge, Gooseberry and Elderflower Fool, Lord Randall’s Pudding, and Sticky Toffee Pudding. These are just a few of the hundreds of traditional English puddings dating back to the 15th century. These sweet moist endings, often referred to as “puds” or “afters,” were weekly treats served in most English homes for centuries. 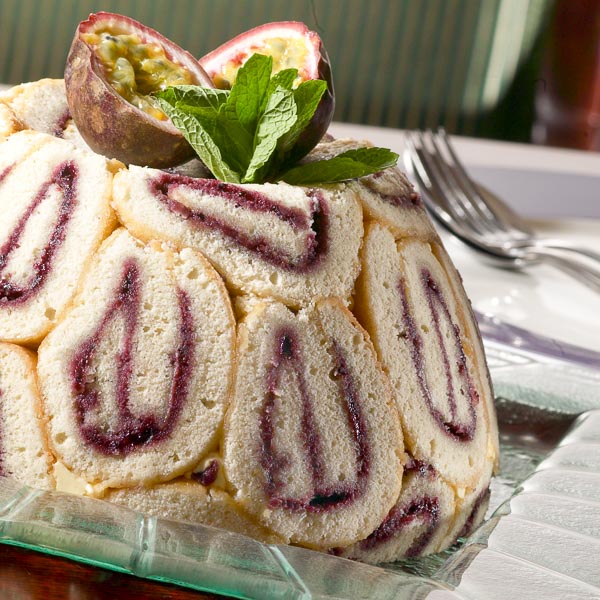 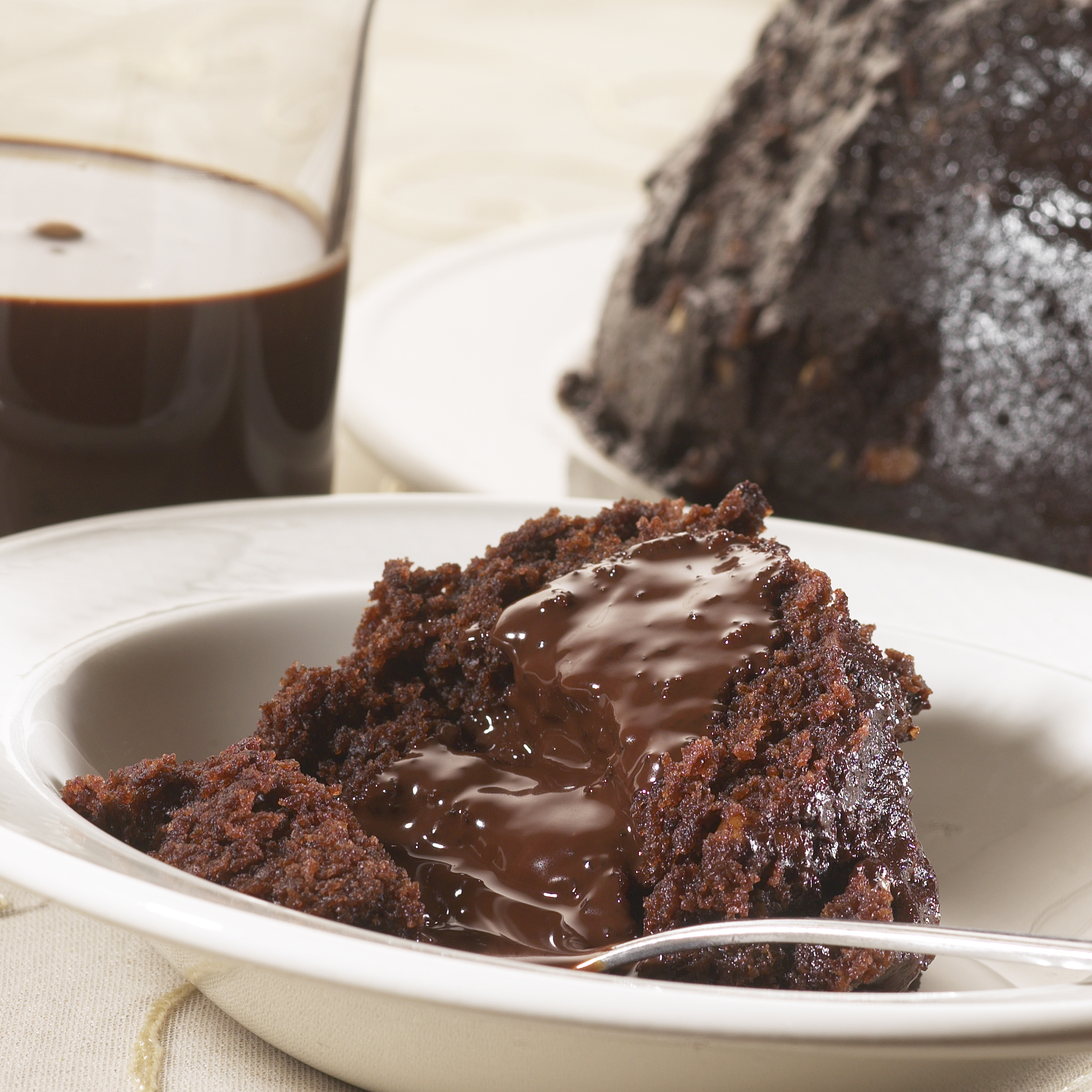 In the 1970s and early 1980s the British were losing interest in their traditional puddings. Food innovations, such as packaged desserts, combined with access to sweets from other countries, made their way to the English dinner table and were changing the usual dessert routine. It was in 1985 that a small group of pudding lovers in the tiny countryside town of Mickelton, concerned at the loss of the traditional pudding, decided to get together to create and indulge in their childhood favorites that were no longer widely available. The group prepared seven puds. This event was so popular they invited more friends and began to expand the offerings of puddings. 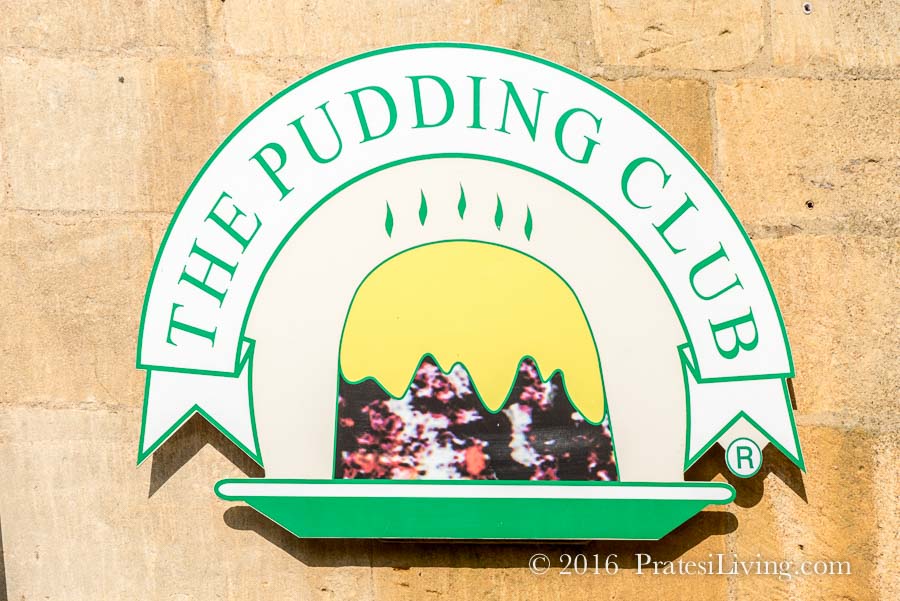 Home of The Pudding Club®

The owners of the Three Ways House Hotel (and creators of The Pudding Club®), hosted the weekly event. You might think that a pudding club would be more of a local gathering, but these evenings had broad appeal and went viral. People came from far and wide to experience the puds. Each week, seven puddings were prepared and served as “the main event.” 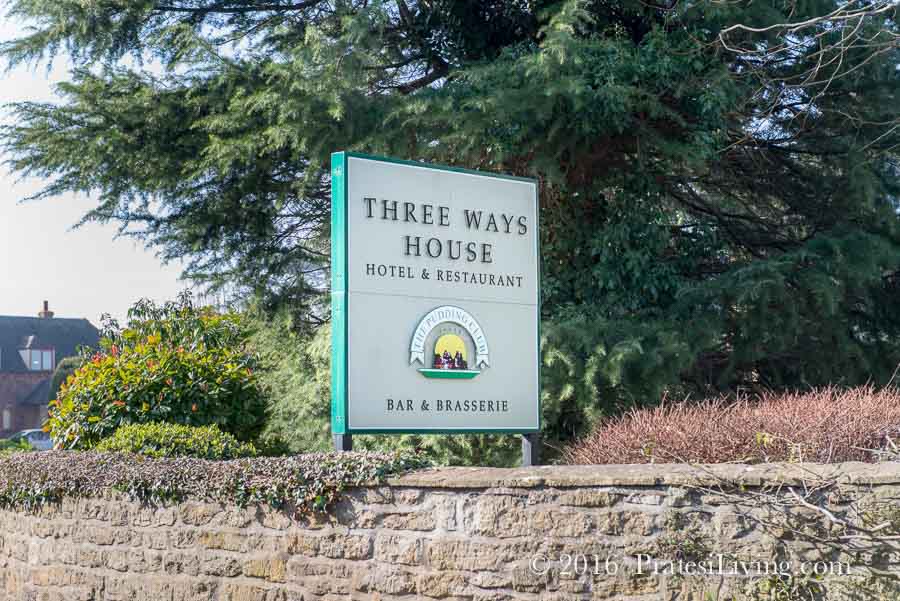 In 1995, new owners purchased the boutique English country property and have now created a somewhat quirky experience with The Pudding Club® as an organized weekly attraction. Luckily for us, The Pudding Club® just happened to be taking place the evening we were staying at the Three Ways House Hotel. 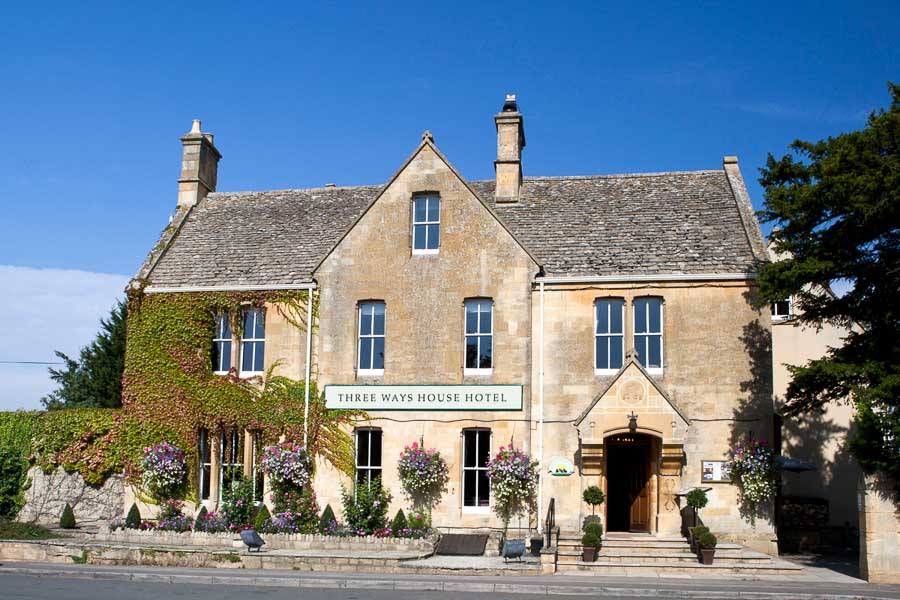 Of the 48 guest bedrooms and accommodations at the property, seven are pudding themed. We stayed in the Chocolate Suite adorned with a bed of chocolate pillows, chocolate boxes, and candy wrappers, all decorative touches for the chocolate-centric room. They even had chocolate soap in addition to Molton Brown toiletries. 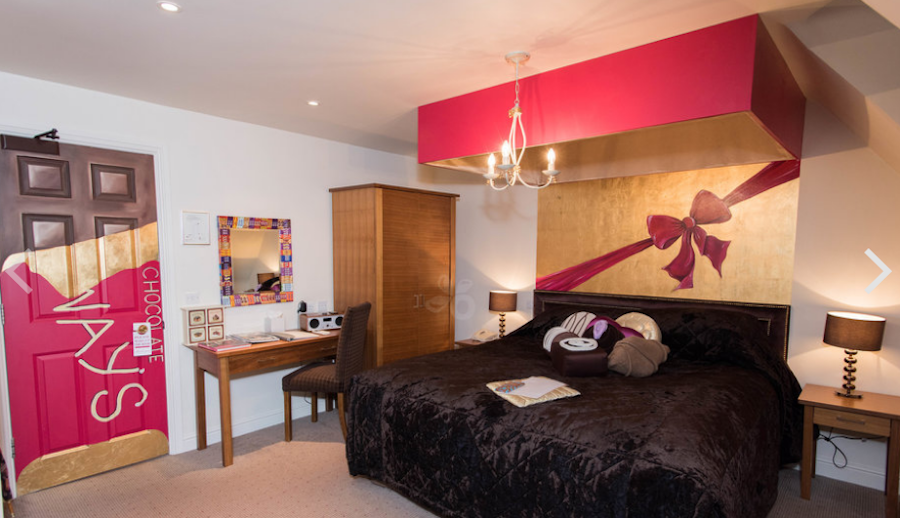 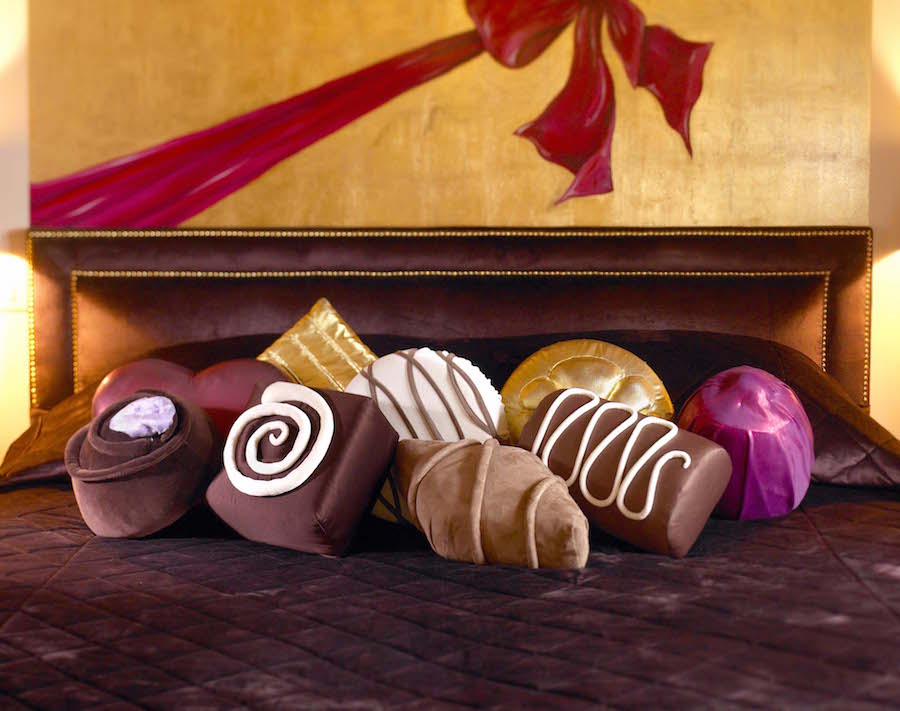 It would be easy to focus on the whimsical nature of the themed rooms and The Pudding Club®, but Three Ways House Hotel is also outstanding as a traditional inn. Owners Jill and Simon Coombe are enthusiastic and gracious hosts and take the customer experience very seriously. From the warm and inviting lobby and sitting rooms to the comfortable and attractive bedrooms, the Coombe’s and their staff of 50 have been awarded a AA Rosette for culinary excellence and a Silver Star Award from AA for their meticulous hotel keeping. The Three Ways House Hotel offers guests a traditional, and if desired, not so traditional experience in the northern edge of the Cotswolds, just 90 minutes from London and ten minutes from Shakespeare’s Stratford-upon-Avon. 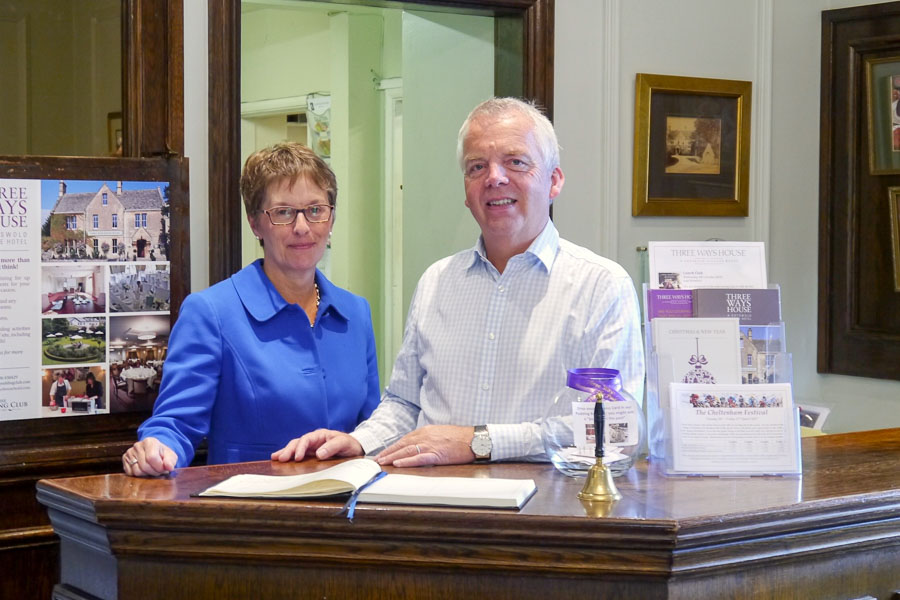 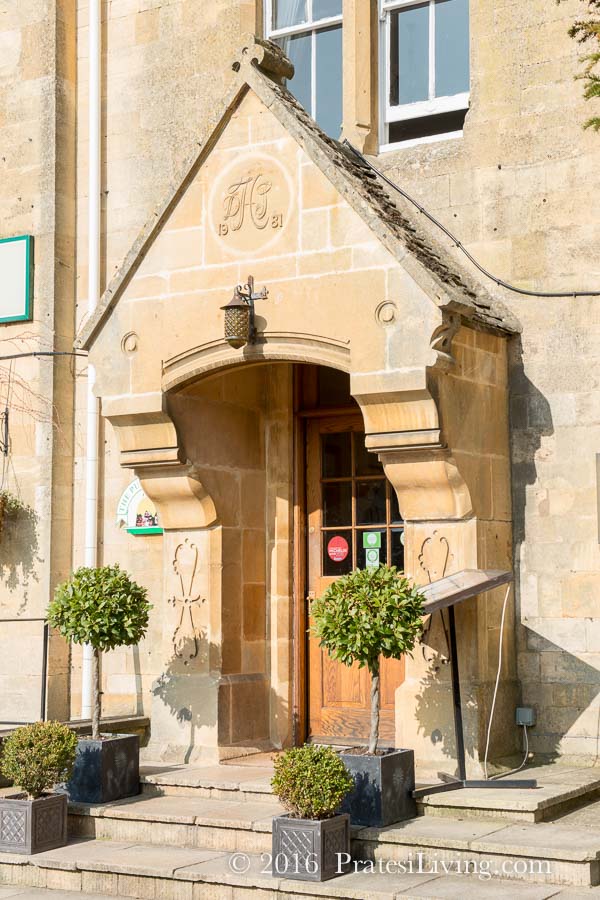 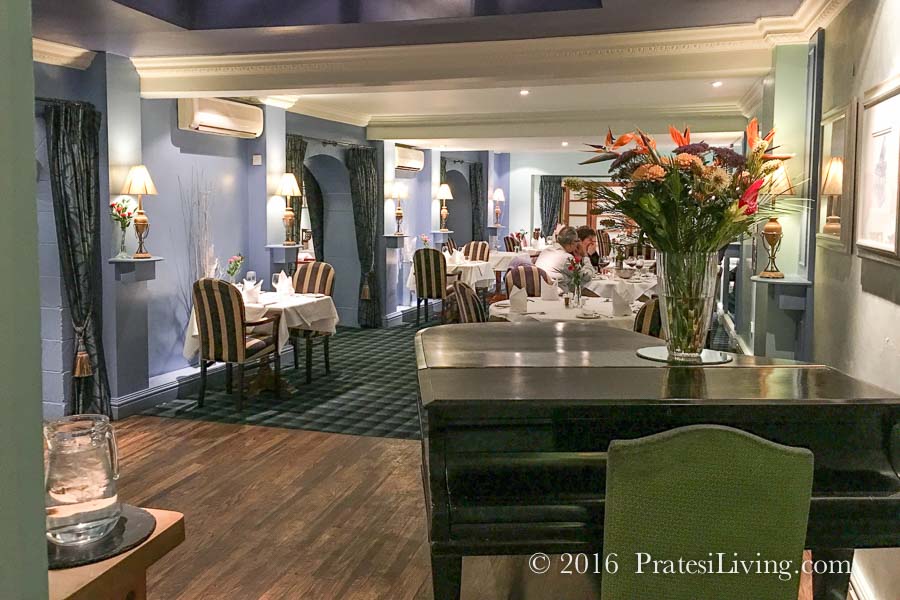 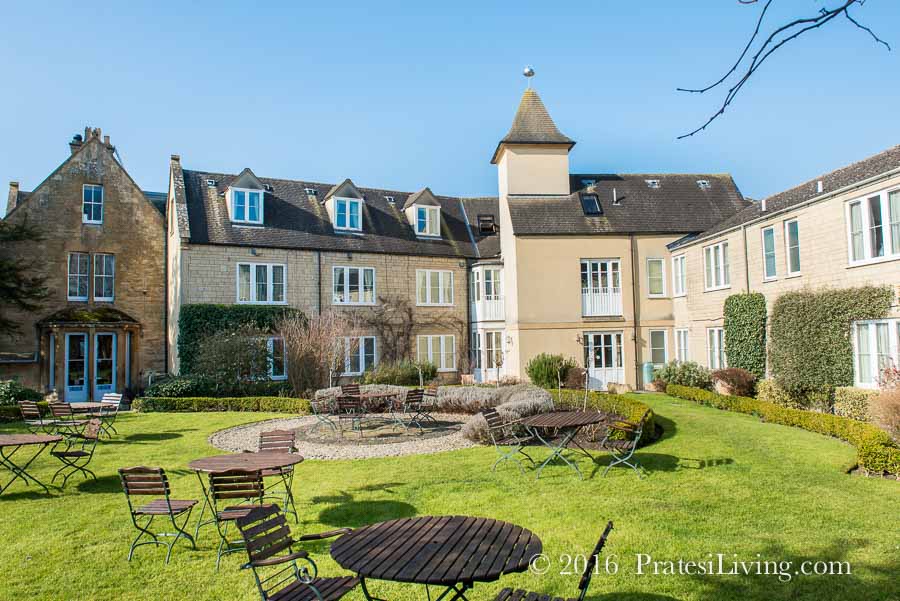 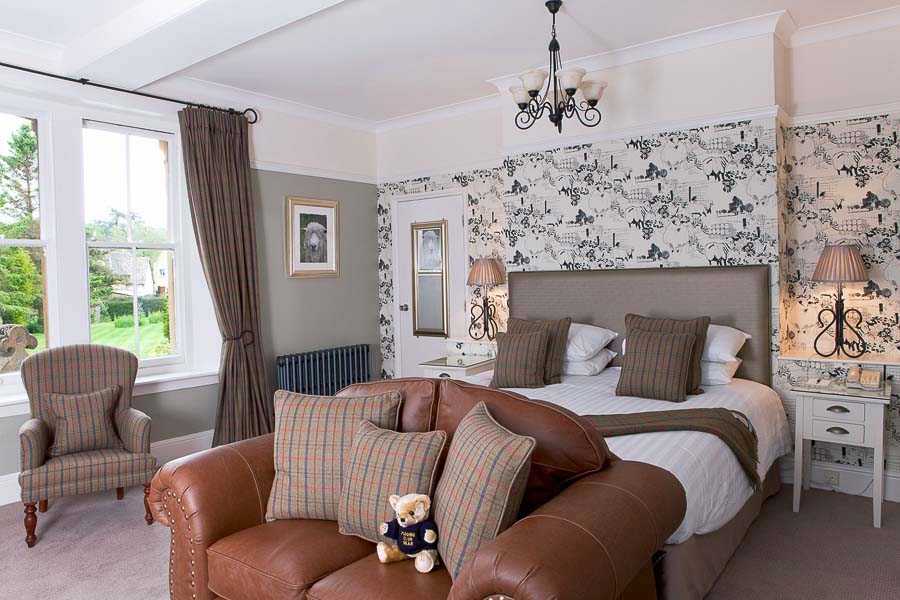 * Another bedroom at the property

The Coombe’s have extended the reach of The Pudding Club®. In addition to their Friday evening, and occasional Saturday or Sunday meeting at the hotel, they have taken their sweetness to faraway lands like Japan and have even convened in the famed James Beard House in New York City.

An evening of The Pudding Club®

At the hotel, The Pudding Club® meetings are an evening of entertainment that can be enjoyed by all. You don’t have to stay in the hotel to take part in the fun. The Pudding Master role changes from week-to-week to keep the activities lively and fresh. The night we attended, Simon was Pudding Master and ushered in the evening’s activities with great fanfare and brought the crowd to their feet during the introduction of the chosen puddings for the meeting. For some reason, when the Spotted Dick pudding was announced, the crowd roared with excitement and set up a clear competition with the other six puddings. 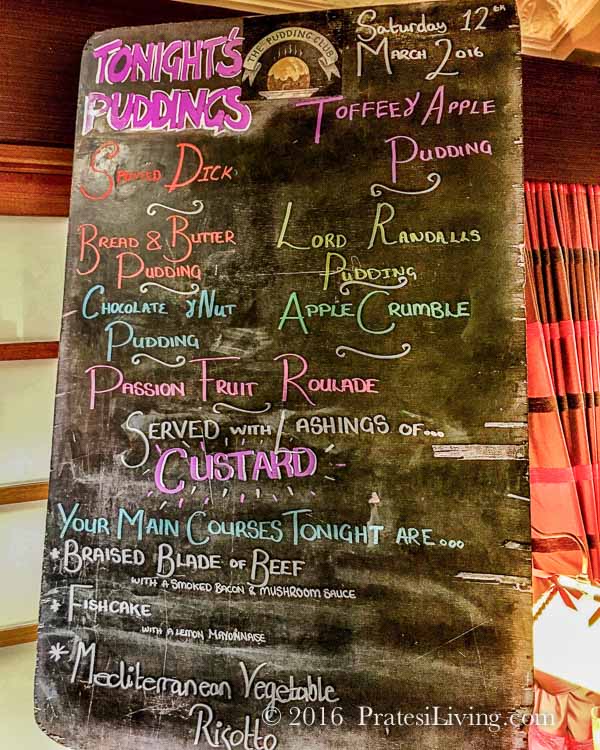 The puds for our dinner

While Three Ways House has an excellent ala carte menu in their highly acclaimed restaurant, The Pudding Club® offers a fixed menu with undersized entrees that are simple, but tasty, and act more as appetizers leading to the main course…the puds. When it’s time for “afters,” they are paraded into the dining room, one-by-one, to the fanfare of music and clapping. The crowd responds to the sight of each entry with anticipation of which sweet ending will be voted the evening’s tastiest dessert. The diners keep a score sheet and at the end of the night the results are tabulated and a single pudding will be crowned supreme. 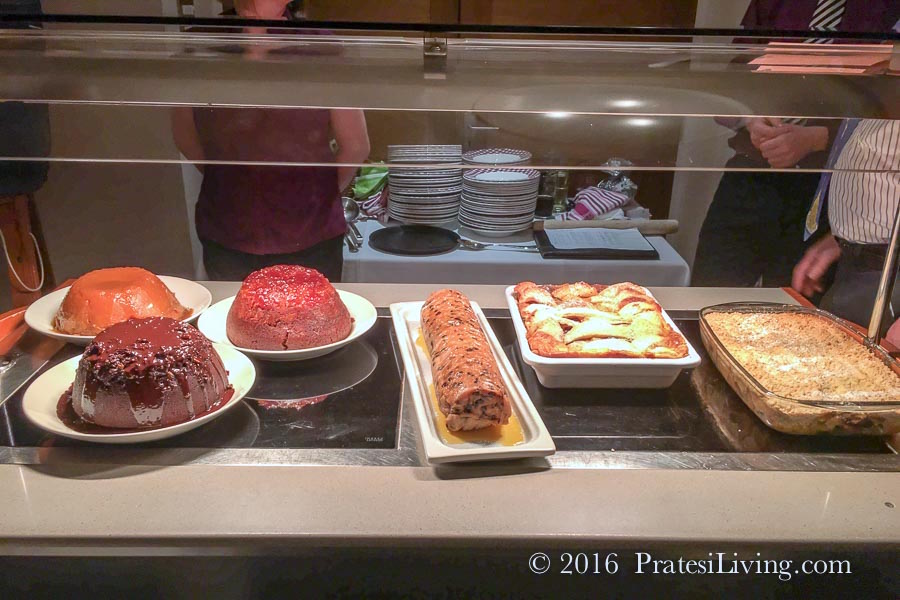 Where should we begin?

The rules are quite simple, you can have as many and as much of any of the seven puddings as you would like… except you must eat one at a time and you must finish all that you are served before coming back for more. You can ask for as much or as little as you think you can eat.

As a word of advice from an experienced puds eater, start with small servings and eat slowly. Also, strategically plan your attack. If there are certain puddings you think you will like more than others, like Bread Pudding and Sticky Toffee Pudding, schedule those after a few starter portions of other offerings. Be sure to try them all and remember you can always go back for more… if you aren’t already overly full. 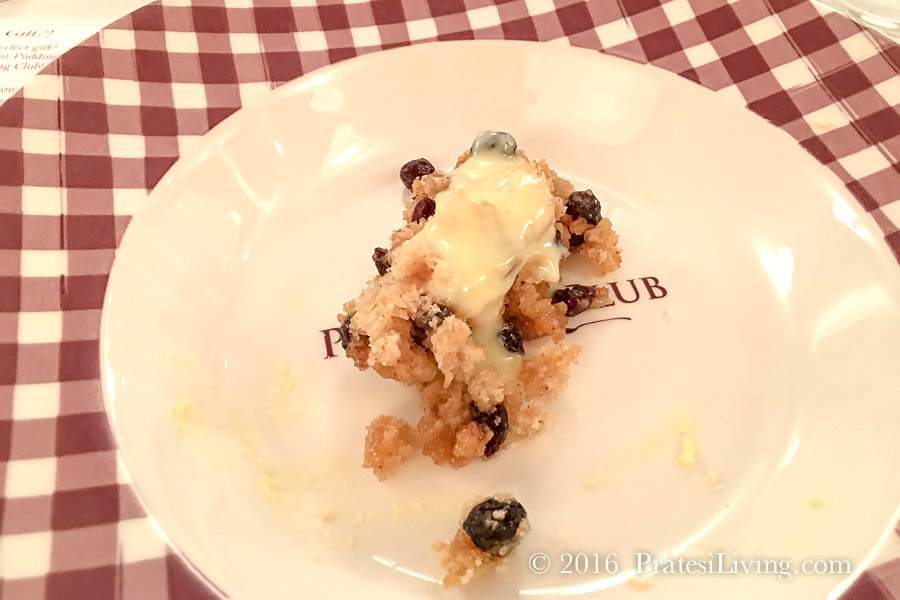 A small serving of Spotted Dick with custard to start

Which brings me to the irony of The Pudding Club®. The term “Being in the pudding club” is an English colloquialism that is less known today than the mid 20th century. It means being pregnant and by the end of the evening you’ll feel like you’re ready to give birth and will be glad if you chose to stay at The Three Ways House for the evening and that your comfortable bed is just steps away where visions of sugar plums will dance through your head… all…night…long.

We didn’t know what to expect when we arrived at the hotel, checked in to the Chocolate Suite and made our way to the large crowd gathered for the evening’s Pudding Club® meeting, but we can assure you that it was lots of fun and a memorable affair, and we enjoyed the hospitality of Jill and Simon, as well as the company of the guests, many of whom have attended prior Pudding Club® meetings. 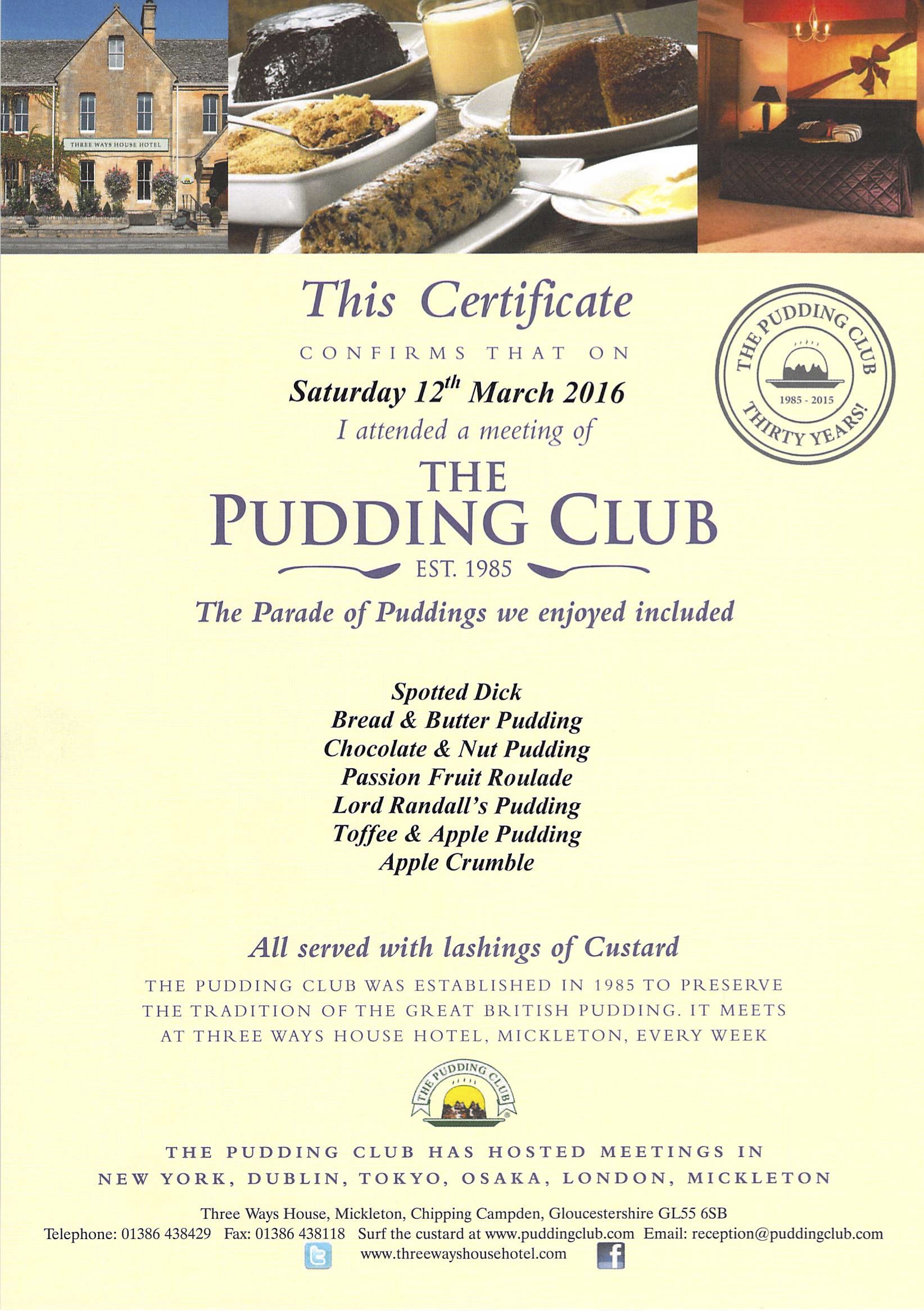 Each guest receives a certificate

So which pudding won the evening’s competition? It was Bread Pudding. My favorite, Sticky Toffee Pudding, came in third. One surprise of the night was the lashings of custard served with the puddings. They make homemade custard as well as purchase pre-made custard. Surprisingly, the pre-made custard won for smoothness and richness of flavor and it’s the most popular with the guests.

Jill told us, “The custard we use is in powder form it’s Britain’s oldest & most well known brand of custard called “Birds”. We make up the custard, it’s not actually pre-made as such. Bird’s Custard was invented in 1837 by a gentleman whose wife had an allergy to egg but liked custard. Luckily Alfred Bird was a chemist & knew how to make an alternative to the traditional English Custard or Sauce Anglaise which is served in restaurants & is based on eggs, milk & cream. Crème Anglaise would be too rich to serve with Pudding Club puddings, so Bird’s Custard is just the right thing and it has a great story!”

If you’re not fortunate enough to be in The Pudding Club®, literally and not figuratively, and would like to experience authentic English puddings, we highly recommend trying some of the recipes contained in their book, Great British Puddings: 140 Sweet, Sticky, Yummy, Classic Recipes from the Pudding Club of Great Britain, available on Amazon. You can learn more about the Three Ways House Hotel, The Pudding Club®, Mickleton, and the surrounding area on their website, Three Ways House Hotel. 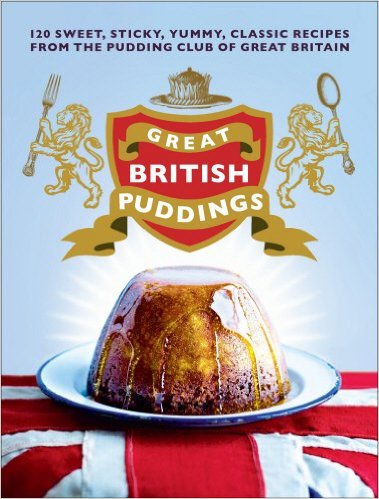 As mentioned earlier, Sticky Toffee Pudding is one of our favorite puds and we ordered it several times during our trip to South West England. If you’d like to prepare this deliciously decadent traditional English pudding at home, here is the recipe from Three Ways House Hotel and The Pudding Club’s® book referred to above. Their version is called a Sticky Toffee and Date Pudding. 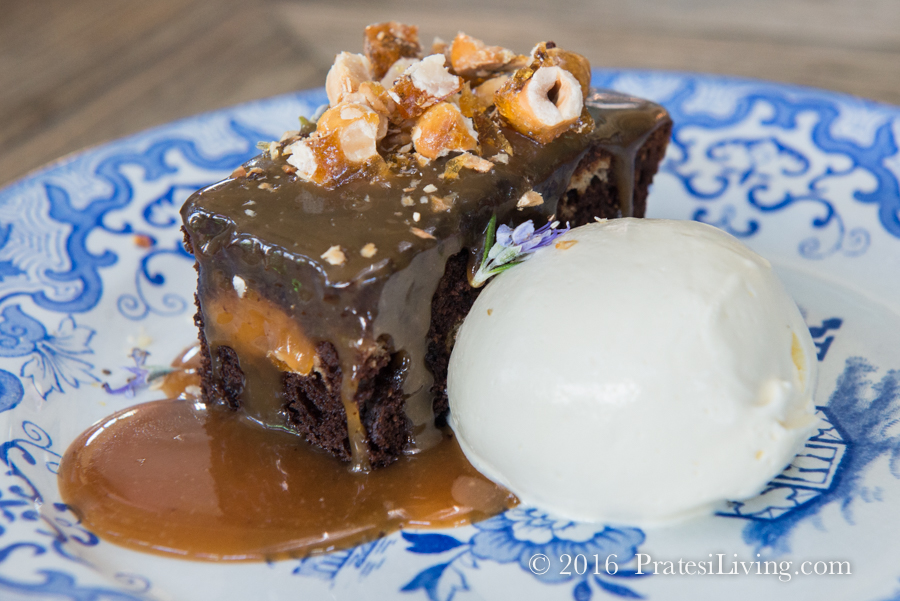 Disclosure – We worked with Visit Britain on this trip to South West England. As always, the opinions expressed are our own.

Melt sauce ingredients together and put in to the base of a greased 1.1litre pudding bowl.

Cream together margarine and sugars, beat in the egg gradually. Add dates, water and flour and mix well (the mixture will be very liquid).

Pour mixture on to the sauce, cover and steam for 1.5 hours.

The sauce and sponge mixture mix together during cooking.

Reprinted with permission by The Pudding Club®