Open my heart and you will see Graved inside of it, “Italy.” ~ Robert Browning

I can still hear the town of Conegliano coming to life every morning. Street sweepers cleaning the ancient cobblestone streets, dogs barking on their morning walk, and church bells signifying the beginning of a new day.

There were also brilliant sunny afternoons sipping Prosecco Superiore overlooking the terraced vineyards – many still a deep, verdant green with the warm late October temperatures, and walks through quaint hill towns and forests, one in search of the prized Marroni chestnuts, grown only in certain parts of Italy. Then, there were hours spent chatting with passionate winemakers about the process of making Conegliano Valdobbiadene Prosecco Superiore DOCG by the Italian method, where the second fermentation takes place in pressurized vats.

Perhaps one of the most memorable experiences began with a visit to the 17th-century Croda Mill outside the town of Refontolo. Here, we ground dried corn for polenta. This was followed by a cooking class and laughter-filled lunch with a charming young couple at their idyllic B&B, Our Rustica, which is picturesquely nestled in a hillside in nearby Tarzo.

Before my visit to Conegliano Valdobbiadene Prosecco Superiore DOCG, I, like many Americans, thought of Prosecco as a simple celebratory bottle of sparkling wine from Italy. I now know it is far more than that and I have a real appreciation for this wine and the challenges of how it is grown and produced. I also cherish the moments spent with the engaging people of this beautiful region. They are fiercely proud of their heritage and continue the legacy and family tradition of making their uniquely special wine. The people and this part of Italy have captured my heart. 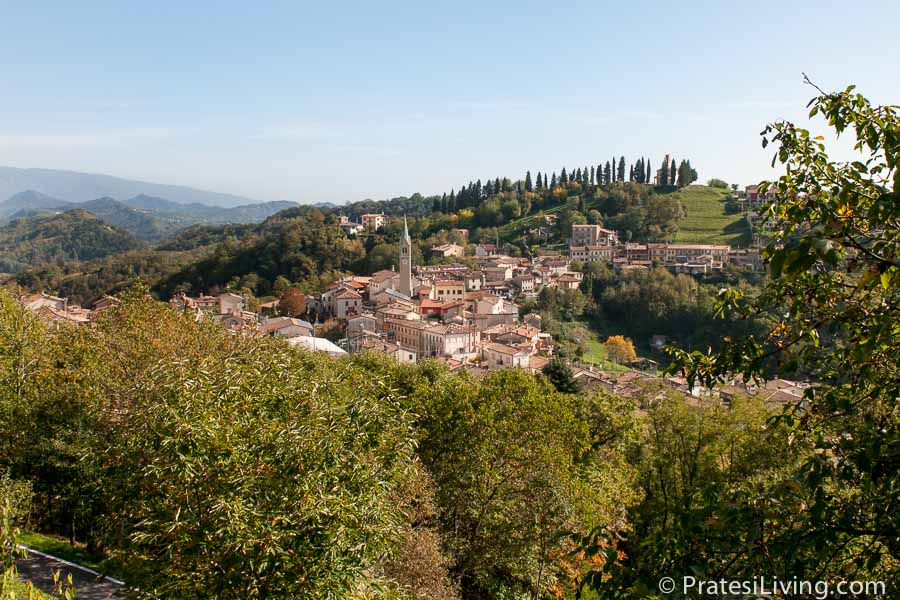 The hills of Conegliano Valdobbiadene

We’d like to thank Carrie Williams and Ryan Wang of WineWednesdayPodcast.com for use of their interview with Iris Rowlee, Sommbasator for Conegliano Valdobbiadene Prosecco Superiore DOCG in this video.

Conegliano Valdobbiadene Prosecco Superiore DOCG is known as the Prosecco Superiore region of Italy. This area, situated in the hill towns and valleys between Venice and the Dolomites in Veneto in Northeast Italy, was recently recognized as one of the newest UNESCO World Heritage Sites. 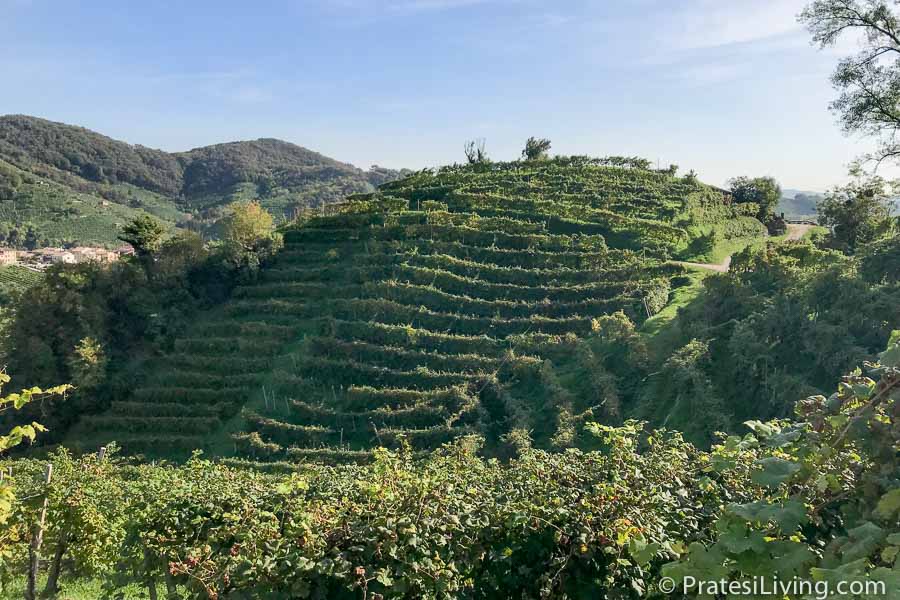 The primary grape used to make Prosecco Superiore is the Glera grape, and the sparkling wine must have at least 85% Glera in the blend. The remaining 15% is usually comprised of Chardonnay or Pinot in 95% of the production. Some local varieties such as Verdiso, Binachetta, Perera, and Glera Lunga may also contribute to the 15%.

Conegliano is also home to Italy’s first School of Viticulture and Oenology, which was founded in 1876. Today, the school is filled with eager young students interested in becoming winemakers and wanting to learn about the research and experimentation to implement modern and sustainable viticulture. The school also offers the degree course in Viticultural and Oenological Sciences and Technologies of the University of Padua.

This delicious sparkling wine varies from producer to producer, but the wines I tasted were very different from the Prosecco I knew in the U.S. In contrast, the wines of this region were very crisp with smaller bubbles and had a more elegant finish – they were not the big fizzy glasses of sweet sparkling wine I was accustomed to at home. The wines were also far more sophisticated in taste.

After a short amount of time in the glass, the carbon dioxide that produces the bubbles releases into the air, and what remains is a wine closer to a still white wine rather than a sparkling wine. With this change, the wine evolves and the characteristics and earthiness of the soil, or terroir, in which the grapes are grown become more pronounced.

These distinct flavors are created by the rich fertile land and ancient soils of Conegliano Valdobbiadene that were fed over time by the movement of the lakes, sea beds, and glaciers of the Dolomites, which formed the hills. There is a unique micro-climate and micro-zones throughout the hills and valleys with moderate year-round temperatures and significant rainfall in the summer. There’s also variation of the exposure to and the direction of the sun on the hills, with most facing southeast. This creates warm afternoons and cool evenings, especially at the higher altitude vineyards.

What is the difference between Conegliano Valdobbiadene Prosecco Superiore DOCG and DOC Prosecco?

They are both made primarily from the Glera grape with small amounts of other varietals (as explained above). Conegliano Valdobbiadene Prosecco Superiore DOCG (Denominazione di Origine Controllata e Garantita or Denomination of Controlled and Guaranteed Origin) is the highest designation of quality made only in Veneto and between the hill towns of Conegliano and Valdobbiadene in 15 communes. DOC is the next highest designation and is made in nine provinces in Veneto and in the Friuli Venezia Giulia regions.

There is also a Prosecco Superiore DOCG version from Asola, which is comprised of 19 municipalities in the Province of Treviso.

You will find wines in this region that are labeled as spumanti. To quickly summarize the difference between these wines, Spumante is a fully sparkling wine, such as an Asti, that has a full second fermentation. This produces larger bubbles that are more pronounced on the tongue. Prosecco can be a spumante, but it can also be frizzanti (lightly sparkling), which goes through a partial second fermentation, or tranquillo (still), which has no fizz or bubbles at all because there is no pressure in the bottle.

The scenery here is nothing short of spectacular with its panoramic vistas and patchwork landscape of steep terraced hills, woodlands, and meadows. UNESCO’s description reads: The landscape is characterized by ‘hogback’ hills, ciglioni – small plots of vines on narrow grassy terraces – forests, small villages and farmland. For centuries, this rugged terrain has been shaped and adapted by man. Since the 17th century, the use of ciglioni has created a particular chequerboard landscape consisting of rows of vines parallel and vertical to the slopes. In the 19 th century, the bellussera technique of training the vines contributed to the aesthetic characteristics of the landscape.

“Bellussera” vines are known as star-shaped wine-growing. This ancient system was invented at the end of the 19th-century to combat the spread of Peronospora. With this design, wires are connected between the grapevines approximately three yards above the ground. They are then arranged in a pattern which forms a star. These overhead vines were only used in the plains, not in the hills, but the method was abandoned due to the quality of the grapes and wines it produced. The vine breeding system in the hills is known as “double-cappovolto or cappuccina” and sometimes “Sylvoz.“ 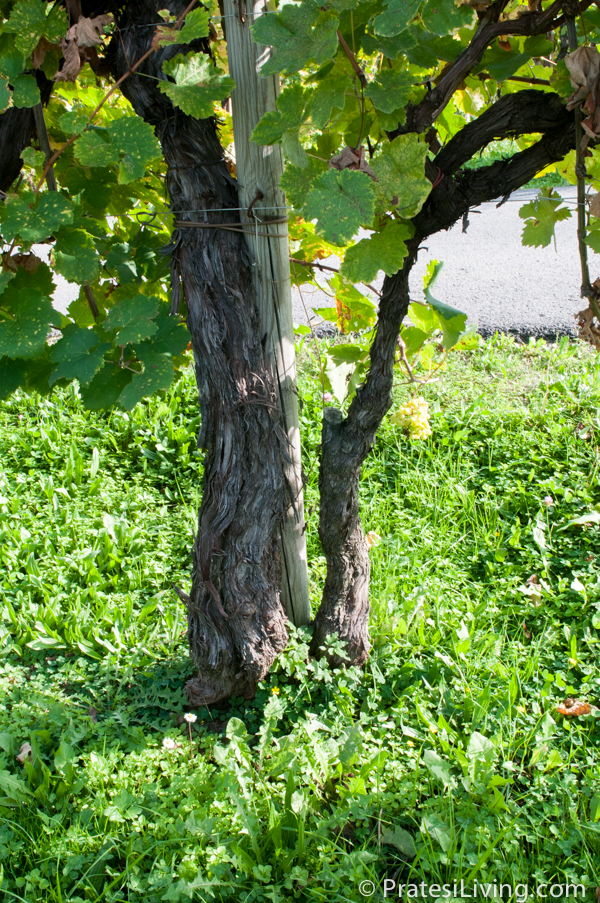 Some of the older vines date back 100 years or more

The people of this region are very honored by the UNESCO distinction following a 10-year effort to have the Prosecco Hills of Conegliano Valdobbiadene designated as a UNESCO World Heritage Site. Did you know that Italy has more UNESCO sites than any other country in the world?

The hills of Conegliano and Valdobbiadene are now the eighth UNESCO World Heritage site in the Veneto region and the 55th site in Italy. The area is also the 10th site in the world to be recognized as a “cultural landscape.” UNESCO describes these as “landscapes that are representative of the different regions of the world. Combined works of nature and humankind, they express a long and intimate relationship between peoples and their natural environment.”

The Town of Conegliano

While visiting the hills of Prosecco di Conegliano and Valdobbiadene, I stayed in the walled medieval town in Conegliano’s historic district. The locale was an ideal base from which to explore the wineries, vineyards, abbeys, churches, rustic farmhouses, restaurants, and hill towns of the region. In the mornings, I could walk the quiet streets before venturing out for long, busy days spent tasting, dining, and touring along the Prosecco Road.

Perched high above the town is the Castle of Conegliano. Its imposing tower is visible in the daytime, but in the evening, it’s magical to see it lit up from below in Cima Square. One morning, I decided to take the long steep climb up Calle Madonna della Neve for a quick visit to the castle. Once there, I was rewarded with an up-close look at this well-preserved castle and impressive views overlooking Conegliano and the surrounding area.

Another highlight of visiting the town is Friday’s market day. Spend a few hours wandering through the maze of trucks, booths, and vendors with their overwhelming displays of clothing, accessories, kitchen goods, and local foods.

And in the evenings, after dinner, stroll the cobblestone streets to take in the local nightlife as residents gather in the town square, some with their children and dogs, and at bars sharing conversation over a glass of wine, an Aperol Spritz, or strong Italian coffee. 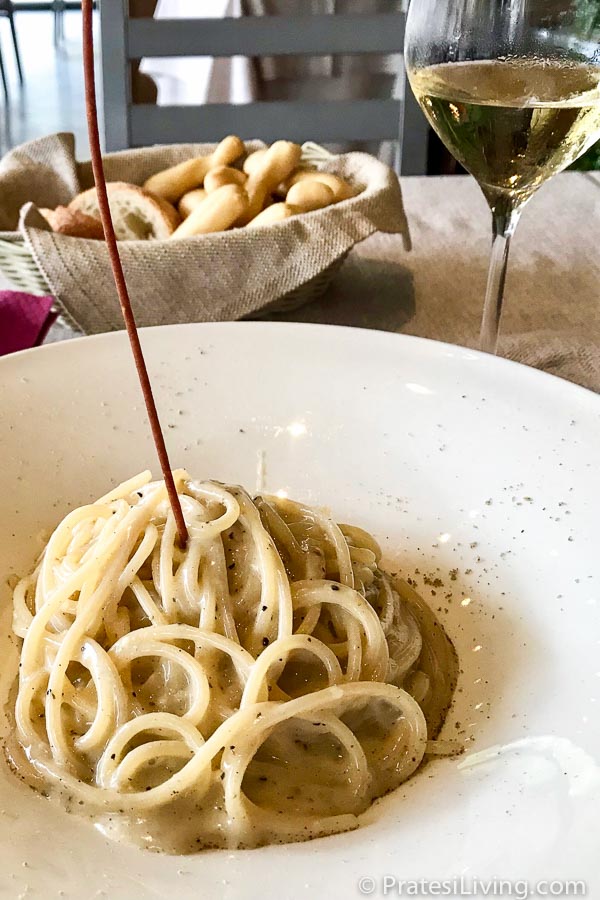 Page: 1 2
We participate in the Amazon Services LLC Associates Program, an affiliate advertising program designed to provide a means for us to earn fees by linking to Amazon.com and affiliated sites.
posted on February 20, 2020 in Europe, Travel
0 comments »