Our work has appeared in

Our photographs and recipes are featured on:

Planned and hosted Food Blog Forum Atlanta with Jaden Hair (Steamy Kitchen) and Diane Cu and Todd Porter (White on Rice Couple) in September 2010.  This was the first ever food blogger’s conference to take place in the Southeast. 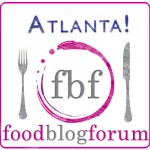 Presented in a panel discussion on Social Media at the annual conference of the ANA (Agritourism Networking Association) of North Carolina in Pinehurst, NC – February 2011.

Presented in a panel discussion about Ethics and Integrity in Blogging at IFBC in New Orleans, LA –  August 2011.

Spoke on the topic of Building a Better Blog at Food Blog South in Birmingham, Alabama – January 2014.