Most recently, Matt formed a partnership with Woodford Reserve to create several new products, including the Woodford Reserve Spiced Cherry Bitters, which were released with rave reviews.  Think of the endless possibilities for those cocktails…they could even be served with a slice or two of Sorghum Glazed Bacon.  Hmmm…

Thickly sliced applewood smoked bacon works best for this recipe.  You don’t want a heavily smoked bacon, but rather, a milder, almost sweet bacon.  You will achieve the smoky flavor with a touch of heat from the Bourbon Smoked Paprika.

Sauté the bacon in a pan, using a bacon press if possible, to flatten the bacon.  It will brown evenly and make for a nicer presentation if you are leaving the slices whole when serving.  I sautéed the bacon until the meat was just slightly brown, but the fat was not.  Don’t overcook the bacon as you will continue to cook the bacon in the oven and the sorghum glaze will also help to further cook and brown the bacon. 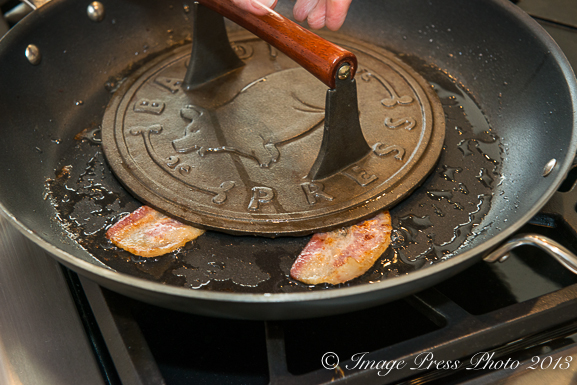 Use a bacon press to keep the bacon flat and even 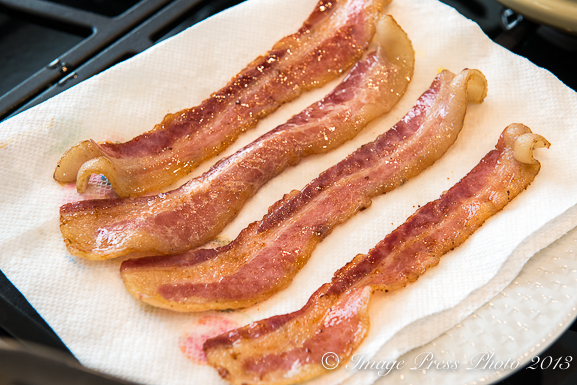 Drain the bacon on paper towels to remove the excess fat

Place the bacon slices on an oiled rack over a pan covered in aluminum foil (for easy clean-up).  Brush both sides of the bacon slices with the glaze.  Place in a preheated oven at 375 degrees for approximately seven to ten minutes.  Be sure to check the bacon frequently as it can quickly become too brown due to the sugar content in the sorghum. 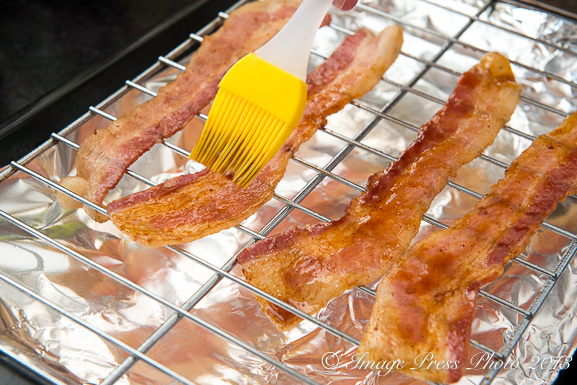 Brush the bacon slices with the sorghum glaze

Remove the bacon and glaze both sides again, returning to the oven to cook another two to four minutes, checking constantly.  You want the bacon to be beautifully glazed and browned, but not burned.  When the bacon is removed from the oven, the slices will harden and crisp up from the sugary glaze and will be perfect to chop or serve in sandwiches.  Remember, the more you open the oven door, the longer it will take to cook.  If you can peek in through a glass window to check the browning process, that will leave the heat in your oven and the bacon will brown quicker. 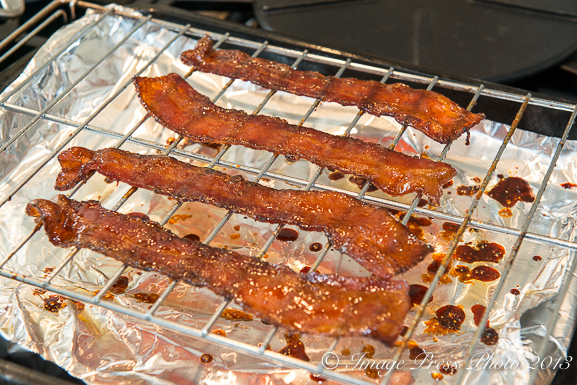 The finished slices should be beautifully browned

Can’t you just imagine these sweet and smoky bacon slices in a BLT with some of summer’s ripest and juiciest heirloom tomatoes, on slices of homemade yeasty white bread, topped with crisp leaf lettuce and slathered with an eggy mayonnaise?!  July can’t come fast enough!

I hope you will try some of the Bourbon Barrel Food products in your own recipes.  If you head over to the Bourbon Barrel Foods website, be sure to take a look at one of my favorite items that Matt sells that is not food, an Eat Your Bourbon t-shirt.  Now, I think after this recipe, we need to create an Eat Your Bourbon with Bacon t-shirt.  Whadya think? 😉 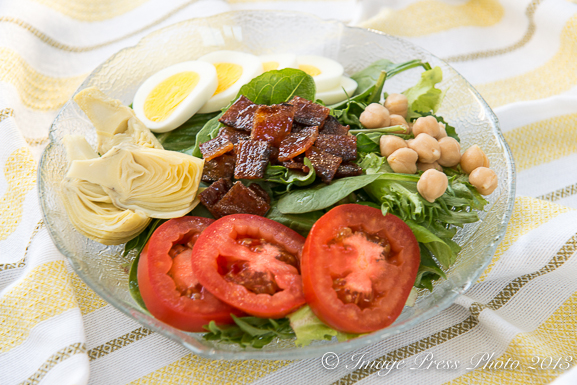 * Please contact Bourbon Barrel Foods directly if you are interested in ordering an Eat Your Bourbon t-shirt, Pure Cane Sorghum or other products.

Glaze thickly sliced applewood smoked bacon with sorghum combined with Bourbon Barrel Foods’ Bourbon Smoked Paprika. The sweetness of the sorghum is balanced out with the heat of the paprika and has just a subtle hint of bourbon. Add the glazed bacon chopped in salads, use it for sandwiches, or just eat as a snack. It is almost like candy. 🙂 This recipe makes just four slices, but you can easily double or triple the recipe.

1. Preheat oven to 375 degrees. Blend the sorghum with the paprika in a small dish with a whisk and set aside.

2. Cook bacon slices in a large skillet until the meat begins to brown slightly and the fat is still not cooked all the way through (you do not want the bacon to be fully cooked since it will cook further in the oven). Use a bacon press to keep the bacon slices flat, if you have one. Remove the bacon. Drain on paper towels, patting the excess fat.

3. Place an oiled wire rack on top of a pan that has been lined with aluminum foil (this will allow for an easier clean-up). Place the bacon slices on the rack and brush both sides with the glaze. Place in preheated oven and cook for about seven to ten minutes, checking after seven minutes. You don’t want the bacon to brown too quickly.

4. Before the bacon becomes completely brown and cooked, remove the pan and baste each slice again with the glaze, on both sides. Return to the oven and cook for another two to four minutes. Again, check to be sure the bacon is not browning too quickly. The sugar in the sorghum can quickly cause the bacon to burn.

5. Remove from the oven and let the bacon sit until it cools. It will harden and crisp up as it cools. Use in recipes, as desired.

We participate in the Amazon Services LLC Associates Program, an affiliate advertising program designed to provide a means for us to earn fees by linking to Amazon.com and affiliated sites.
posted on February 22, 2013 in Appetizers, Condiments, Recipes
4 comments »