We tasted the “bourbon” that comes out of the distiller and it is white (just like white lightening) and is what people used to drink and some still do (moonshine!). It becomes the bourbon that we know through the aging in the oak barrels that have have been slightly charred. This is what creates the caramelization and the color that we associate with bourbon. During this maturation process (which is between 4 to 7 years), the bourbon will take on the flavors of soft oak, caramel, cinnamon and clove (the flavor profile for Woodford Reserve). 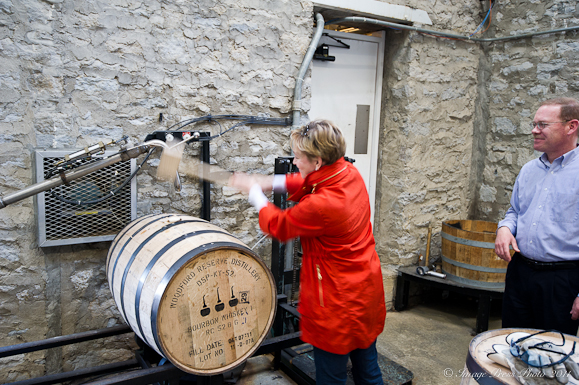 They are trusting me to plug the bung hole?!

Woodford Reserve is the only single bourbon brand distiller. Chris told us that the palate in tasting bourbon is now more important than ever because they are selling bourbon all over the world. It is all about a “consistent flavor profile”.

Chris told us that bourbon sales have only increased by 1% in the past year, which is surprising. I thought with all the hype about bourbon (both in drinking and in cooking) and groups like the Bourbon Women (which is a popular, fast growing organization) that the rate of sales would be greater. He said that the older brands are in decline (like Old Crow), but that newer, smaller brands are experiencing astronomical growth (remember they are still made by one of the ten distilleries that exist in the U.S.). 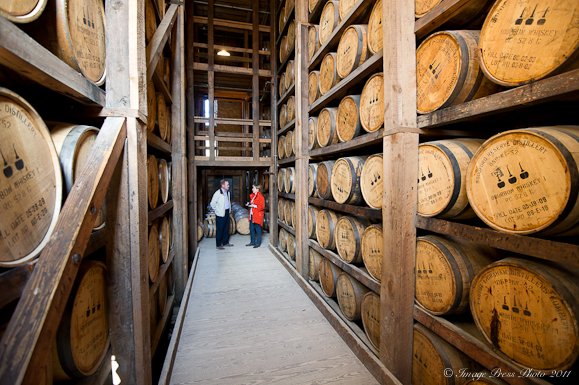 The other brands that are experiencing major growth are Jack Daniels, Knob Creek, Maker’s Mark and Woodford Reserve. In fact, their sales were up 18% from last year. That pace is difficult to keep up with when they only produce 50,000 cases a year and do not have the capacity to produce more. They operate year round to keep up with the demand. Please don’t run out of bourbon! 😉

Chris has a really tough job tasting all that bourbon, so I wanted to know how you become a Master Distiller. He has been with Brown-Forman for 18 years and has worked his way through the company and has worked for several other brands under the company umbrella, so I guess he might know a thing or two about bourbon. He has been the Master Distiller at Woodford Reserve for 7 years. This job is one that you retire from and you certainly don’t leave it until you aren’t interested in tasting any more bourbon. Guess he’s not leaving the position any time soon! 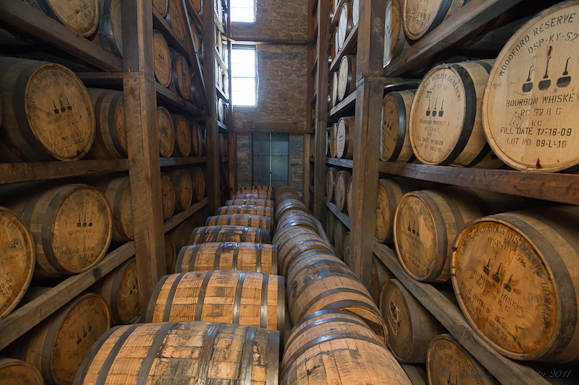 One of the major differences in Woodford Reserve is the way they decide to batch and bottle their bourbon. They will start with samples from 8 different barrels that are sent off to a panel of tasters once it has passed Chris’ sophisticated palate. Based on this tasting, it will be narrowed to 4 barrels that have similar characteristics. From there, they will combine 2 barrels and bottle those together.

That is why you will never see a year on a bottle of Woodford Reserve. It could be a combination of different years. It is all about the taste and not the age. The barrels mature at different times based on factors like the temperature in their warehouse and how the barrels breathe over time. We were extremely fortunate to be with Chris when he tapped a barrel for us to taste!

By the way, if you have $10,000 and several friends, you too can taste a few barrels and combine the two you like most to create your very own batch of Woodford Reserve!

Chris is also working on the latest Master’s Collection, which is his personal project.  The current one (which we saw the new barrels for) is a Double-Oaked Bourbon.  This will be aged in American Oak barrels that have been slightly charred.  The final results should be buttery, with notes of honey and vanilla.  Sign me up for one of those barrels!

Page: 1 2 3 4
We participate in the Amazon Services LLC Associates Program, an affiliate advertising program designed to provide a means for us to earn fees by linking to Amazon.com and affiliated sites.
posted on May 7, 2011 in Baked Goods, Recipes, The South, Travel
14 comments »