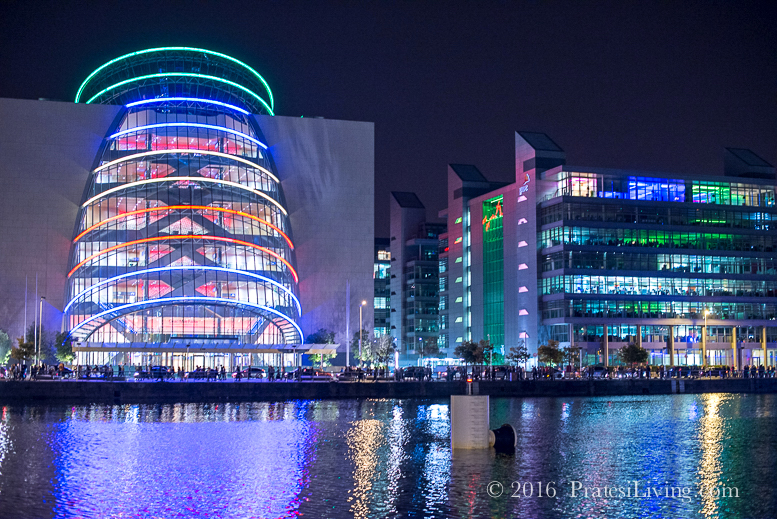 Ireland took our breath away. From the power of the Atlantic Ocean crashing onto the shores, to the awe-inspiring Cliffs of Moher rising up from the sea, the idyllic countryside painted in brilliant shades of green, majestic rivers, and the white granite mountains and rocky beaches, and of course, the craic – the fun people have who live here. This is Ireland. But change is underway on the Emerald Isle and a tiger has been turned loose, especially in the city of Dublin. How about a little craic at a local pub? 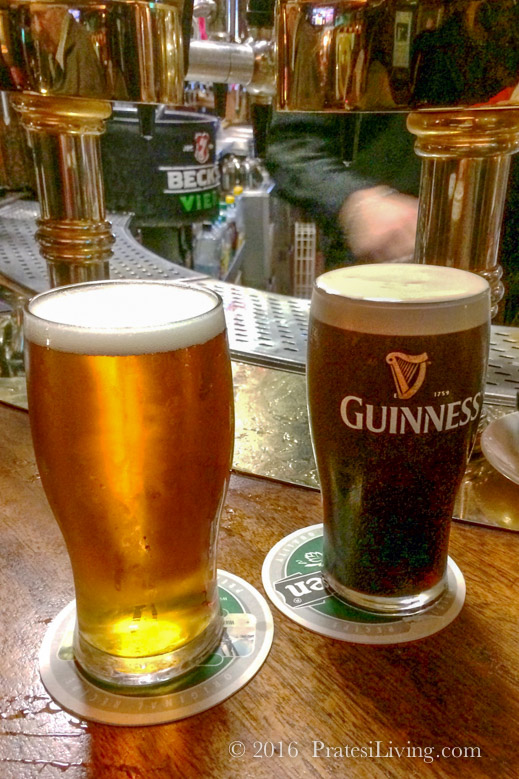 A visit to the country would not be complete without spending a few days in Dublin, the capital of Ireland, where the Guinness flows, the music inspires hand clapping and foot tapping, and the Georgian architecture takes you back to a more romantic time. And while you may have visions of what you think this historical city looks like, their Celtic Tiger is changing the look and feel of the country, particularly in Dublin, its birthplace. 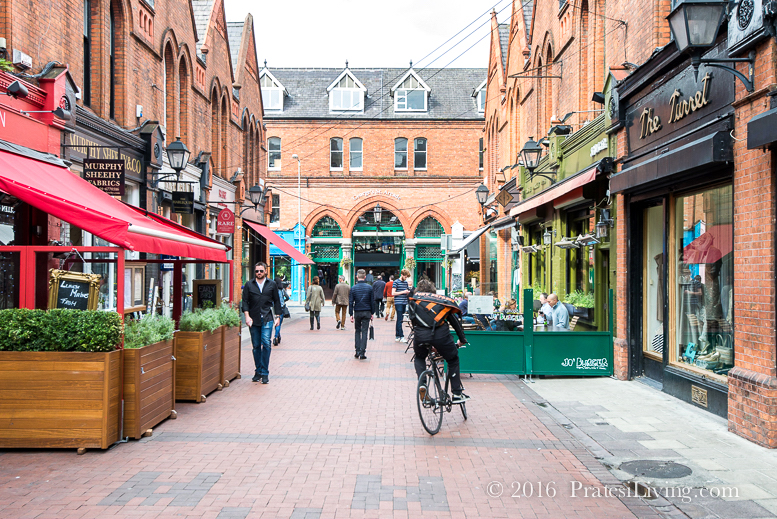 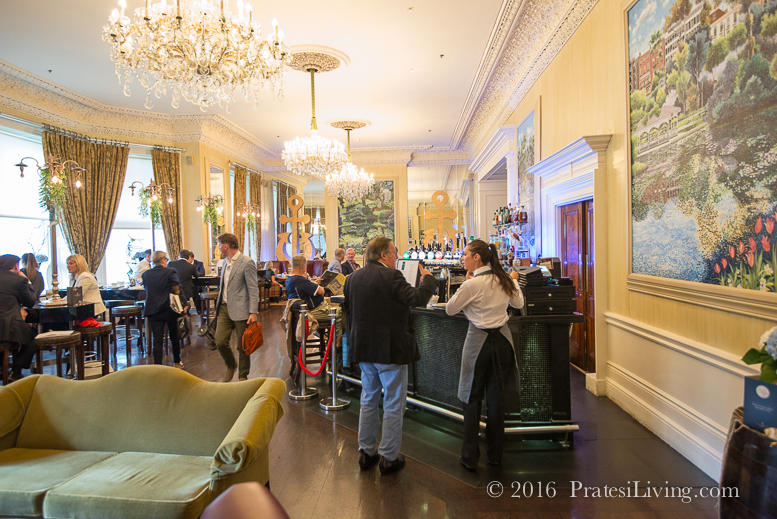 It wasn’t that long ago that many people in Ireland were unemployed and the country was in deep recession, brought about by their aggressive money lending policies. Their banks required a bail out during the financial crisis of 2008-2009. But it was their low corporate tax rate and well-educated workforce that became a magnet for American multinationals that catapulted this country to the strongest economy in Europe with major pharmaceutical, technology, and social media corporations establishing their European headquarters in Dublin. This economic transformation is known as the Celtic Tiger. 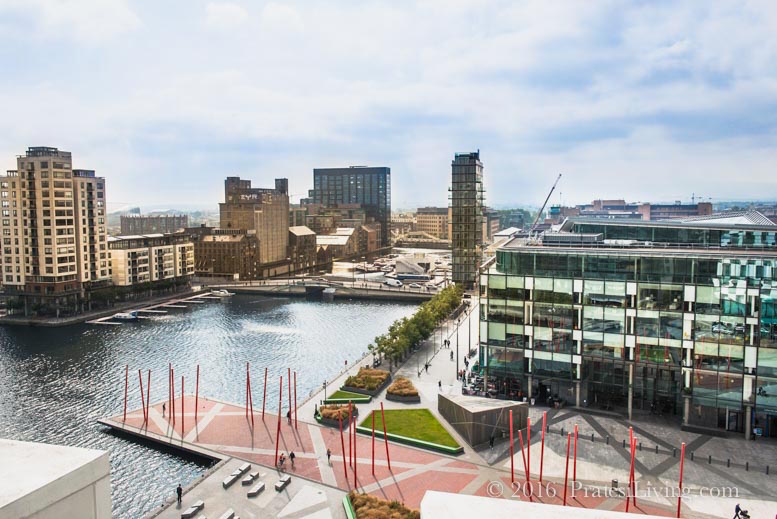 Companies like Facebook, Google, Amazon, Cisco, eBay, Twitter, Accenture, Yahoo, and Linkedin, to name a few, have redeveloped the area known as “The Docklands,” a former warehouse district along the River Liffey, where new construction is changing this part of the city. Rather than building traditional Georgian architecture to replace the older buildings, the area is being developed with glass high-rises with modern architecture and amenities as corporate transplants from around the world work alongside thousands of local Irish professionals in what is now known as the Silicon Docks. The Silicon Docks is also home to new apartment buildings, retail and restaurant spaces, a 22,000-seat theater, and a 5-star luxury hotel, The Marker Hotel. 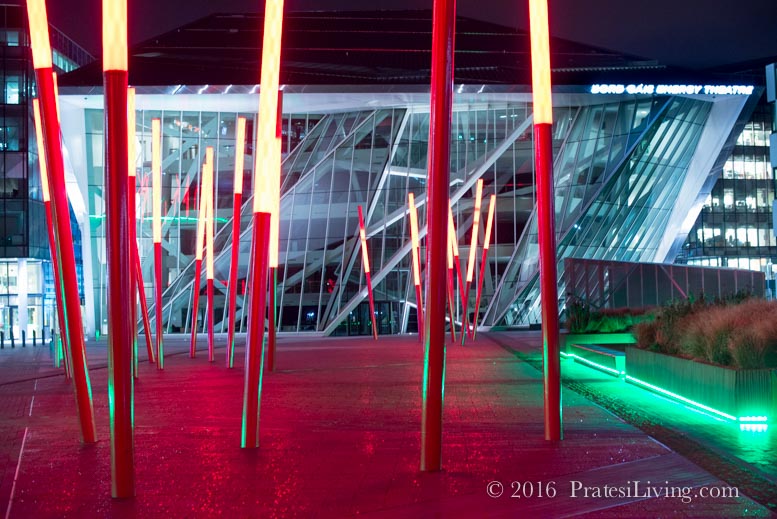 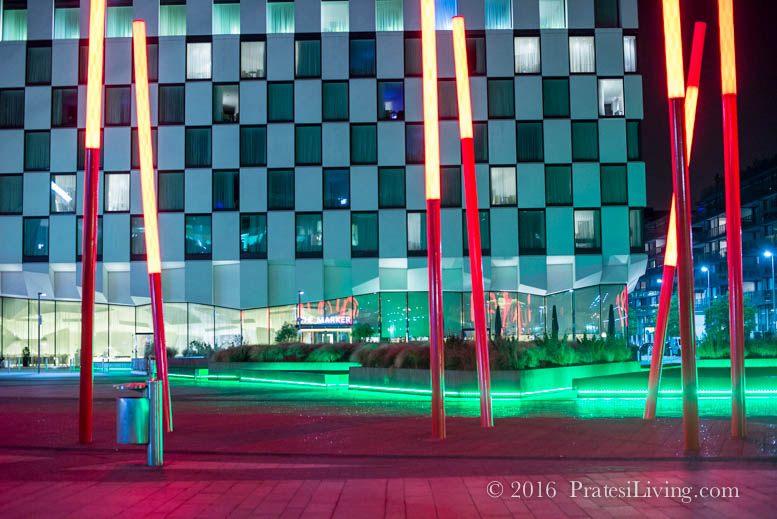 We chose to stay in this newer section of town at The Marker Hotel to get a different perspective of the city. With a private guide and a leisurely walk for half-a-day around the better-known and older parts of town, we were able to learn quite a bit of history and plan the remainder of our Dublin adventure exploring on our own. The city is compact and easily walkable. There is also a good bus system and DART (Dublin Area Rapid Transit), their train system, which runs to the suburbs and offers views of Dublin Bay along the way. 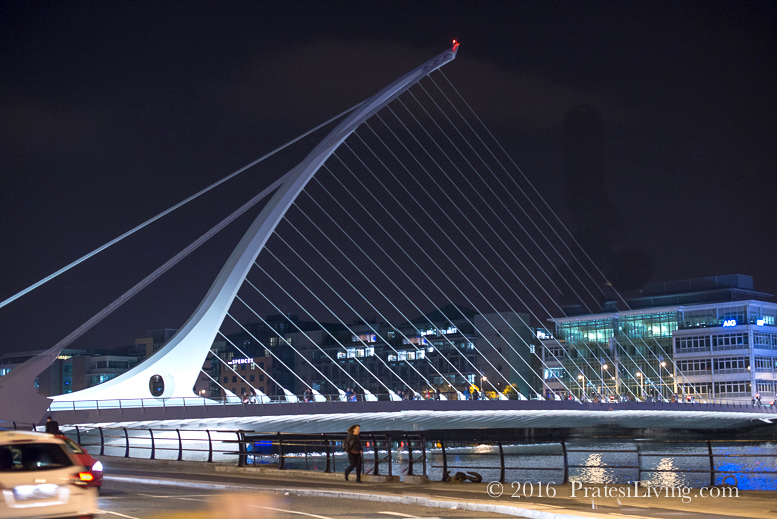 The symbol of Ireland, a harp – The Samuel Beckett Bridge 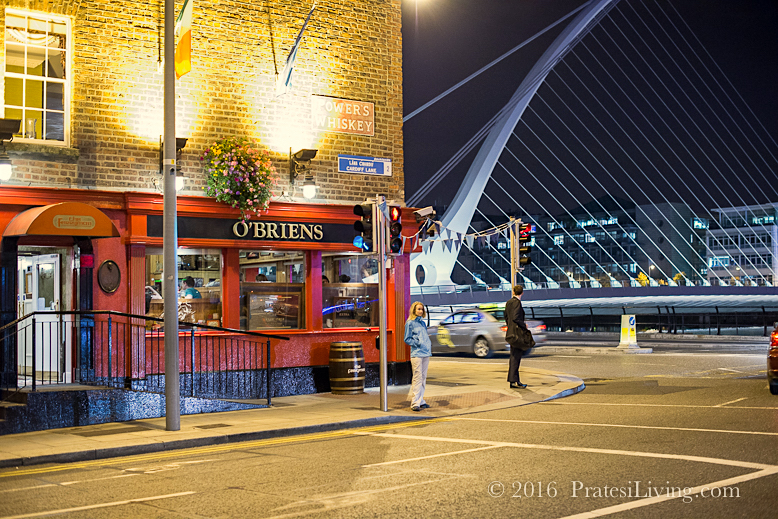 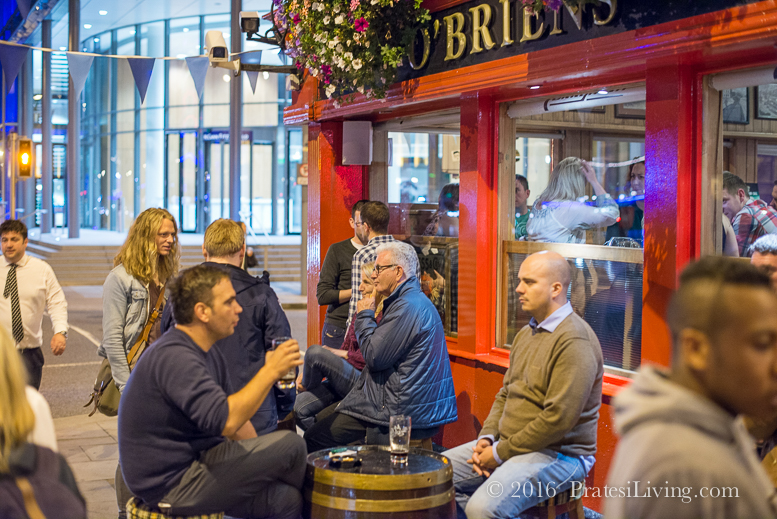 48 Hours – Where to Experience Quintessential Dublin

Imagine lanterns illuminating the stone-lined streets and music pouring from local pubs with people laughing, dancing, and singing to some of their favorite Irish songs. Here’s where to find it – the Temple Bar neighborhood. Located in the heart of central Dublin, this area is known for its lively nightlife. The Temple Bar Pub, The Auld Dubliner, and The Palace Bar are some of the best-known pubs in the area. Temple Bar is also a community where you’ll find restaurants and unique vintage shops. On Saturdays, there is the Temple Bar Food Market. Wander the streets of this cultural center to discover local and organic cured meats, Irish cheeses and butter, their tasty brown bread and other artisan breads, and fresh produce from neighboring farms. 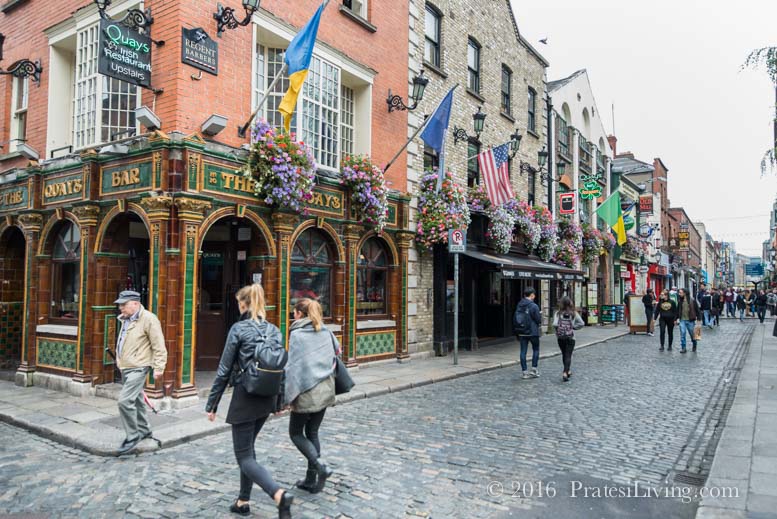 The Quays Bar and Irish Restaurant in Temple Bar 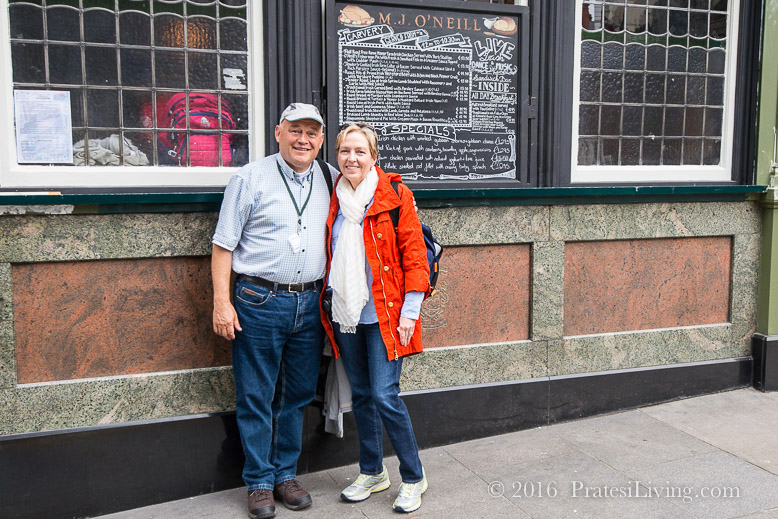 Touring Dublin with our guide Liam

The famous pubs are a must when visiting the city, and especially a few of the iconic ones such as The Brazen Head, reportedly the oldest pub in Ireland dating back to 1198. Bartenders at this pub have poured a pint (or a few) for the likes of musical artists such as Van Morrison, The Dubliners, and Tom Jones and hosted many of the famous literary notables of the city such as Jonathon Swift, the author of Gulliver’s Travels, and James Joyce (Ulysses). If you believe in urban legend, Robin Hood may have also paid a visit to this historic pub (with or without his band of Merry Men). There are many “Best of” or “Most Popular” lists of pubs, but with a pub at almost every turn, if you hear music you like, then pop in and order a pint. No matter which pub you choose, you’re sure to find some good local Irish craic. 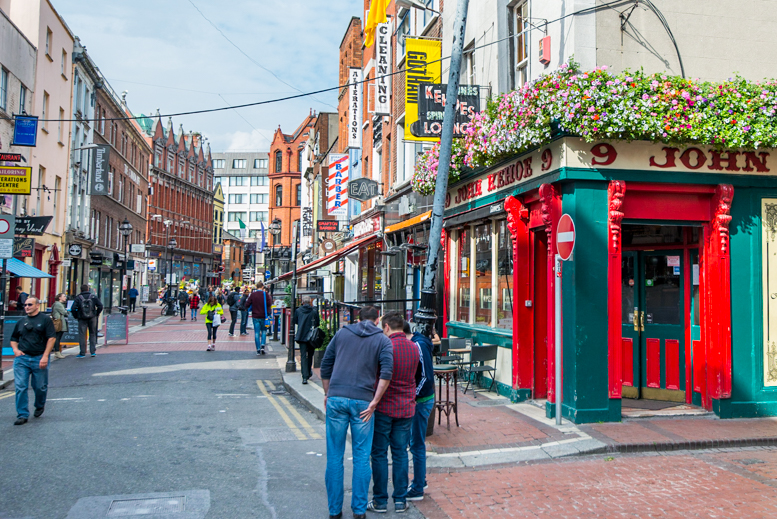 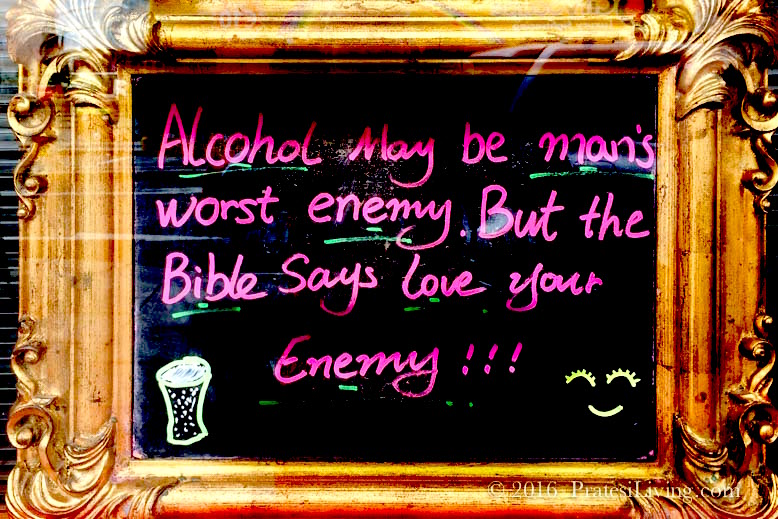 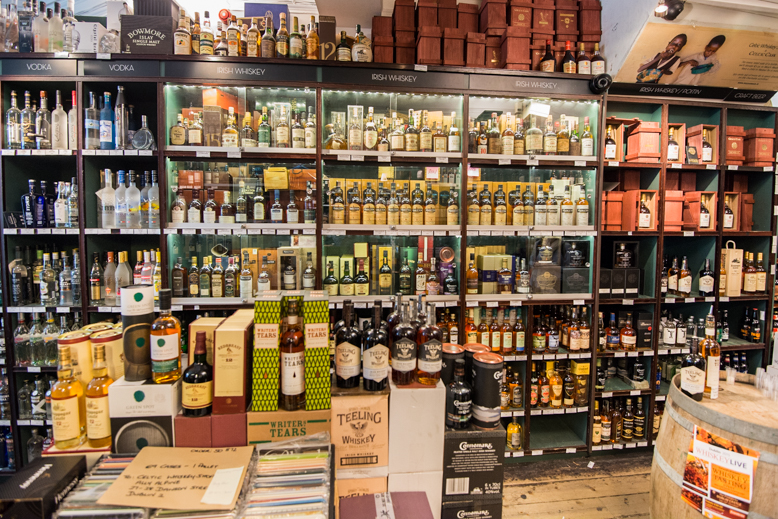 Walls of whiskey and other distilled spirits

If you’re into whiskey, then visit the Celtic Whiskey Shop & Wines on the Green for the history and background of Irish whiskey (and other whiskeys) and a whiskey tasting. Winner of the Best Retailer, Worldwide in the World Whiskey Awards in 2013, these folks know just a wee bit about whiskey. They also have the largest selection of whiskey in all of Ireland. Sláinte! 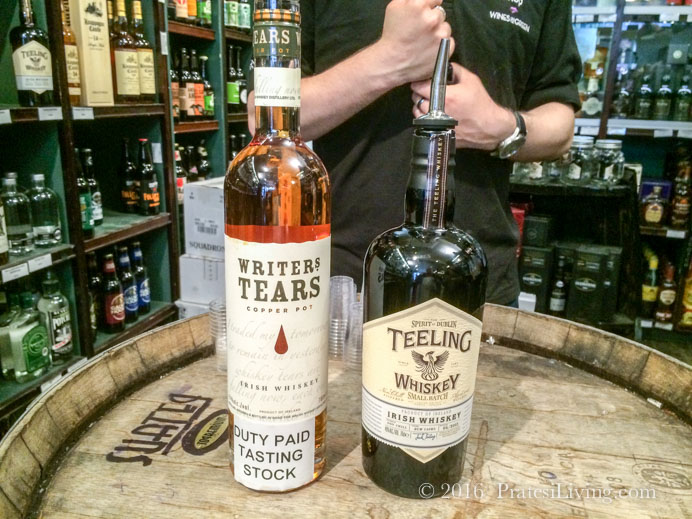 Time for a wee bit o’whiskey 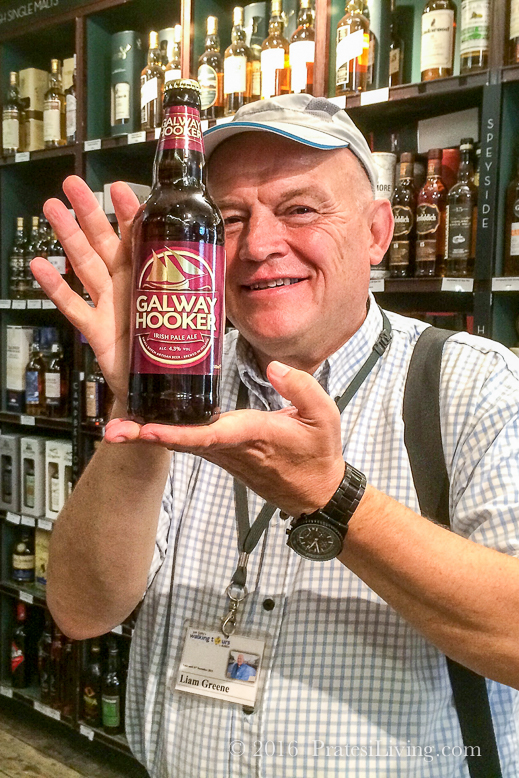 Liam with his Galway Hooker 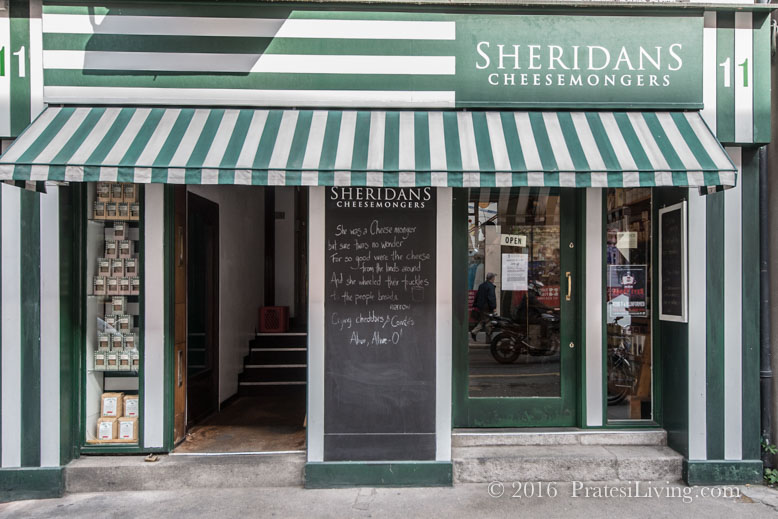 With lush green grass, green clover, and farms that raise beautiful cattle and sheep, you can be sure that dairy products are of the highest quality in Ireland. Irish cheese is a must and Sheridans Cheesemongers will provide a lesson in local cheeses and a tasting of some of the smaller producers’ fabulous farmhouse Irish cheeses. Dominique, one of the cheesemongers, told us that many of their cheeses are made by one person or a family, so they’re very individual in style and may change over time as the producers modify their cheesemaking process. And even though several families may make the same type of cheese, it will usually be made using different methods representative of the region and ultimately produce a unique cheese to each producer with different textures and flavors. 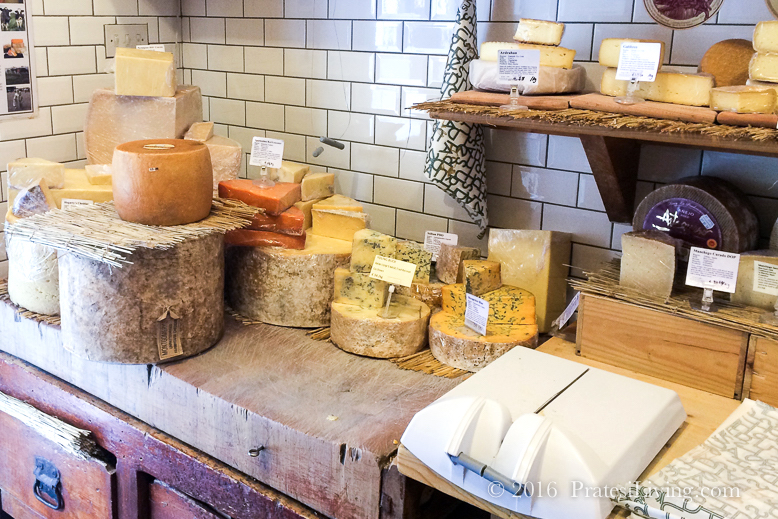 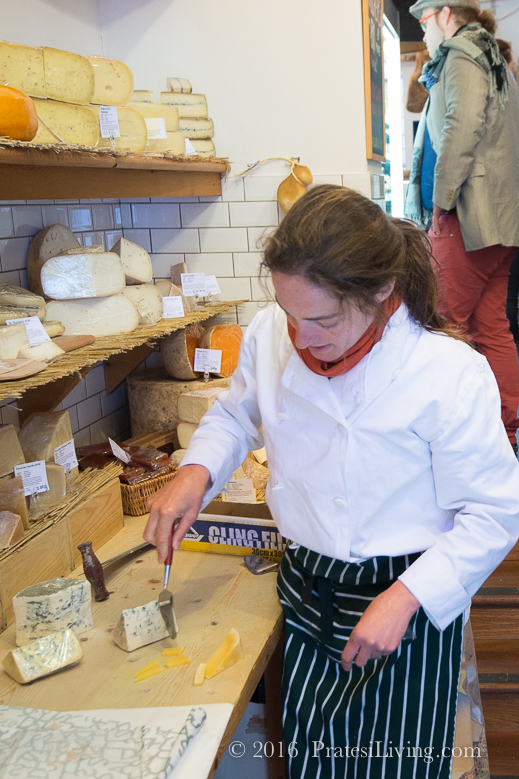 For example, the Durrus cheese made in Coomkeen along the Sheep’s Head Way on the Wild Atlantic Way, in West Cork, has a mild flavor of the sea from the grasses being washed with the spray of the salty ocean waters and the cows feeding on those grasses. In comparison, the cheeses coming from the Midlands and County Cork have a very rich and buttery flavor. The end product is very much based on the terrior and the entrepreneurial spirit of the cheesemaker. 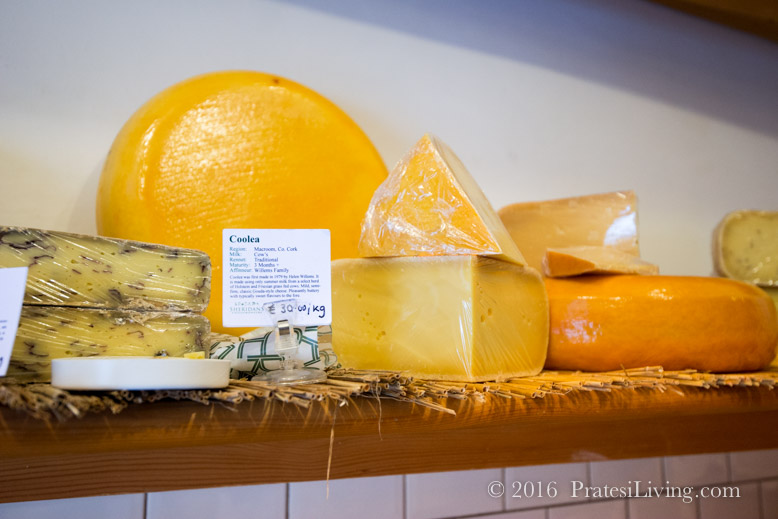 So many cheeses to taste!

Be sure to try the Cashel Blue, a blue Roquefort style cheese made in Tipperary by the Grubb family. This delicious cheese may be Ireland’s most famous cheese and is known internationally. It’s also featured on many restaurant menus and in cookbooks. It turns out that this mild and buttery blue cheese was the result of an accident in the recipe making process, but a mistake that has been very well received.

Page: 1 2
We participate in the Amazon Services LLC Associates Program, an affiliate advertising program designed to provide a means for us to earn fees by linking to Amazon.com and affiliated sites.
posted on January 20, 2016 in Europe, Travel
0 comments »