How to make Green Eggs and Ham and a Dr. Seuss Cookbook Giveaway! 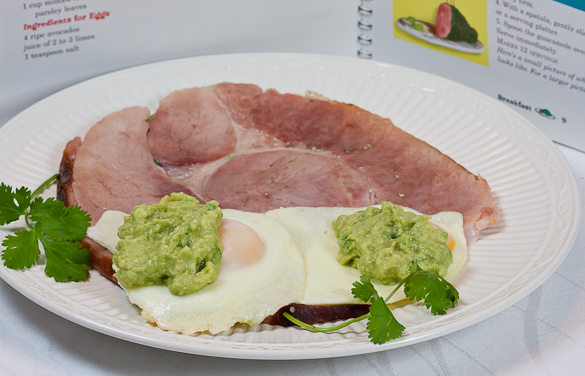 I do so like
green eggs and ham!
Thank you!
Thank you,
Sam-I-am! 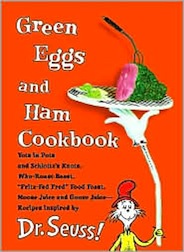 I am sure that you know by now that I am totally crazy and should be locked up! like to have some fun with this website.

Do you remember when I made the Cat in the Hat cake for my 50th birthday?  I had so much fun with that post, I could not resist doing another Cat in the Hat post to celebrate my new site.  I did say I would have a FUN giveaway just the other day in my Meyer Lemon and Amaretto Marmalade post!  Little did you know what was to come… 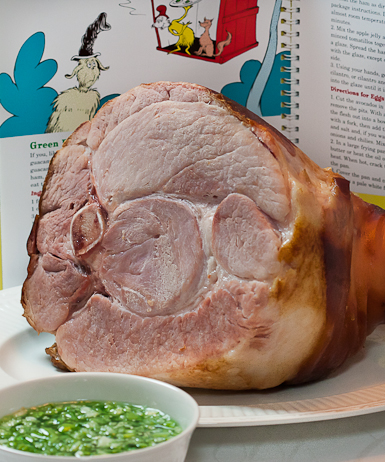 You won’t believe what I did to this Smithfield ham!

Now, what could possibly be more fun than giving away a copy of Dr. Seuss’s Green Eggs and Ham Cookbook?  (Be sure not to answer that in the comments section!)  I also bet you have been wondering (and I know I sure have for 50 years!) what the heck Green Eggs and Ham tasted like.  Now I can tell you!

I would suggest you not muck up your perfectly good ham with this green gunk on the outside.  It is fine for kiddies for a party, but the mint jelly and tomatillo mixture didn’t work like it was supposed to and cilantro and mint jelly just don’t belong on a ham!  I knew that going into this, but thought maybe I was missing something.  Prepare your ham using this this recipe by Dave Lieberman instead and then make these ham and cheddar paninis with the leftovers. 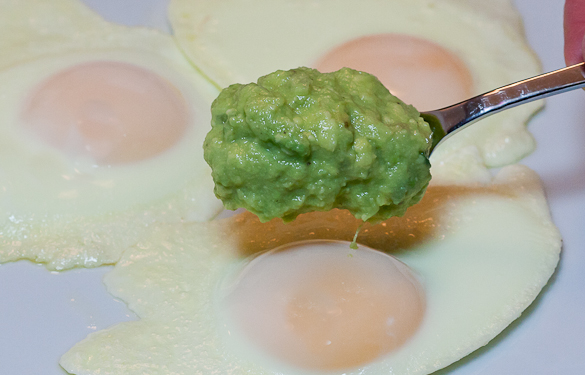 This combination is pretty tasty!

The eggs are actually pretty tasty with the guacamole, however, my favorite recipe for guacamole is Ina Garten’s, and I would definitely make that next time.  The verdict is that this dish is not so bad if prepare your ham a different way.  What could be so bad about ham and eggs with guacamole?

This cookbook is full of recipes that are made from scratch that would be fun to make if you are nuts like me, but also fun to make with any little ones that you might have running around your kitchen!  I would say it is definitely a kid’s cookbook, but there were some other recipes that looked pretty tasty.  The green eggs and ham would be an awesome surprise dinner for a kid’s party!  Be sure to carry it on on one hand like the Cat in the Hat. 😉 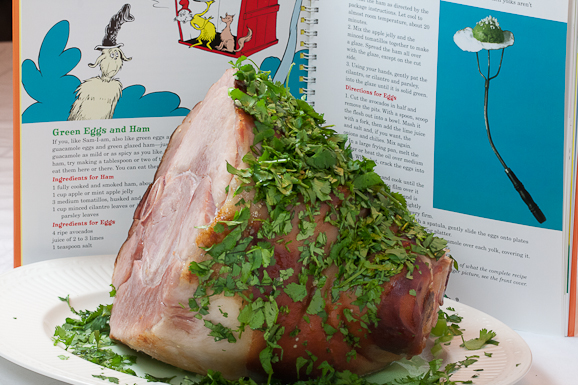 If you try this recipe, I would suggest using parsley rather than cilantro.

Just think, if you win, you can create such culinary delights as Schlopp with a Cherry on Top, Nupboard’s Nuggets, Brown Bar-ba-loots’ Truffula Fruits, Schlottz’s Knots and Yot in the Pot!  Who wouldn’t want to win this cookbook?!!

Here is how you enter:
Leave a comment on this post telling me what your favorite Dr. Seuss book is!

Extra Entries:
Here are three additional ways that you can enter.

2. Tweet the giveaway.  I just entered the Green Eggs and Ham Cookbook Giveaway at Bunkycooks.http://tinyurl.com/4trjute

*** Please be sure to leave separate comments as they are easier to count! Thank you!

I will be using random.org to pick the winner.

This giveaway ends at 5 pm EST on Friday, February 25th.

I will notify the winner by email. Please get back to me with your shipping information within 48 hours.  Regretfully, this can only be shipped to a winner in the U.S. or Canada. 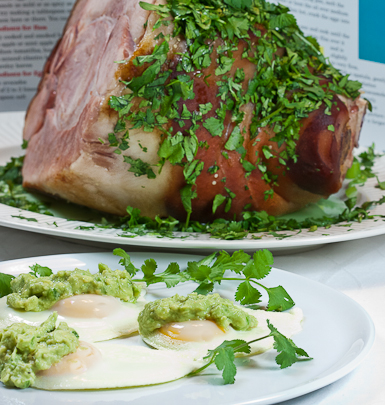 This would be lots of fun to make for a children’s party.

Eggs
4 ripe avocados
Juice of 2 to 3 limes
1 teaspoon salt
2 tablespoons white onion, minced (optional) I used the onion.
2 serrano chilies, seeded and minced (optional) I used the chilies.
Cholula sauce (several drops to taste) (I added this as I felt it needed more flavor)
Freshly ground black pepper (I added a few grinds of this)
4 ounces of butter or 3 tablespoons extra-virgin olive oil or other light cooking oil, such as canola or sunflower (I used butter)
12 large eggs

For ham:
Preheat oven to 300 degrees. Place ham on a rack in a roasting pan. Add 1/2 cup water or apple juice to the pan. Cover tightly with aluminum foil. Cook ham at 300 degrees for 1 hour, 40 minutes.

Remove ham from the oven and let cool to room temperature, about 20 minutes.

Mix the apple jelly and minced tomatillos together to make a glaze. Spread the glaze all over the ham, except on the cut side.

Using your hands, gently pat the cilantro, parsley or cilantro-parsley mixture into the glaze until it is solid green.

For eggs:
Cut the avocados in half and remove the pits. With a spoon, scoop the flesh into a bowl. Mash it with a fork, then add the lime juice and salt and, if you want, the onions and chilies. Mix again.

In a large frying pan, melt the butter or heat the oil over medium heat. When hot, crack the eggs into the pan.

Cover the pan and cook until the yolk has a pale white film over it and is slightly to very firm.

With a spatula, gently slide eggs onto plate or a serving platter.

Spoon the guacamole over each yolk, cover it.

*Cooks notes – If you want to make the ham for fun, then that is fine, however, the jelly and tomatillo mixture did not work properly. It was too thin and watery to cover the ham properly and there was a lot of waste. I would try heating up up next time and reducing it, then letting it come to room temperature. Maybe it will congeal more with that method.

I would also use parsley rather than cilantro. The cilantro flavor was not at all pleasant with the mint jelly and the ham.

Better yet, make the ham with the recipe I referenced above and then serve the eggs with that.

We participate in the Amazon Services LLC Associates Program, an affiliate advertising program designed to provide a means for us to earn fees by linking to Amazon.com and affiliated sites.
posted on February 18, 2011 in Main Dishes, Miscellaneous, Recipes
52 comments »

END_OF_DOCUMENT_TOKEN_TO_BE_REPLACED

52 comments on “How to make Green Eggs and Ham and a Dr. Seuss Cookbook Giveaway!”