I had to attempt another recipe out of the cookbook to see if I was being too critical.  The second recipe I made was a Chipotle Beef Chili.  Again, I followed the directions exactly as they were written.  Unfortunately, this did not turn out well either. 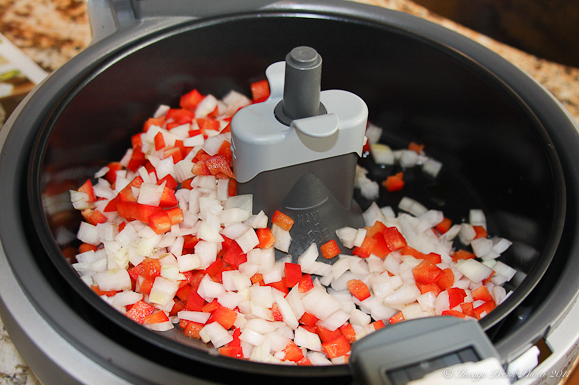 You begin by cooking the vegetables and then add the beef

The flavors were okay, but the moisture in the chili cooked off.  It was so dry that we added another whole can of tomatoes, but it still absorbed all the liquid, so the meat and beans had no sauce. 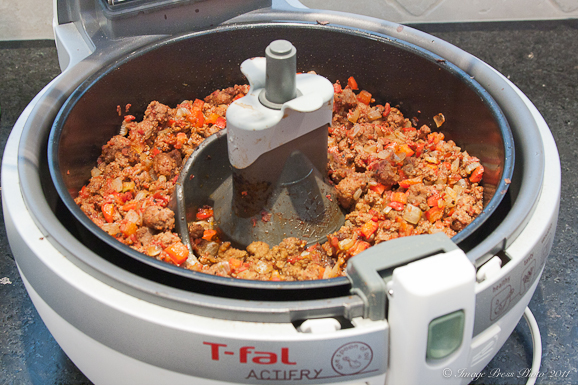 The heat source must have something to do with the absorption of the liquids in these dishes since both this dish and the Spicy Thai Chicken Curry needed much more liquid than the recipe originally called for.  I guess I have to ask if someone really tested these recipes.  I followed them precisely and these were my results.  Once again, I would say preparing chili in a more traditional manner in a pot on the stove would be my preferred method of cooking it.

On the positive side (I saved the best for last!), I did have success with frying shrimp.  I tried them several ways and they were all good.  The coating stayed on the shrimp and it cooked evenly.  I used bread crumbs and Panko and both worked well.  I had the best success when I put the Panko in a food processor for a few seconds and made the flakes a bit smaller.

The shrimp was best when prepared in smaller batches and with a bit more oil than is suggested for “frying” in the Actify.  I found that 1/2 pound of medium shrimp did well with about 1 1/2 tablespoons of peanut oil.

I really wanted to be able to say that I thought the Tfal Actifry cooker was awesome and that you should run out and get one, but I can’t quite yet.  I do like this cooker very much and the concept of the cooking process.  I have had a great deal of fun playing with it and will continue to use it for certain dishes.  I do like the idea that we can have some fried foods using just a couple tablespoons of oil.  The recipes I tried from the cookbook that is included were what was disappointing and not the actual cooker.  I plan to adapt some of my own recipes that I believe can be successfully prepared in the Actifry based on what I have learned so far.

Now for the best recipe…We really enjoyed this Panko Crusted Shrimp!  The shrimp were crisp and browned nicely.  They were not oily tasting like you would expect with traditionally fried shrimp, so we were excited.  I bought medium-sized local Georgia shrimp.  I served the shrimp with a Chili Garlic Glaze for dipping (the recipe is from Chef Craig Deihl at Cypress in Charleston, SC).  I made an Asian Slaw that was perfect with all the other flavors.  You could add some other ingredients to the slaw if you like.  I wanted something simple since the dipping sauce is so flavorful.

* If you do not have an Actifry cooker, you could fry your shrimp in a little peanut oil. 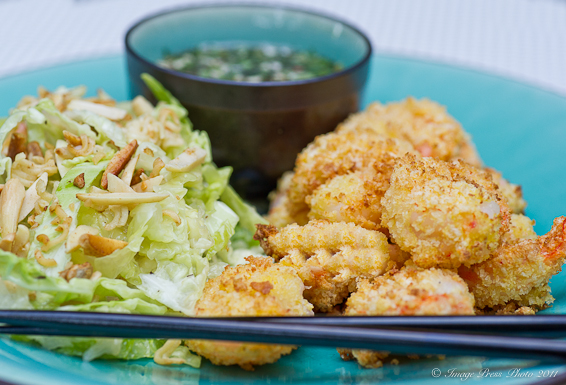 Dip the shrimp first in the flour mixture. Fully coat in the flour and then tap off the excess flour. Dip the shrimp next into the egg mixture, letting excess run off. Finally, dip each piece of into the Panko, being sure to coat completely. Set aside in a single layer on a large plate.

When ready to cook, if using the Actifry, place half of the shrimp in the cooker in a single layer. Drizzle with 1 1/2 tablespoons (or a little more) of peanut oil. Turn the cooker on and set the timer for 7 minutes. Check after that time to see if the shrimp have browned. You may want to cook them for another minute or two to brown a bit more. Watch them closely to be sure they don’t overcook. Keep first batch warm. Repeat cooking process with last half of shrimp.

For the Chili Garlic Glaze:
In a saucepan combine rice wine vinegar, sugar and salt. Place over medium-high heat and reduce by one-fourth. Mixture should have a syrup-like consistency.

Add cilantro, mint and basil to cooked mixture. Adding herbs to mixture when hot will cause herbs to turn brown.

Place in a container and keep refrigerated.

For Asian Slaw:
Shred or thinly slice the cabbage to a desired thickness for your slaw. Add the sliced green onions and toss lightly.

Melt the butter in a medium skillet over medium heat. Add the Ramen noodles, almonds and sunflower seeds. Stir and cook over medium heat until all of the ingredients are lightly browned, about 8 minutes. Place the mixture in a bowl and cool.

Whisk together the salt, oil, sugar, apple cider vinegar and soy sauce in a small bowl until dressing comes together. Set aside.

When ready to serve slaw, add dressing to the slaw, to taste. Check for seasoning. Serve topped with the Ramen noodle, almond and sunflower mixture. * Do not mix the dressing into the slaw until you are ready to serve it. It will wilt quickly.

We participate in the Amazon Services LLC Associates Program, an affiliate advertising program designed to provide a means for us to earn fees by linking to Amazon.com and affiliated sites.
posted on July 4, 2011 in Main Dishes, Product Reviews, Recipes
13 comments »