Interview with Chef Ming Tsai of Blue Ginger – Wellesley, MA and a recipe for Three-Bean Chili 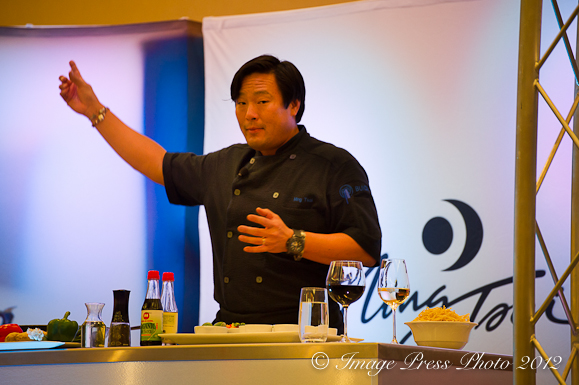 One of the things that I love about interviewing chefs is that each seems to have their own unique passion.  Some are technical chefs and celebrate how the ingredients are prepared.  Others have a passion outside of the kitchen and see their newfound celebrity as a way to bring attention to a cause that they care deeply about. Still others have developed a special skill, like charcuterie or reviving heirloom ingredients that has brought them much recognition.

A few months ago, I was invited to meet Chef Ming Tsai while he was participating in the Food and Wine Buick Discovery Tour in Atlanta.  Ming, as he prefers to be called, has had a long and very successful career.  As I prepared for the interview, I wondered where the conversation would go since Ming has such a diverse and recognized background, beginning with his training alongside some of the world’s best chefs including Pierre Herme in Paris and sushi master Kobayashi in Osaka.  Since opening his restaurant, Blue Ginger in Wellesley, Massachusetts in 1998, he has achieved an impressive list of awards and accolades, written four cookbooks and hosted three television shows.  His awards include Best New Restaurant from the James Beard Foundation in 1998 and the honor of being the Foundations’ Best Chef Northeast in 2002.  His current TV show, Simply Ming, is nominated for a James Beard Broadcast Media award this year.  You can read more about Ming at this link. 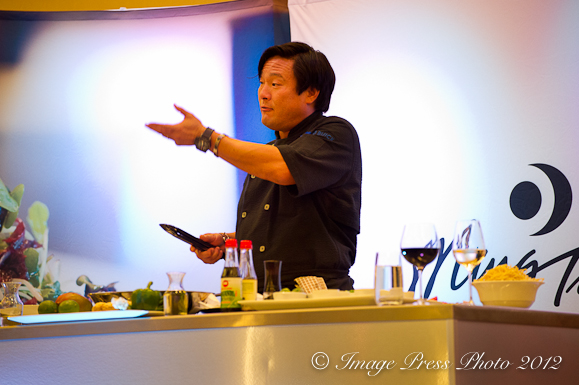 Cooking demonstration at the Buick Discovery Tour in Atlanta

Changing the way we view food, eating healthier and managing food allergies are all important issues to Ming.  When asked what his thoughts were on the next culinary buzz, it did not take him long to respond with “Food as medicine.  This concept has been in existence for thousands of years in China.  We are just discovering it here in this country and in other parts of the world.”

His most recent cookbook, Simply Ming – One Pot Meals, was developed for people who are interested in cooking more healthful foods at home with less fuss.  “People want to cook more and cook simply.  This is the trend we are seeing and will be helpful in fighting obesity and sickness.  Going to restaurants is still the complete dining experience and that will never stop, but cooking at home is a positive trend.  More good food, good health and good eating.”

Ming also mentioned the importance of certain foods in our diets, including Maitake Mushrooms, which are known as a super food in China.  In China they are considered to be an “immunity enhancer”.  High in antioxidants, important in maintaining a healthy heart, Maitake Mushrooms are also known to fight cancer.  Ming told us there was “something very cool coming down the pike”.  He now has a Maitake Ground Coffee Blend that is available on his website.  He firmly believes in the preventative and healing benefits of these mushrooms. 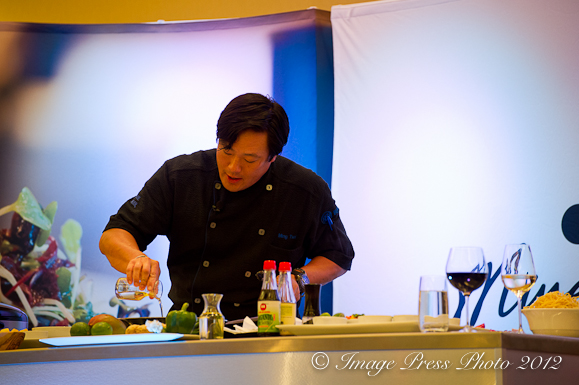 Involved in many philanthropic endeavors, one that is very important to Ming is the Chefs Move! to Schools initiative with Michelle Obama and other chefs throughout the country.  This program was created to tackle the problem of childhood obesity in our nation’s youth and to educate them about the importance of proper nutrition and exercise.  As he says, “We are making a dent, however, there are 6,000 chefs trying to cover 150,000 schools.”

“No one has the solution to this problem.  There is a lot of money involved with larger corporations.  When some of these companies subsidize lunches where chicken fingers and french fries cost $1.50, how can you compete with that?  We need to get more people cooking vegetables in schools and get rid of the soda machines.  There is no place for them in our schools.” 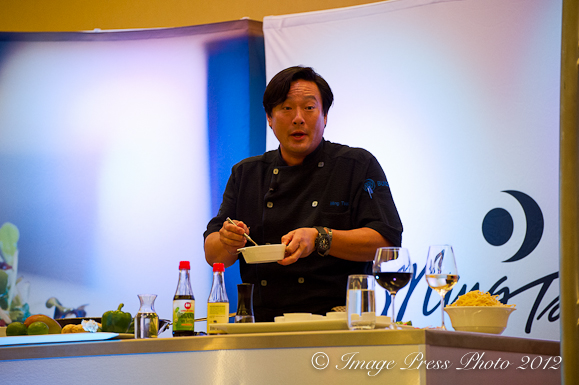 Ming has a great sense of humor

Page: 1 2
We participate in the Amazon Services LLC Associates Program, an affiliate advertising program designed to provide a means for us to earn fees by linking to Amazon.com and affiliated sites.
posted on April 13, 2012 in Chef Interviews, Main Dishes, Recipes, Soups and Salads
17 comments »

END_OF_DOCUMENT_TOKEN_TO_BE_REPLACED

17 comments on “Interview with Chef Ming Tsai of Blue Ginger – Wellesley, MA and a recipe for Three-Bean Chili”