If you travel as much as we do in this region, I would have to agree with Chef Crawford.  Many menus are very similar with slight variations on the same dishes.  Southern food has also been adopted by many other parts of the country as its popularity has increased and many of the Southern chefs have become nationally and even internationally recognized.  As Crawford said, “There are a few great chefs trying to preserve and return to the heritage of the South.  Preservation.  I can appreciate that, but what about progressing Southern cuisine?  I am interested in doing it and was doing it at The Georgian Room before pork belly took over the South.” 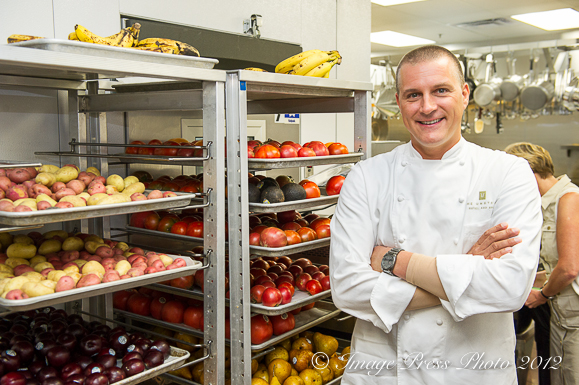 Chef Crawford supports local farmers as much as possible. In addition, the hotel has a one acre farm.

How does Chef Crawford want to make a difference?  “Refine Southern cuisine, which is not typically refined.  Progress the Southern flavors into something that is not one dimensional, which Southern flavors tend to be.  You tire the palate after a few courses, which you cannot do in fine dining when you have five or as many as seven to nine courses, which we did at The Georgian Room.

“Since I didn’t grow up in the South, I had to do something to get in the mindset.  I dove in to the culture by reading numerous books, not just about the food, but also the people and the culture of the South (some of these books were Fine Old Dixie Recipes, Mother Estelle’s Dessert Cookbook, and Grace Hartley’s Southern Cookbook).  Then I went to eat at all these great places in Savannah to see how I could refine the flavors.  We had a blast and were giddy referring to Southern cookbooks that were so old and amazing.  I don’t know how many people really got it, but I know one journalist did, John Kessler (Atlanta Journal Constitution) from Atlanta.  He came twice to see what we were doing.”

One of Chef Crawford’s “refined Southern dishes” was served at The James Beard Foundation’s Sunday Supper South two weekends ago in Atlanta, which we attended.  With the winds gusting and the temperatures plummeting in the wake of Hurricane Sandy, the participants at this outdoor event welcomed the red wine and soul satisfying dishes.  Crawford’s third course presentation of Smoked Beef Belly, Bread-and-Butter Roots, Hen-of-the-Woods Mushrooms, with a Pine-Vinegar Glaze was comforting on the chilly evening.  The meat was rich, flavorful and luscious with layers of flavor.  It was a huge hit, as evidenced by the accompanying Twitter stream.  And yes, it was “belly”, but it wasn’t pork belly. 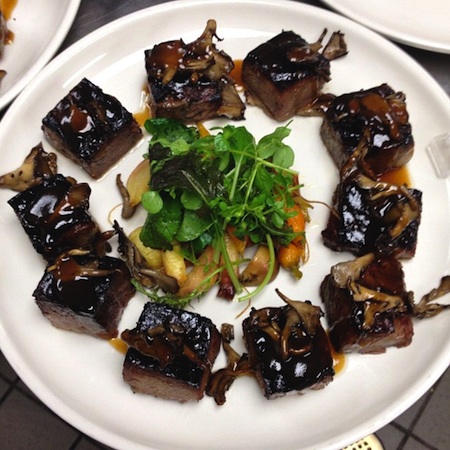 It was a pleasure to meet and spend time with Chef Crawford.  If you ever have the opportunity to travel to Cary, NC, you should make plans to dine at Herons.  It will be a special evening that you will not forget.

We look forward to seeing where Crawford’s “Refined Southern Cuisine” is headed.  You can be certain of one thing, the food will be extraordinary. 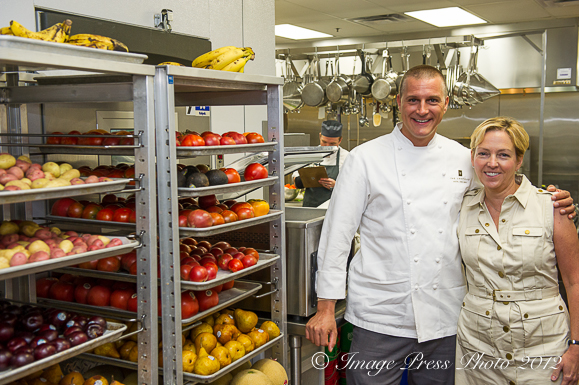 In the kitchen with Chef Crawford

Chef Crawford has shared his recipe for a gorgeous soup, Chestnut & Parsnip Soup, Butter Poached Lobster, and Pumpkin Seed Pesto.  The dish incorporates the earthiness of fall.  Each bite offered an additional dimension of flavor as the lobster and pesto are introduced.  The presentation of this soup is stunning and would be an elegant start to a special fall or holiday dinner. 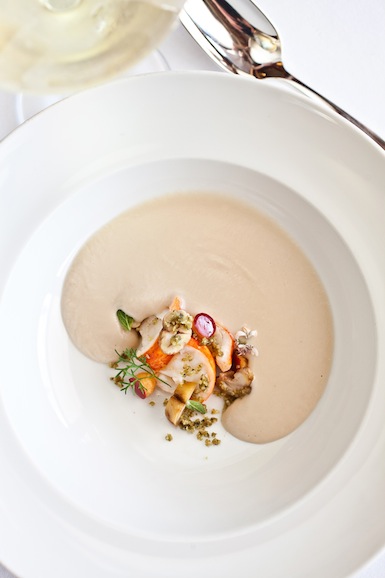 Originally from Pennsylvania, Scott Crawford is a formally trained chef and has worked at some of the most prestigious resorts in the South.  Over the years, he has garnered much culinary recognition earning a Mobil Travel Guide Five Stars for his regional American cooking as executive chef of Woodlands Resort & Inn (a Relais & Chateaux property) in Summerville, S.C.  Crawford’s coastal Georgian cuisine earned him five stars from Mobil Travel Guide and critical praise including Esquire magazine’s Best New Restaurant accolade as the executive chef of the Georgian Room at The Cloister Hotel in Sea Island, GA.

Moving to The Umstead Hotel and Spa and Herons restaurant in 2007, accolades have continued as the property was recipient of the prestigious Forbes Travel Guide Five-Star Rating and AAA Five Diamond Award.  Crawford has also been recognized by Food & Wine, Condé Nast Traveler, Travel + Leisure and Southern Living.  In addition, he was named a James Beard Foundation Best Chef Southeast semifinalist in 2008 and 2011.  He was also was honored to cook at the James Beard House in New York City with Herons’ chef de cuisine, Steven Devereaux Greene.

You may read my article about The Umstead Hotel and Spa and Herons here.

* Photo courtesy of The Umstead Hotel and Spa

Soup:
1. In a large pot add the parsnips, ten of the Chestnuts (reserve two for garnish), onion, milk, and enough water to cover (approximately 5-6 cups water). Bring to a boil.

2. Simmer over low heat until parsnips are tender and onions are soft and translucent (about 25-30 minutes). Add malted milk powder and dissolve, season with salt & pepper to taste. Puree mixture in a blender (add more water if needed) and pass through a fine sieve. Slice remaining Chestnuts for garnish.

Lobster:
1. In a small sauce pan heat 1 cup of water to boiling, lower heat and whisk in a small amount of the cold butter at a time until the butter is emulsified (not melted).

2. Submerge lobster into the butter until warm through. Remove and allow lobster to drain on a paper towel for a few seconds.

Pumpkin Seed Pesto:
1. In a food processor mill the Pumpkin Seeds, Sage leaves, Pumpkin Seed Oil and Brown Sugar. Season with salt to taste. (This should be dryer than traditional pesto).

Plate up:
1. In the center of a warm soup bowl place the lobster, Sliced Chestnuts and Pumpkin Seed Pesto. Pour the hot parsnip soup around. Sprinkle Vanilla Powder lightly.

We participate in the Amazon Services LLC Associates Program, an affiliate advertising program designed to provide a means for us to earn fees by linking to Amazon.com and affiliated sites.
posted on November 5, 2012 in Chef Interviews, Recipes, Soups and Salads
3 comments »