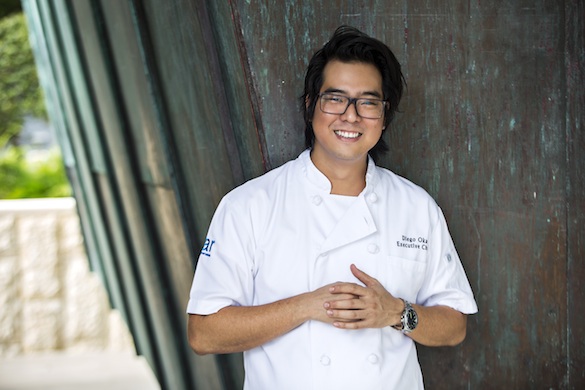 We recently had the pleasure of dining at one of Miami’s most talked about restaurants, La Mar by Gastón Acurio, at Mandarin Oriental, Miami. The next day we sat down to chat with Executive Chef Diego Oka, who we first met in Sarasota in December 2013 at a James Beard Celebrity Chef Tour Dinner. Here is Part I of this memorable experience – The Chef. 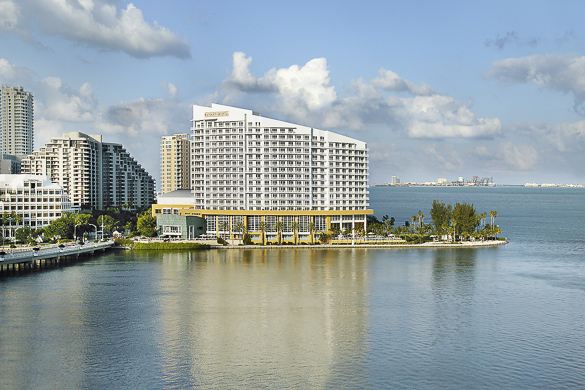 Miami is sizzling and it’s not just from the scorching hot summer temperatures. The dining scene is exploding with exciting new talent, restaurants, and International cuisine. If you haven’t heard of Diego Oka already (and you may have since he’s worked with world renowned Peruvian chef and restaurateur Gastón Acurio for 15 years), remember his name because you’ll be hearing much more about him in the future. 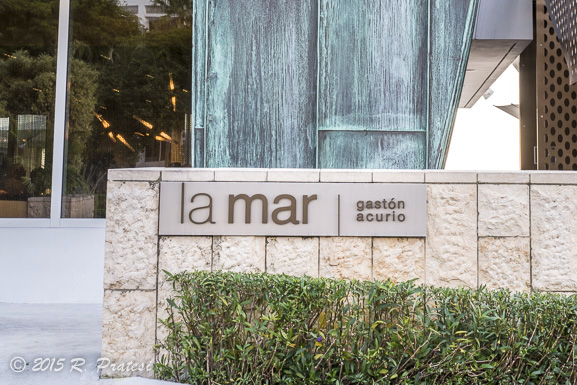 La Mar in Miami is Diego’s most recent restaurant opening for Gastón Acurio. This talented, dynamic, and engaging young chef, with quite a sense of humor and a very playful personality, started his long career with Acurio as an apprentice at Astrid y Gaston in Lima, Peru in 2000.  But don’t by fooled by his likeable demeanor.  His career is serious business.  This chef has opened seven restaurants with Acurio’s empire in locations around the world, including Lima, Mexico City, Bogota, Chicago, San Francisco, and now Miami.  He is a trusted advisor and has been called Acurio’s protégé. 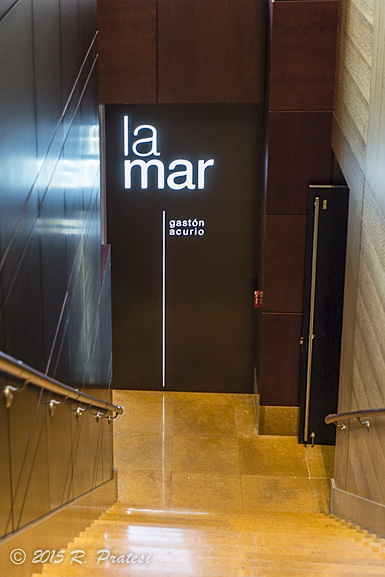 Entrance from inside the hotel

Since it’s opening eighteen months ago, Chef Oka and La Mar have received numerous accolades and press, including coverage in Food & Wine, Condé Nast Traveler, and Travel + Leisure. Zagat selected La Mar by Gastón Acurio as one of the hottest restaurant openings in the U.S. Thrillist named La Mar as one of the 21 Best New Restaurants in the U.S., and a cover feature in the Miami Herald’s “South Florida 50” called Diego an influential culinary innovator. 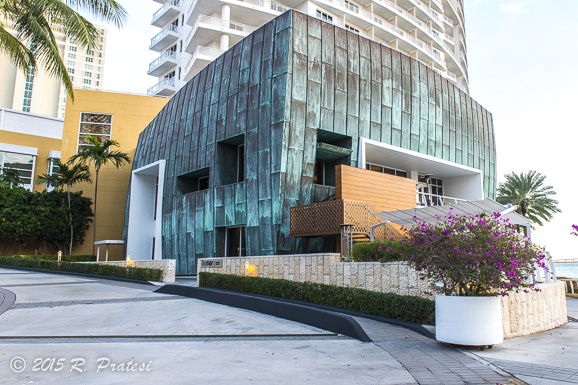 Exterior of the restaurant

Diego was born in Peru to Japanese parents who had immigrated to the country. His grandmother, who lived with them, owned a restaurant in Lima. Cooking some of the best Peruvian food he’s ever had, she was his biggest inspiration and reason to became a chef. His father, an abstract artist, had an impressive art collection, so as a young boy, Diego was surrounded and influenced by all the beauty that exists in both food and art. 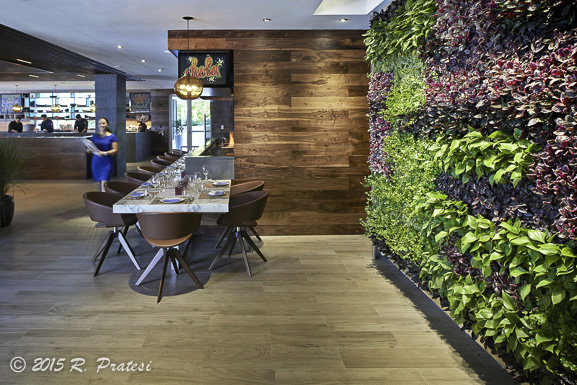 Choosing the path to attend culinary school was easy for him after being around delicious food his whole life. The other educational option that his traditional Japanese family might have preferred for their son, was to attend management school, but that’s not where his heart was. A graduate of the French culinary school, Universidad San Ignacio de Loyola in Lima, Diego spotted his culinary idol, Gastón Acurio, in a grocery store one day and approached him about an apprenticeship. Sensing his enthusiasm and passion for cooking, Acurio agreed to give him an opportunity at Astrid y Gaston. 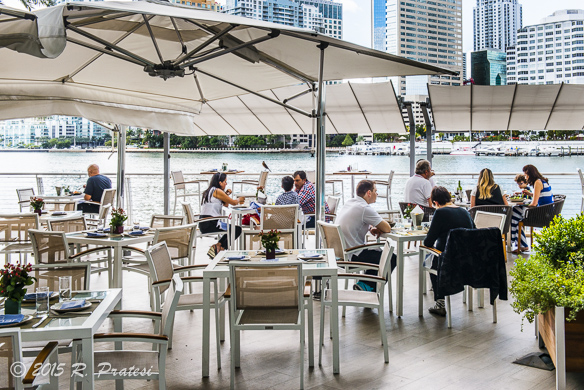 The food and the views are spectacular at La Mar

Following this experience, Diego then went on to work for well-known Master Sushi Chef Hiro Terada at Ichiban. He told us, “I went to a French culinary school and didn’t want to work in a Japanese restaurant, but my parents pushed me to learn our heritage and the art of preparing sushi and sashimi. I thought it was easy, but I didn’t know anything. It’s all about technique – how to buy the fish, how to store it and cut it. ” When he first approached Hiro about a job, Hiro asked him if he’d rather be a dishwasher or a waiter. “In Japan, you start from the bottom. He wanted me to suffer as he had suffered. I had everything easy in my life so far, so it was time for me to suffer.  I became a dishwasher.” 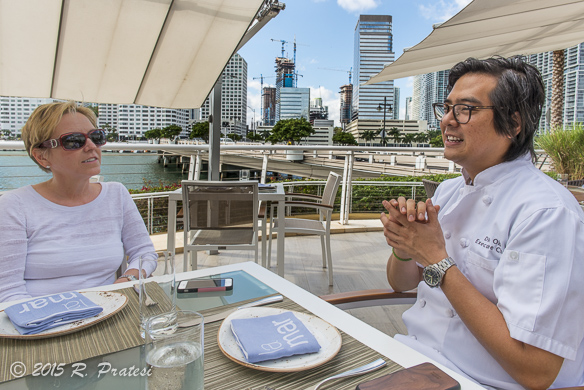 Chatting with Diego at La Mar

Diego went on to say, “I stayed with him for 3 years and eventually worked the sushi bar. I asked for a raise during that time, but never received one. In 2001 I was making $250 a month and that’s what I made the entire time I was there. I spent most of my money taking a taxi to work.  I was lucky to live at home with my parents. There’s not the same opportunity in Peru as there is in the U.S. There’s no hourly wage and you work 12-13 hours a day, 6 days a week.  As Hiro told me when I asked for a raise, ‘Don’t follow the money, the money has to follow you.’ Around the world, if you want to be a chef, you aren’t going to be a millionaire. You do it because you love it.” 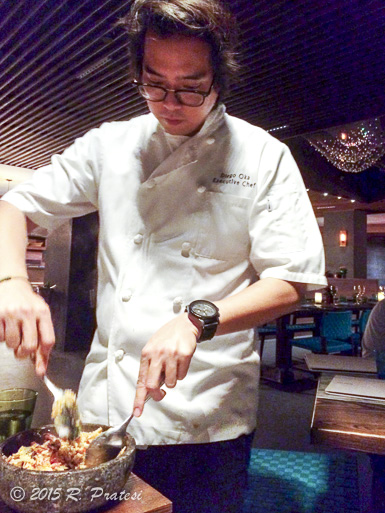 Preparing one of his specialties tableside, Chaufa Aeropuerto

Page: 1 2
We participate in the Amazon Services LLC Associates Program, an affiliate advertising program designed to provide a means for us to earn fees by linking to Amazon.com and affiliated sites.
posted on June 25, 2015 in Chef Interviews
0 comments »