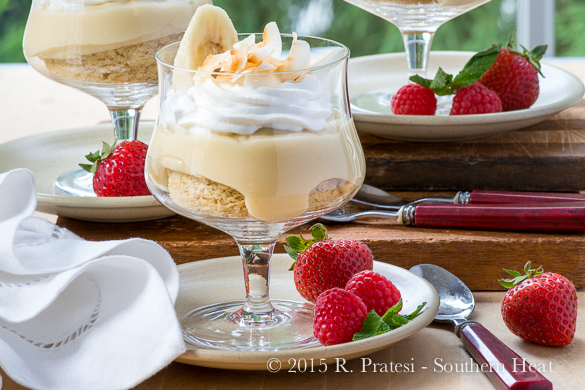 Many people have already received their copies of Southern Heat – New Southern Cooking, Latin Style and tomorrow you should be able to find the cookbook in stores near you! November 3rd to be exact! Of course, it’s also available on Amazon.com.  The response has been overwhelming for the book, so we’re very excited.  By the way, it makes the perfect Christmas gift! 🙂

This is our first book, which was a collaboration with Chef Anthony Lamas of Seviche, A Latin Restaurant in Louisville, Kentucky. As you probably know, many chef recipes are very daunting and sometimes the recipes don’t work as presented in the book as most chefs cook by experience and taste and not measuring cups and spoons. Our goal with Southern Heat was to create workable recipes for a home cook from the menu at Seviche along with family favorites and dishes that Anthony likes to prepare at home for his family.  We worked together in the restaurant kitchen and then I put in many hours of recipe development and testing at home to assure these recipes will work for the home cook. 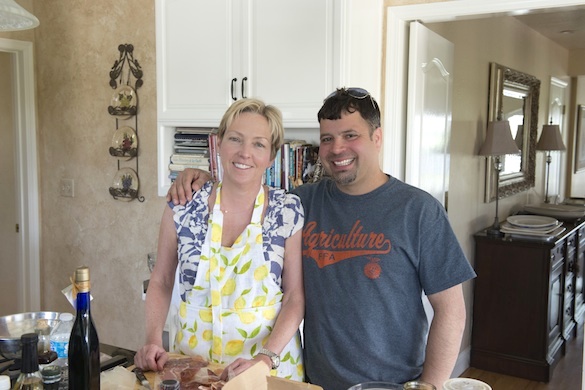 This is one of the first recipes to be published from the book and one of our favorites, Banana Rum Pudding with Toasted Coconut.

The pastry chef at Seviche, Steve Rappa, creates amazing desserts along with Anthony’s inspiration and flavors. Some of them are Steve’s old family recipes that he’s updated and tweaked. This dessert is really delicious and ideal for serving during the holidays when you have a houseful of guests. It’s an updated version of the old classic, Nilla Vanilla Banana Pudding with some of Anthony’s Latin inspiration of coconut and of course, rum.

This fancified version of banana pudding will please adults and children alike. There’s just enough rum to give it a unique and wonderful flavor, but not enough that the kiddos can’t enjoy it, too.

The photo from the book shows the recipe as it’s prepared at the restaurant, in individual servings, but for ease in preparation, you can prepare the dessert in a 13 x 9-inch pan (as the recipe directs) and cut into squares for serving. Just be sure to reserve the fresh slices of banana and toasted coconut pieces until you’re ready to plate the dessert. Follow the recipe directions for the best results for setting it up properly since this dessert is made with fresh ingredients and not boxed pudding mix.

If you do decide to serve the pudding in individual dishes (the headnotes tell you how), there will be leftover pudding and whipped cream, but that’s certainly not a problem. No one in your home is going to complain about having to eat a little extra homemade pudding made with rum and topped with sweetened whipped cream. 🙂

If you like this recipe, be sure to visit your local bookstore or order Southern Heat online at Amazon.com, so you can prepare more delicious recipes like this one in your home. 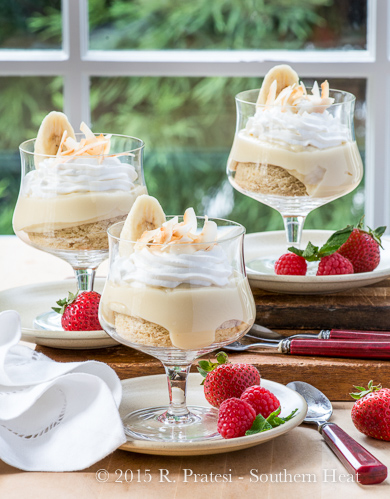 Serve this impressive dessert to guests during the holidays

While the recipe calls for making this dessert in a large pan, you can get fancy and prepare the dessert as we did for the photos. If you decide to do that, use an 8-inch square pan to bake the vanilla wafers. They will take a few extra minutes to bake since they are thicker. You will also have some pudding leftover, but no one in your family will complain about eating homemade pudding laced with spiced rum. Trust me on that. You will also use less whipped cream, but those leftovers are good, too.

When you make this as the recipe suggests, in a 13 x 9-inch pan, you can prepare it a day ahead. In fact, the flavors get better after they’ve spent some time together. Make the vanilla wafer crust and then once the pudding is cooked and chilled, top the crust with the pudding and refrigerate overnight. The next day and at least several hours before serving, prepare the whipped cream and spread it over the pudding layer. When you’re ready to serve to guests, top whipped cream with sliced bananas and sprinkle with toasted coconut pieces.

We participate in the Amazon Services LLC Associates Program, an affiliate advertising program designed to provide a means for us to earn fees by linking to Amazon.com and affiliated sites.
posted on November 2, 2015 in Desserts, Recipes
2 comments »