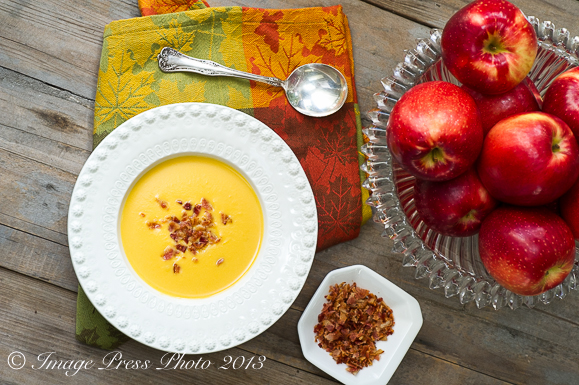 With mid-October upon us, fall is almost at its peak and the fresh fruits and vegetables at the market are representative of the change of seasons.  Apples are one of the very first fruits that begin to appear in the markets in late summer, announcing that autumn is just around the corner.  While there are over 7,500 known varieties of apples, most grocery stores carry a select few but, every once in a while a new apple appears on the grocery shelf.  One newer and unique variety of apple that you may have already noticed in your local grocery store this year is called a SweeTango.

The folks at SweeTango contacted me a few months ago asking if I’d be willing to help promote their relatively new to the market (available since 2009) apple locally in the Atlanta area.  I was not familiar with the variety and was curious to see what made it so different from other types.  It’s a cross between a Honeycrisp and Zetsar! and is available in the United States and Canada.  SweeTango apples are harvested for just two months between late summer and early fall, so if you’re going to try this apple you will need to do it soon.

After snacking on several of these apples and using them in recipes, I can say that they do have an unusual flavor that is refreshing.  The first bite yields a tartness akin to a green apple, like Granny Smith, that is followed by a sweetness and tanginess.  It’s true, layers of flavor in a single apple.  This makes it perfect to eat alone, pair with cheeses, or use in certain dishes.  It is particularly nice in a salad where you can combine the sweet and almost honey-like finish of this crisp apple with a peppery green (like arugula), perhaps paired with shaved fennel, some toasted walnuts, roasted beets, and a sherry vinaigrette.  Add your favorite blue cheese or a nice grated Parmesan-Reggiano and you have the perfect fall salad. 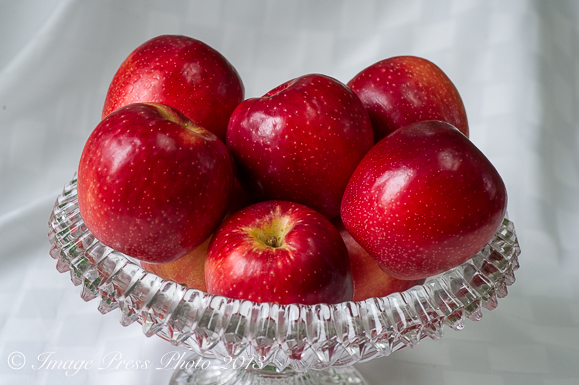 In addition to using these apples as I did in the above suggestions, I decided to make what I consider to be the most fall appropriate dish I could think of, a Sweet Potato and SweeTango Apple Soup. This recipe was created by Chefs Jon Shook and Vinny Dotolo of Animal Restaurant in Los Angeles.  By the way, you might be able to meet these two chefs in person in Los Angeles and enjoy this soup at their restaurant if you enter and win the SweeTango sweepstakes.  SweeTango is offering the winner of the contest an all-expense paid trip (airfare and hotel included) to dine at Animal in L.A. 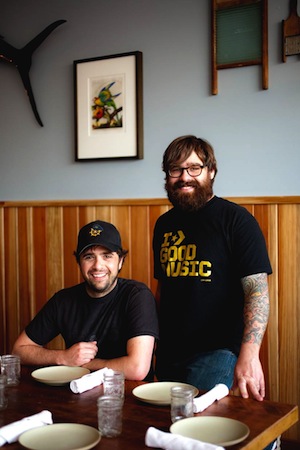 * Chefs Shook and Dotolo of Animal in L.A.

This delightful fall soup is open to all sorts of interpretations.  I made a few changes to the recipe to adjust it to our tastes and preferences.  I did not strain the pureed soup as I loved the velvety texture that I achieved using the blender and puréeing for a few minutes.  I also wanted to keep the thicker consistency since I was using half and half and not heavy cream.  The recipe as it was originally written is vegetarian, but next time I make it, I would consider using chicken stock for a more complex flavor.  I would also add some herbs while the veggies are cooking, such as fresh sage for an earthiness or a combination of cumin, ginger, and other Moroccan spices. 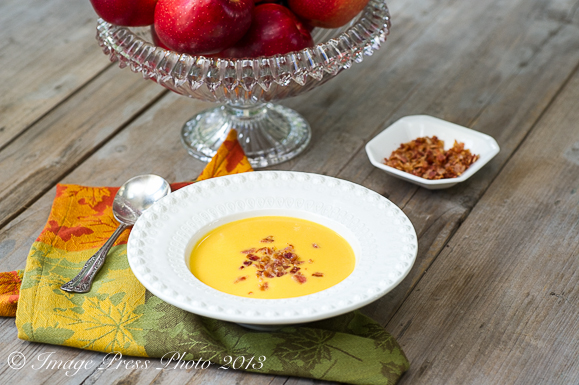 This soup combines the best of fall with sweet potatoes, butternut squash, and SweeTango apples

I added a bit of ginger and white pepper at the end to amp up the flavors and we thought the smokiness and salt of the bacon balanced the sweetness of the blend of SweeTango apple, butternut squash, and sweet potato.  I did not add any additional sweetener, such as maple syrup, as the recipe suggested, as I thought the soup was sweet enough.  A little sprinkle of Aleppo pepper at the end added a residual heat and another layer of flavor.  I can’t think of a better first course soup for a fall dinner party.  It definitely brings out the best of the season.

SweeTango apples are available now at most of your local markets in the Atlanta area including Whole Foods, Kroger, Fresh Market, Publix, Wal-Mart, and the DeKalb Farmer’s Market.  Be sure to head to your grocery store to pick up some of these apples because once they’re gone, you won’t find them again until next year.

I will be hosting a SweeTango giveaway in just a few days, so be sure to check back for more information about the SweeTango apple and to enter the giveaway. 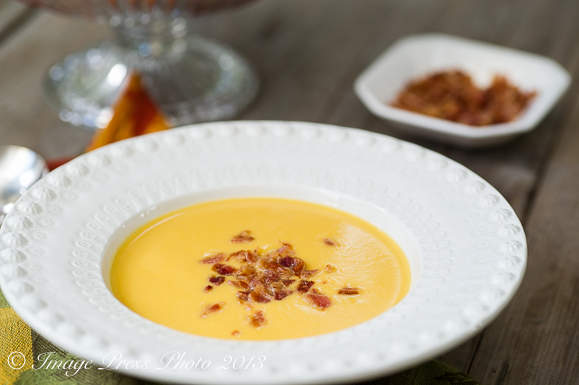 The perfect way to begin a fall dinner party

For some additional preparation ideas and flavors - A little diced celery would be nice to add to the other vegetables while sautéing them. I also like the idea of some fresh sage or Moroccan spices (cumin, ginger, etc.) added to the vegetable stock while the veggies simmer. You might also like to try substituting homemade chicken stock or your favorite Organic brand for another level of flavor in the soup.

1. Melt butter in a medium Dutch oven over medium heat. Add the onions, apple, butternut squash, and sweet potato. Sprinkle with a little Kosher salt and cook, stirring occasionally, until the onions are translucent and the vegetables are softened, about 8-10 minutes. Add the stock, bring to a boil, and then reduce to a simmer. Cover and cook for 30-40 minutes until the vegetables are very soft.

2. Purée the soup in batches until smooth and velvety and pour into a clean pan or Dutch Oven. Add the Half and Half, Kosher salt, ground ginger, and freshly ground white pepper. Warm soup over a low heat, stirring frequently, until the flavors have time to come together. Serve warm garnished with Espelette or Aleppo pepper and diced bacon, if desired.

Disclosure – I was contacted by SweeTango to help promote their brief apple season in the Atlanta area.  While this post was compensated, as always, the opinions expressed on this site are my own.

We participate in the Amazon Services LLC Associates Program, an affiliate advertising program designed to provide a means for us to earn fees by linking to Amazon.com and affiliated sites.
posted on October 11, 2013 in Recipes, Soups and Salads
5 comments »