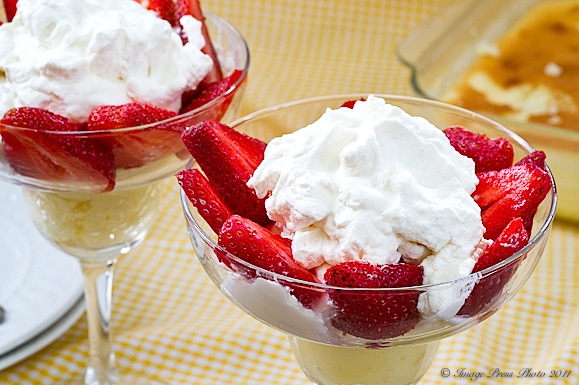 Do you know where your milk comes from?  Did you ever wonder why some milk tastes rich and others watery?  Why does some milk have a wonderfully pleasing taste while others have an off taste? Most milk is co-mingled and trucked in from several different states.  The milk comes from different types of cows with different feeding and processing.  We learned this and much more after visiting with Ginny and Jimmy Franks of Southern Swiss Dairy in Waynesboro, Georgia.

We first met the Franks family at the Georgia State Fair last year over a container of their chocolate milk. We went to see their beautiful Swiss Dairy cows and they offered us some of their milk which is bottled at their own processing plant at their farm.  This was unlike any other chocolate milk we had ever tasted. That rich, cold, velvety chocolate taste that lingered in our mouths…It brought back memories of my childhood and having Bassett’s Ice Cream from the Reading Terminal Market in Philadelphia.  That was the richest dairy product I had ever tasted until this milk! 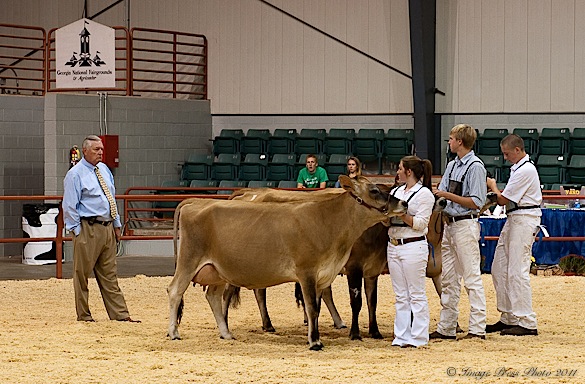 There were lots of cows at the fair 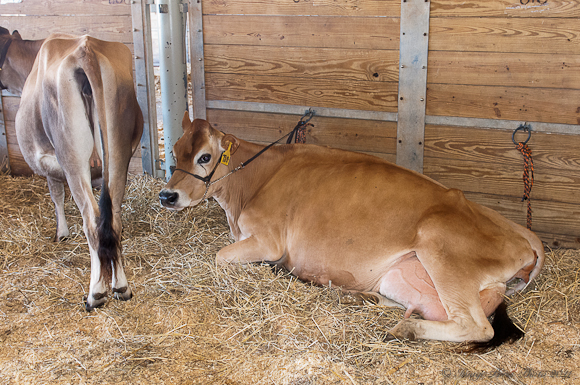 The Brown Swiss Dairy cattle are some of the prettiest cows

The quality of the milk produced by their cows and the higher fat content made this milk something special.  Of course, we knew this was going to be an On the Road adventure at first sip.  We just had to wait until this Spring to get to their farm!

Southern Swiss Dairy is a small family operation in southeast Georgia with 140 milking cows (the majority are Swiss Dairy cows).  They have 950 acres of land and grow supporting crops on much of their property including corn, barley, hay, rye grass and oats.  Ginny’s family has always been involved in dairy farming and after living in North Carolina and South Carolina over the years, managing some larger herds over that time, they moved to this property in 1987. 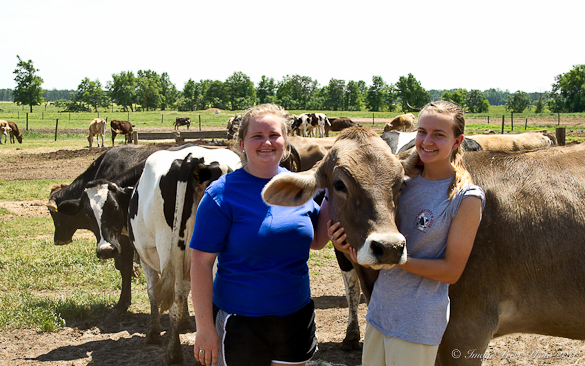 Whitney and Meredith work with their parents on the farm

There are six main breeds of dairy cattle (Holstein, Jersey, Guernsey, Brown Swiss, Milking Shorthorn and Ayrshire).  Most of the milk that we get at the grocery store is from a combination of these cattle, so you would never know how a particular cow’s milk would taste.  Swiss Dairy cows are very popular because their milk is highest in protein and fat.  These cows also have a wonderful temperament which impacts the flavor of milk.  Stressed cows are not happy cows and happy cows produce better milk. 🙂

Most whole milk that you purchase will be 3.25% fat.  The milk fat is 3.5% in the Southern Swiss Dairy whole milk.  If you have ever wondered why 2% milk varies so much in taste, it is because 2% milk can range (by law) between 1.1 – 2.5% fat.  At Southern Swiss Dairy, their 2% milk has exactly 2% fat.  Their milk is not homogenized, so you will find that you need to shake it well before drinking it or using it in cooking to mix the fat into the milk properly. 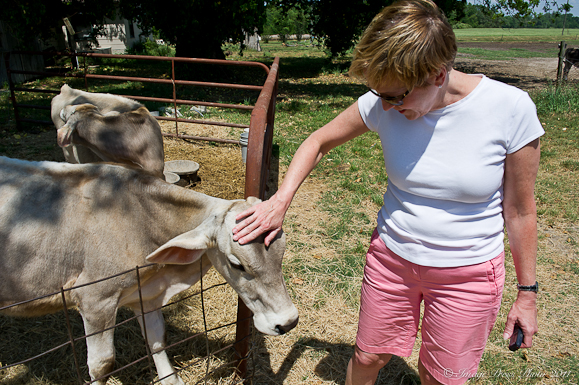 These girls are training to be shown 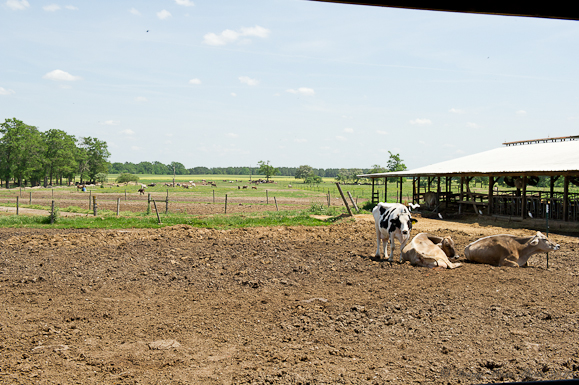 Their farm has a total of 950 acres

Brown Swiss cattle are known to be the oldest of all dairy breeds. They originated in the northeastern part of Switzerland. They tend to hold up better under heat so they produce more milk in hot climates.  Since they are not adversely affected by the warmer climates, they are able to eat more (therefore producing more milk).

They also do not seem to have the same breeding problems as some of the other breeds (like the Holsteins).  They  have good feet and udders and stay in the milking herd for more lactations than other dairy breeds.  These cows will grow to an average weight of 1600-1800 pounds and will live to be 10 to 11 years old.  They will generally breed or “calve” once a year. 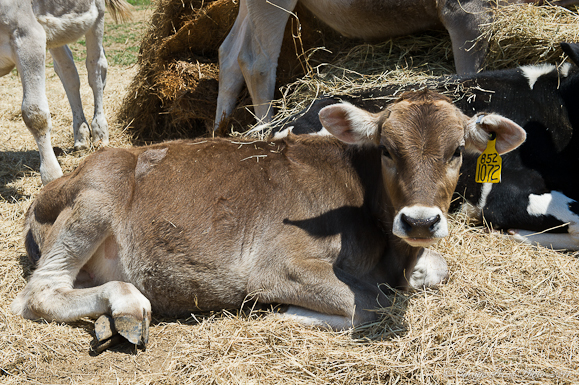 Brown Swiss cows are more tolerant of the heat and therefore, can produce more milk 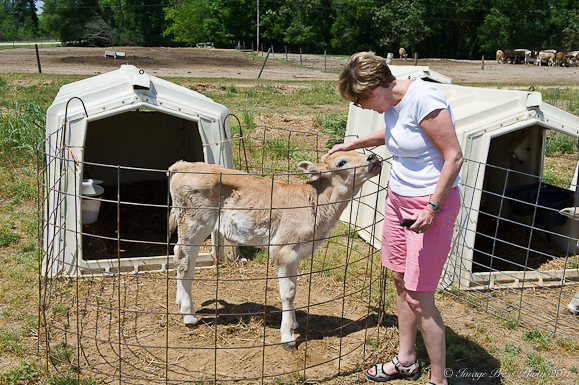 The Franks are involved in a dairy coop which is the way most small dairy farmers market and sell their milk.  Their cows will produce approximately 900 gallons of milk per day.  That means each cow is producing approximately 6 1/2 gallons per day.  Their cows are milked twice a day.  I’m thinking that’s a whole lotta chocolate milk…  and a lot of work!

Their coop is regulated by Federal and interstate regulations.  The regulations make it very difficult to make a profit from their milk.  The milk is co-mingled with other farmers’ milk and they have to truck their milk to Florida to sell it to the coop.  Jimmy told me that if the coop falls short on the milk that it needs to cover its customers, the shortfall is then divided amongst the coop members to cover the cost of trucking it in from somewhere else. 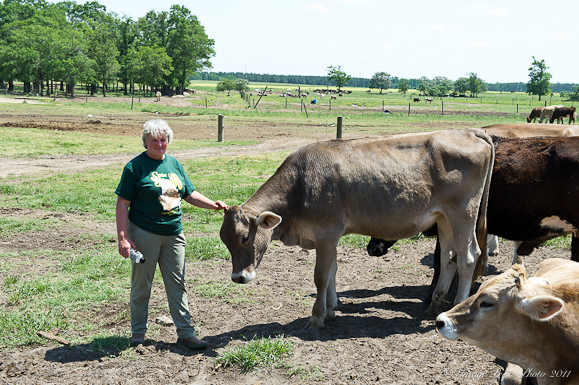 Ginny with Pecan who is The face of Southern Swiss Dairy 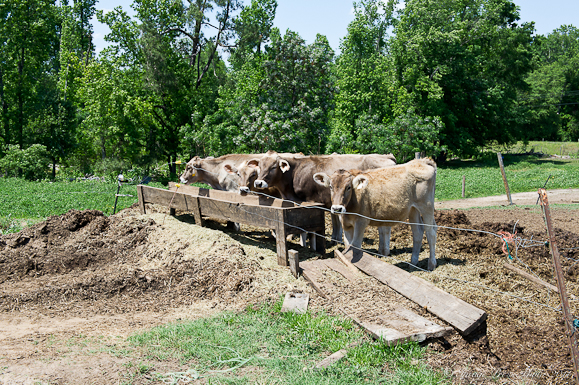 The Frank family recently decided to bottle and market their own milk and milk products as a way to make a profit on their own branded milk, in addition to working with the coop.   Although they are using their own milk (that has never left their dairy farm and has only traveled several feet to the processing plant) to make and bottle their own dairy products, they still have to sell their milk to the coop first and then buy it back.  Jimmy said that much of the time they are paying more for their own milk than what they can sell it for. 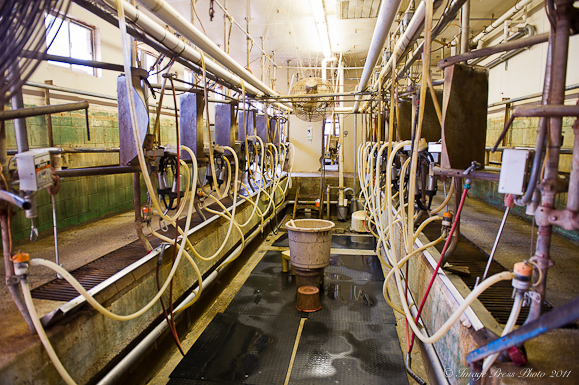 Page: 1 2
We participate in the Amazon Services LLC Associates Program, an affiliate advertising program designed to provide a means for us to earn fees by linking to Amazon.com and affiliated sites.
posted on June 2, 2011 in Desserts, Farms and Artisans, Recipes, Travel
13 comments »