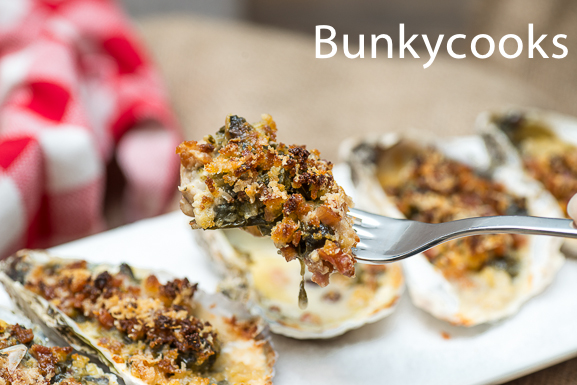 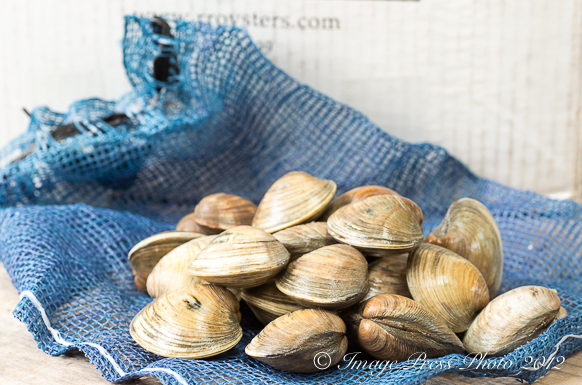 The Olde Salt Clams were an unexpected bonus

While we enjoy oysters and clams, they do not make regular appearances on our menus at home, so in anticipation of a few dozen oysters that were going to need serious shucking, we decided to purchase the shucker of all shuckers, the Mother Shucker.  This beautiful hand-forged oyster knife is designed by Carolina Shuckers, based in North Carolina.  As it turns out, I was supposed to receive an oyster knife with my shipment, but did not, so it was a good thing we had the Mother Shucker on hand when my cooler arrived. 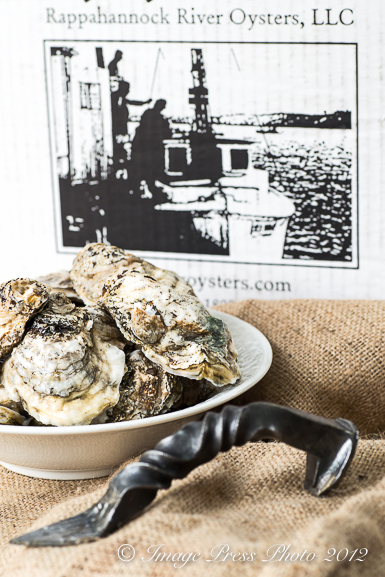 Thank goodness we had this Mother Shucker to shuck a few dozen oysters!

For this challenge, we were originally told that we would receive just oysters.  However, we learned just days before the cooler arrived that we would be receiving both the oysters and clams, so we could use one or the other or both in a recipe.  I chose to go with just the oysters and create a new Southern specialty, a “Southern Rockefella.”

Rappahannock River Oysters are plump and buttery with just a hint of brininess.  My inclination was to serve them raw, on the half shell, as we did with just a few of them.  After all, you need to taste the ingredients to make sure they are good. 😉 Pry them open, dress them up with a little mignonette or hot sauce, horseradish, and lemon juice and slurp them down; that’s it.  They do not need a lot of fuss to enjoy these jewels of perfection.  However, this is a recipe contest, so I have tried to stay true to the Southern origins of these Virginian oysters and have created a recipe that I believe does just that.

Oysters Rockefeller are very popular and many chefs make their own unique versions.  While we were in Louisville, Kentucky on our culinary tour last month, our guest chef, Anthony Lamas of Seviche, A Latin Restaurant, served us his spiced up version of oysters, Ostiones a La Lamas.  With a little heat and Manchego cheese, these gems gave me the confidence to do a little riff on the whole “Rockefeller” idea and go Southern. 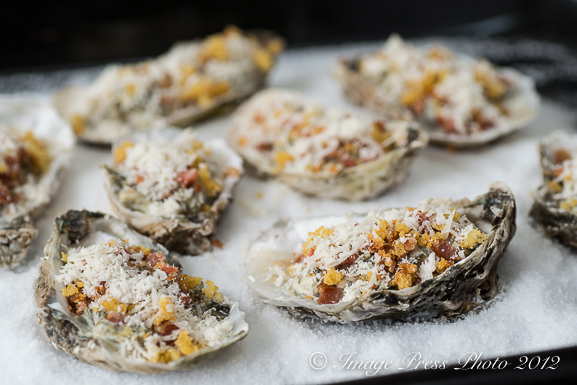 The makings of the Southern Rockefellas

Of course, going Southern required switching out the spinach for none other than collard greens.  Not just any collard greens, however, as most collards lack intricate flavors and have a heaviness that would not work well in the dish.  My favorite collard greens recipe is from Executive Chef Michelle Weaver at Charleston Grill in Charleston, SC.  She uses a bottle of Palmetto Amber beer, chicken stock, and some Texas Pete’s hot sauce to make this recipe really stand out.  The flavors are more refined than collards prepared in a more traditional way.  I used the smaller, local organic collards, since they are far more tender than regular collard greens.  Chef Weaver’s recipe calls for applewood smoked bacon, but how could I be true to the Southern heritage if I didn’t use bacon from the king of bacon, Allan Benton of Benton’s Smoky Mountain Country Hams?!   This bacon would elevate the “fellas” to a whole other level of flavor and complexity. 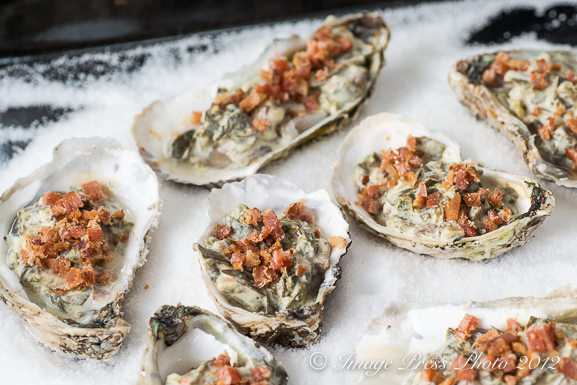 I ordered a few pounds of Benton’s bacon and it arrived several days later (once again, thank you, UPS man).  The smokiness of the bacon filled the entire house without opening the box.  While I have tasted Benton’s bacon countless times in restaurant dishes, I had personally never ordered from the king himself.  It was love at first whiff.  Benton’s bacon is thickly sliced and the texture is more similar to country ham than bacon when you cook it.  I knew it would add just the right amount of smoke and meaty crunch.

I used the Benton’s bacon to flavor the collard greens and the aroma was divine.  After hours of slow cooking, the collards became tender.  I thought that the potlikker would be a nice addition to the oysters, but after testing several versions of my Southern Fellas, we decided that it overwhelmed the flavor of the oyster.  I then thoroughly drained the collards, rough chopping them a bit finer.  I added a little cream to smooth the texture and moderate the flavor and a few splashes of Texas Pete’s hot sauce to kick up the heat for the final dish.  Of course, you can never have too much bacon, so I topped the collards with cooked and finely chopped Benton’s bacon. 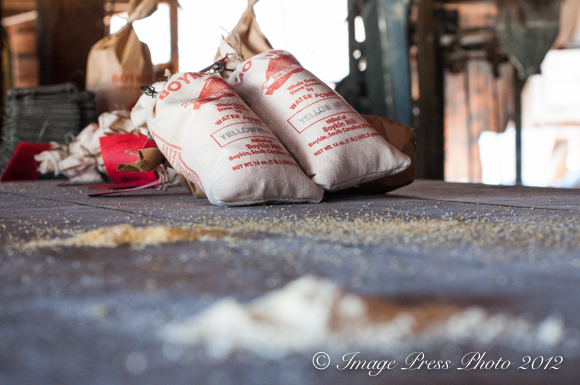 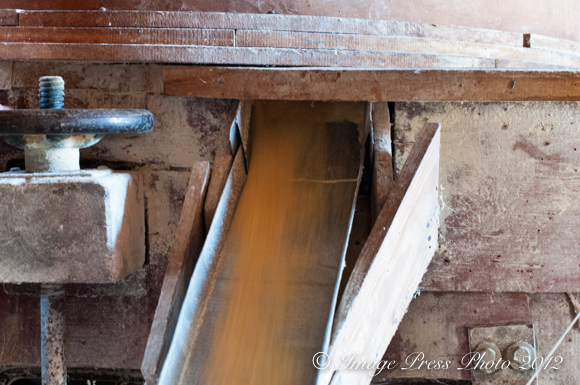 The next step was the final topping.  Traditionally, Oysters Rockefeller are topped with bread crumbs.  However, these are Southern Fellas, so what goes better with collards than cornbread? How could I not try the cornbread crumbs with the collards?!  Making a batch of buttermilk cornbread (a traditional Southern cornbread that is not sweet), I scooped the soft crumbs out of a couple of muffins and toasted them with a little butter until they were crispy to achieve a nice crunch.  The water-ground yellow cornmeal was from Boykin Mill in the very small town of Boykin, South Carolina.  We had visited the mill during our recent travels.  The battle of Boykin’s Mill is where the last Union officer was killed at the close of the civil war.  Nothing is too good for these “fellas”, so why not some freshly milled cornmeal for cornbread crumbs? 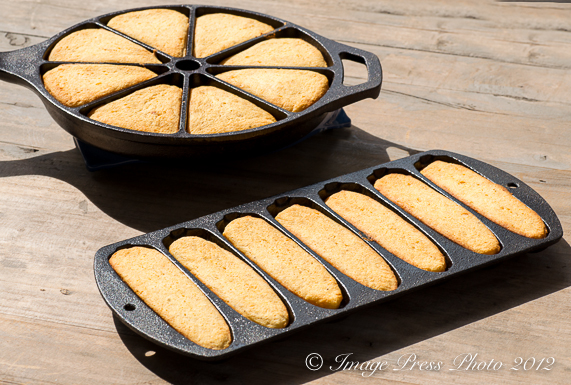 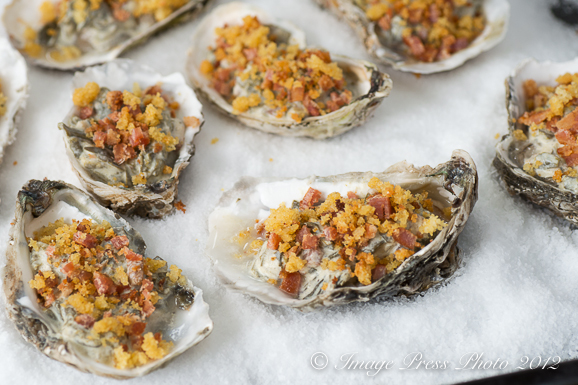 The next challenge was the cheese.  I tried several options of regional cheeses, but was not happy with the flavors.  I decided on freshly grated Parmigiano-Reggiano.  While I love creating recipes using local and regional ingredients, choosing the best ingredient is the most important consideration, and in this case, the Italians won. The finished oyster was perfection; the sweet creaminess of the collard mixture, combined with the smokiness of the bacon, buttery flavor of the oyster and saltiness of the cheese with just a bit of crunch from the cornbread.  Mother Shucker! 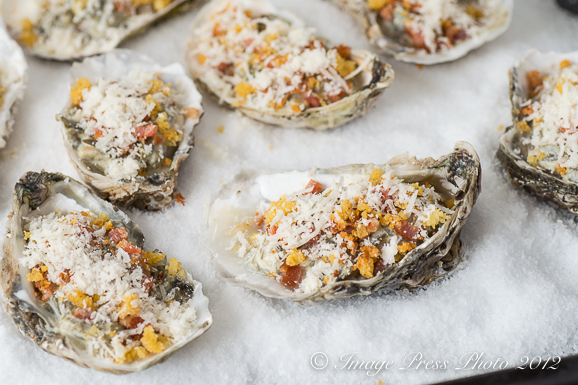 The clams were feeling a bit left out (not really), so after perfecting the Southern Rockefellas, we enjoyed them prepared in a traditional garlic, shallot, parsley, and white wine sauce.

I want to thank everyone for your vote in the first round of the contest with my Tennessee Whiskey and Sorghum Brined Leg of Lamb.  That recipe did win, so I appreciate your support.

If you like my Southern Rockefellas, I would appreciate your vote, once again, in the Lambs & Clams Cooking Contest.  You need to go to Facebook and first “Like” the Charleston Food and Wine Festival.  You will then be able to access the voting link to the Lambs & Clams Cooking Contest.  From that page, you can “Vote” using the vote button just below the banner on the right.  Voting will begin Friday, November 9, 2012.  Thank you!

Here are the other participants and their recipes:

Peter Barrett of A Cook Blog

Cecilia Stoute of One Vanilla Bean 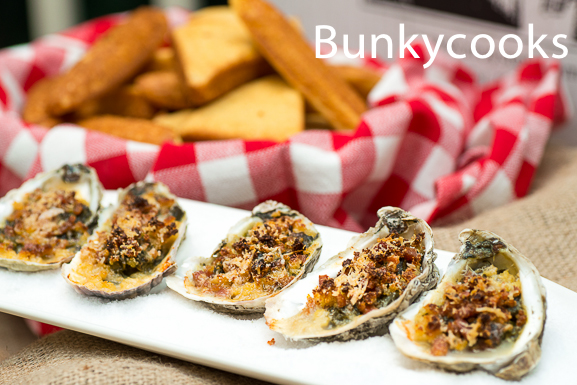 This Southern twist on traditional Oysters Rockefeller will make you a convert. Collard greens replace spinach and cornbread crumbs and are used to top the oysters. Benton's bacon adds a delightful smokiness to the finished dish. The collard greens recipe is from Executive Chef Michelle Weaver at Charleston Grill in Charleston, SC and is my favorite way to cook collards. They were perfect for creating this recipe. You can certainly substitute your favorite recipe for collards in the dish.

For the collards:
1. Heat the oil in a large stockpot over medium heat. Add garlic, onions and bacon. Sauté until onions are translucent. Add vinegar, Texas Pete, the stock and beer. Bring to a boil, and add the remaining ingredients.

2. Stir in the collards a few at a time (they will wilt, so you will have enough room to get them all into the pot). Bring to a boil and then reduce the heat and simmer for 1 1/2 to 2 hours or until tender.

2. In a small bowl, combine the cornbread crumbs with melted butter until evenly coated. Place the crumbs on an ungreased baking pan and bake for 10 to 15 minutes until lightly toasted, stirring once or twice. You want them crunchy, but not too brown, since they will brown later in the recipe. Remove from the pan and set aside.

3. Combine the collard greens with the heavy cream. Add a few dashes of Texas Pete's, to taste. Add more cream, if necessary, to achieve a nice, creamy consistency. Refrigerate the mixture until ready to use.

5. Take a metal baking pan (large enough for 12 oysters) and place Kosher salt over most of the bottom of the pan. Use just enough so your oysters can sit upright in the salt (this will ensure that they do not tip over while baking).

6. Take the oysters that have been cleaned and shucked and drain most of the liquid from the oyster. Place them in the bed of Kosher salt to assemble.

8. Place the pan in the oven and bake for 12 to 15 minutes. If the tops have not browned enough, place them under the broiler for just a few seconds until desired brownness is achieved and collard mixture is slightly bubbling. Serve immediately with a few additional splashes of Texas Pete's hot sauce, if desired.

We participate in the Amazon Services LLC Associates Program, an affiliate advertising program designed to provide a means for us to earn fees by linking to Amazon.com and affiliated sites.
posted on November 7, 2012 in Appetizers, Recipes
10 comments »