Sausage, Peppers and Onions with Saffron Rice and A trip to Salt-Lick Sausage and Stripling’s General Store in Warwick, GA 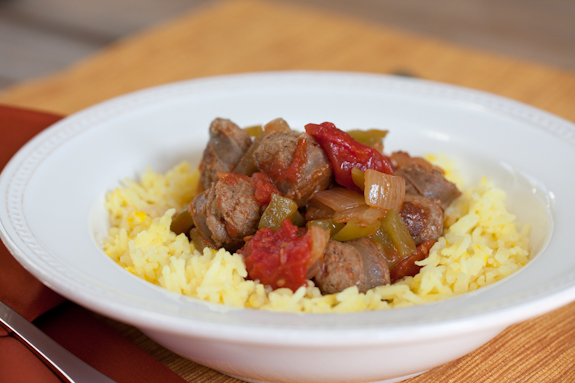 It has been awhile since the Bunkycooks have taken a road trip.  It was right before Christmas, to be exact. Between our miserable Winter weather this year and my surgery, it’s been nearly impossible to get out and about.  (I’m so bummed…I miss that big RV…not!). 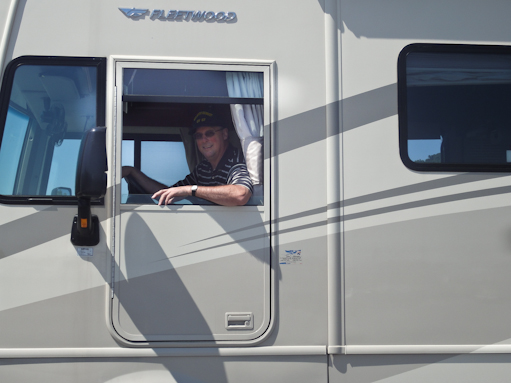 We have a love hate relationship with this vehicle...

Of course, knowing the worst was yet to come…I stashed a few of these road trips away back in the Fall, so I was prepared to entertain you in the dead of Winter (or at least I am making the attempt to do that…).

One of our last trips before snowpacolypse hit was to South Georgia. Remember the pecan groves? Well, unbeknownst to us (and probably to you, too), the little town of Warwick, Georgia is not only home to lots of pecans, it is also home to the dueling sausage makers! Who would have known? 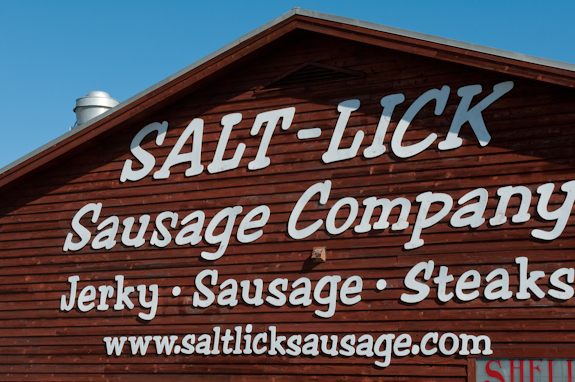 Salt-Lick Sausage Company is on one side of the road...

There are two pretty well-known  sausage makers right across the street from each other on Highway 300 South. One is Salt-Lick Sausage Company and the other company is Stripling’s General Store. Both of these businesses have very cute stores with all sorts of interesting Southern food stuffs, in addition to their soon to be internationally famous sausage!

The sign outside of Stripling’s says “You never sausage a place.” OMG! I feel like I am on an episode of Jay Leno! 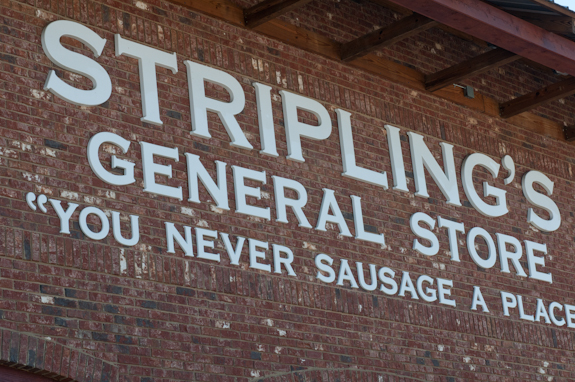 Stripling's is on the other side of the road!

Anyway…for those of you that need or want to to know more…Warwick is also the “Grits Capital of the World” and home to the National Grits Festival every Spring. Don’t you just love finding out this sort of nifty information?  Now, St. George, South Carolina also says they are the “Grits Capital of the World” and that is on Oprah.com.  (Grits fight!)  I am for sure staying out of that one! 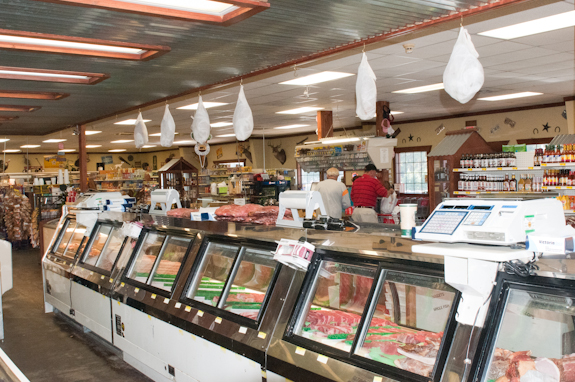 Just so you know, if you are interested in finding these businesses, you might also locate them in Cordele, Georgia (although the sign says Warwick). Don’t ask me, I’m just reporting it as I see it! 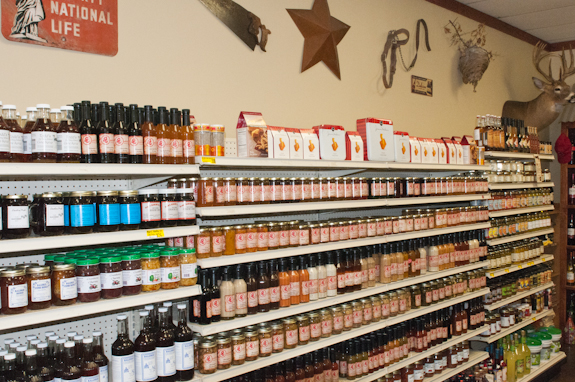 They have a large selection of specialty condiments and local foods. 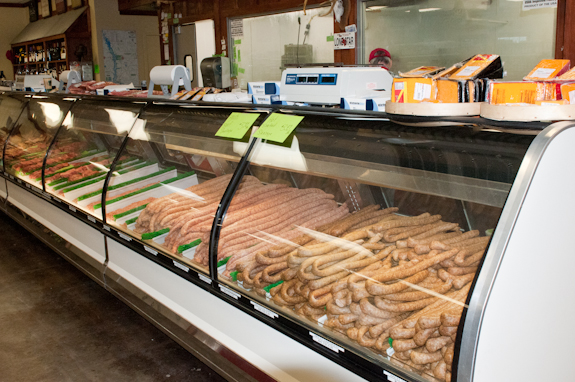 However, they are known for their homemade sausage!

We decided to try sausage (and LOTS of it!) from both Salt-Lick and Stripling’s. You’ve gotta get some of the local goods while you are there!  So, we brought home pounds and pounds of sausage. Who is going to eat all of this stuff? 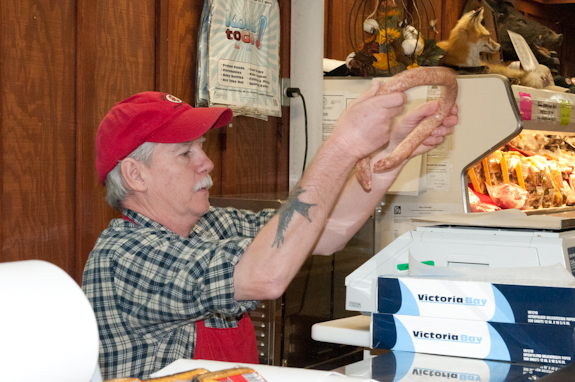 Tony fixed us up with plenty of sausage! 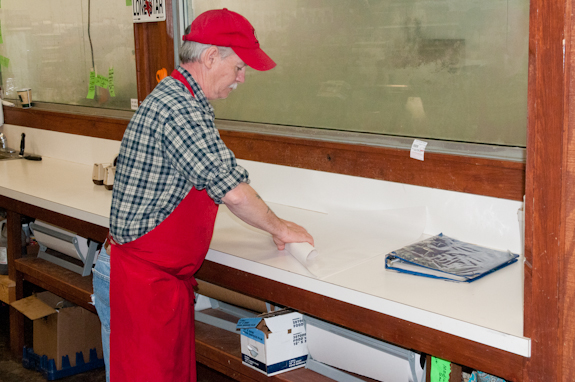 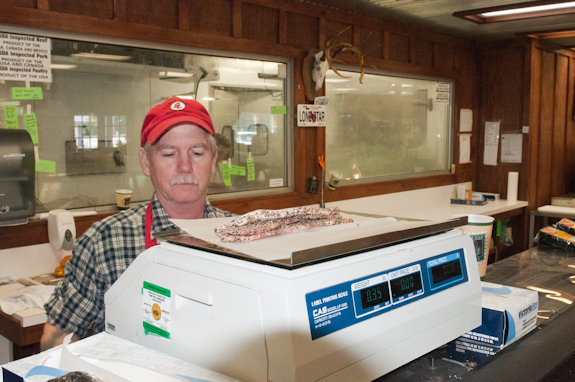 We even brought home some of Salt-Lick's homemade bacon!

We purchased the same varieties from both sausage makers so that we could do our own taste tests at home. This included both the fresh sausage as well as the smoked sausage in mild and medium. We also tried their spicy new Jalapeño Cheddar flavor in both the fresh and smoked versions! Let me just tell you, that taste testing stuff is one calorie laden experience!

So, after eating much sausage, we decided that the winner of our taste testing was…the medium fresh sausage from Stripling’s and the fresh Jalapeño Cheddar from Salt-Lick!

We found quite a difference in the flavors, seasonings and fat content in these sausages, so sausages are definitely not the same between butchers.  It is good to know that when you are making a dish with sausage.  The taste will vary greatly depending on the sausage you purchase.

In the end, we declared it a tie (I suppose). They were all good, but really…how much sausage can one eat??? 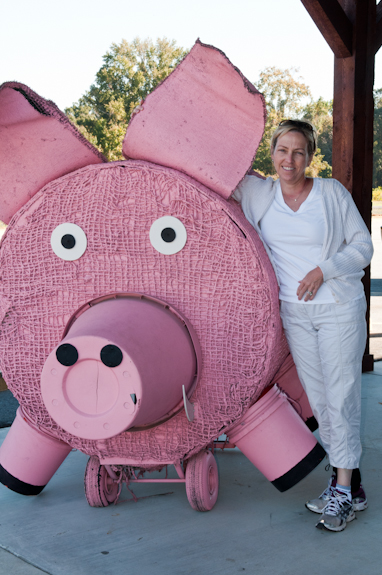 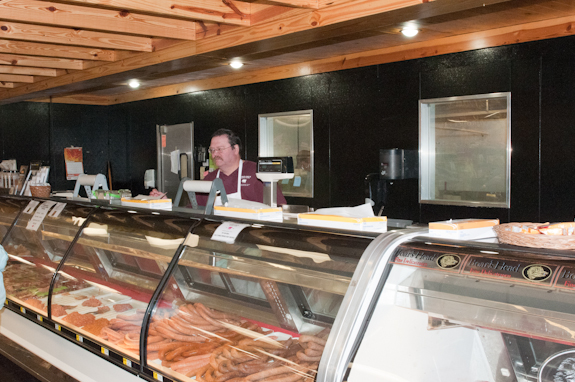 Stripling's has lots and lots of sausage, too!

I liked the medium fresh sausage so much from Stripling’s, that I made a really quick and delicious recipe with it. This recipe’s flavors come from the spices in the sausage, so you do not need to add much to the dish. 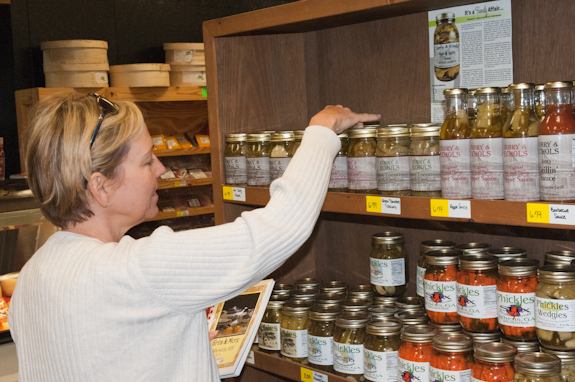 If you want to try this particular sausage from Stripling’s, you can order from them.  However, if you have a local butcher who sells fresh sausage, you might might want to try their medium version.  Stripling’s sausage was well-seasoned with spices and a bit of heat, so be sure to ask for something similar.

You can also order the Jalapeño Cheddar sausage from Salt-Lick at their online store if you would like to give that a try as well. 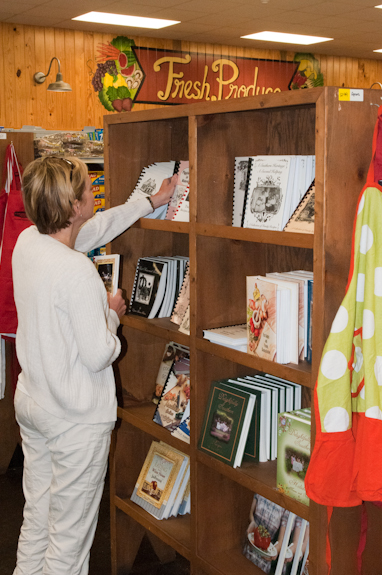 Stripling's has a wide variety of local and regional cookbooks. 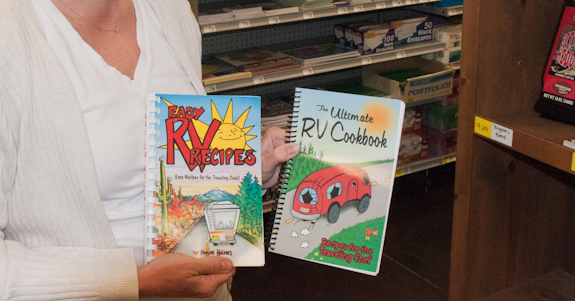 They even have cookbooks for folks like us who are traveling in our RV!

Be sure to visit these very fun general stores and sausage makers when you are in the South Georgia area. This is a classic example of some real local and Southern traditions!

As always, when Mr. Bunkycooks gives it a thumbs up more than once, we are good to go with a recipe.  This one was a particular favorite of both of ours. 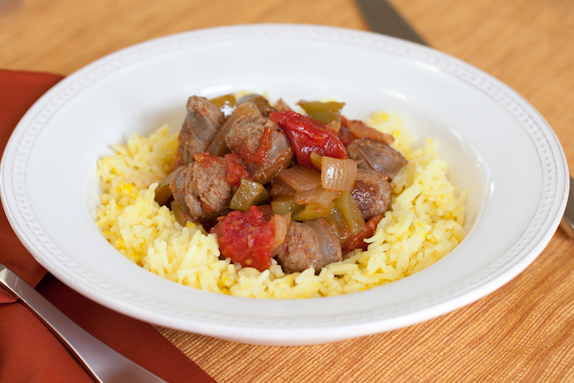 Be sure to try the this dish with your favorite local and fresh sausage!

1. Rinse the rice well and drain. In a medium sized saucepan, add the rice, chicken broth, salt and saffron.

2. Bring to a boil. Cover, and reduce heat. Simmer for fifteen to twenty minutes until stock is absorbed and rice is tender. Fluff with a fork. Set aside.

To prepare the sausage:

1. Heat olive oil in a medium saucepan over medium-high heat. When the oil is barely smoking, add the sausage slices and brown on both sides. This should take between two to three minutes per side. Remove the sausage from the pan and set aside.

2. There should be enough fat in the pan, but if there isn't, add a little more olive oil. Reduce heat to medium, then, add the onions and peppers. Cook the vegetables until they are tender, stirring occasionally, about eight minutes.

3. Add the can of stewed tomatoes to the pan. Add back in the sausage. Bring to a boil and simmer, covered on a very low heat for ten minutes. You want to give the flavors a chance to come together.

4. Serve immediately over the saffron rice. You will have extra rice leftover from the above recipe.

We participate in the Amazon Services LLC Associates Program, an affiliate advertising program designed to provide a means for us to earn fees by linking to Amazon.com and affiliated sites.
posted on January 24, 2011 in Main Dishes, Recipes, The South, Travel
16 comments »

END_OF_DOCUMENT_TOKEN_TO_BE_REPLACED

16 comments on “Sausage, Peppers and Onions with Saffron Rice and A trip to Salt-Lick Sausage and Stripling’s General Store in Warwick, GA”