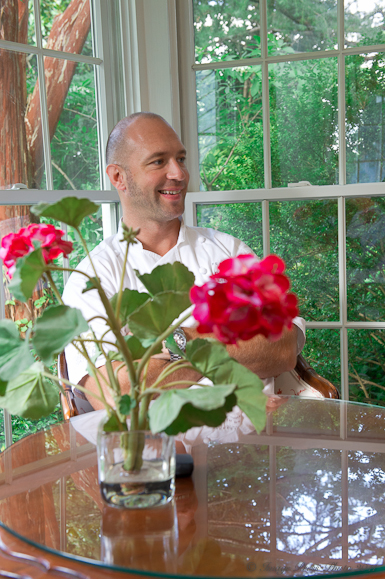 Fearrington House Inn in Pittsboro, North Carolina is an enchanting and very special place just minutes from Chapel Hill.  This Relais & Chateux property offers the perfect mix of relaxation, elegance and gourmet food, thanks in part to their Executive Chef, Colin Bedford.  We were excited to be able to sit down following our Culinary Class in August to learn more about his background, philosophy on cooking and techniques that he uses in the kitchen.

Reared in England and trained in culinary school in the United Kingdom, Chef Bedford’s background is a little different from the other chefs we have met and interviewed.  After culinary school, Bedford apprenticed at The Castle Hotel in the UK, which is very much like Fearrington in that it is a small luxury property owned and run by one family.  Its restaurant has one Michelin star and is known as a training ground for up and coming chefs.  From there, Chef Bedford traveled to work in Ontario, Canada at The Prince of Wales Hotel where he quickly was promoted to Executive Sous Chef.  He then came to Fearrington House Inn in 2005 and by 2009 had earned the position of Executive Chef. 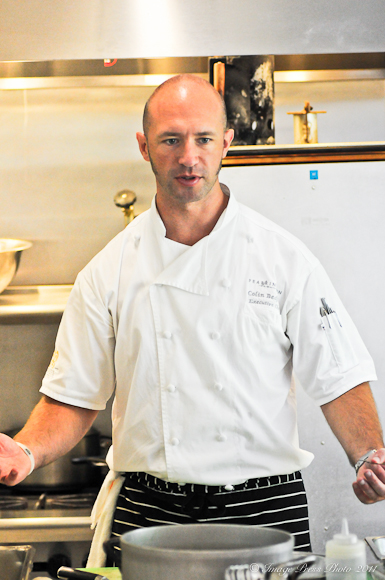 Chef Bedford in the kitchen at Fearrington House Inn

We thoroughly enjoyed Chef Bedford’s creative menus and exceptional flavors during our stay at Fearrington House Inn.  When we dine out, we look for chefs that use local ingredients and create layers of flavor through their culinary techniques.  This is exactly what Chef Bedford does at Fearrington House Inn.  In fact, Fearrington House has received many awards and accolades, including the Top Ten hotels for food in North America by Condé Nast Traveler: Gold List 2011, No. 2 Best Small Hotel in the U.S. by Condé Nast Traveler and a Gold Medalist restaurant in 2011 (News & Observer).

A firm believer in using local ingredients and supporting smaller farmers whenever possible, Chef Bedford buys the best ingredients he can find.  He also prepares only non-endangered and sustainable seafood in his kitchen.  This chef is concerned that when the new Farm Bill is implemented next year it could definitely cause a shift in what he can purchase and where it will come from.

In the Farm Bill, chefs and farmers will be required to provide extensive information about the foods they produce and use.  The new regulations will be much stricter and will place a higher burden on the small producers as they lack many of the tracking systems that will be required.    The Farm Bill will favor corporate farmers with extensive systems and economies of scale. 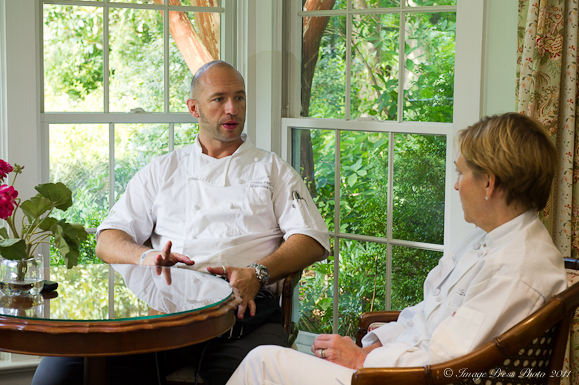 In the Garden House

Bedford believes the bill will also negatively impact smaller suppliers of fish and seafood.  “Small guys will get swallowed up (pardon the pun) by larger fleets that have all the high tech equipment.  Everything will become so streamlined.  Knowledge and skills that have been handed down through generations will get lost with the big companies.”

He hopes that there will be some grandfather clause that will protect some of his suppliers and that health inspectors will not be so harsh.  As he said, all it will take is one incident where someone falls ill and they can’t trace it back to the specific supplier and there will be a major backlash. 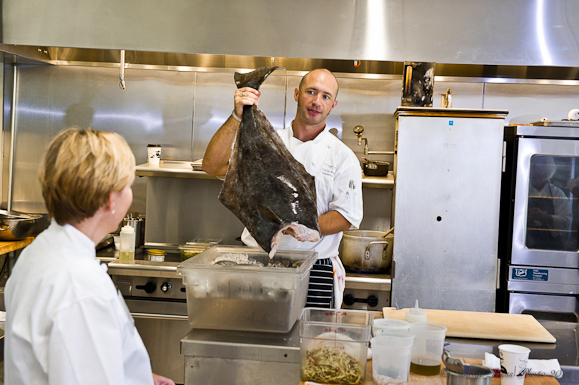 We learned how to properly fillet this halibut

Bedford feels that the “Farm to Table” philosophy is reaching a saturation point.  He thinks there will be a new culinary trend that is far more eclectic and possibly driven by dietary preferences and restrictions.  Guests will sometimes arrive at Fearrington House with a list of fifteen ingredients that they cannot eat.  He said that while it is difficult, he is in the business of customer service and has to facilitate these requests.

The question is – is this just a dislike or a true allergy?  People will claim they are lactose intolerant and he will prepare dishes based on that restriction, but then they will eat Panna Cotta for dessert.  I couldn’t help but laugh when he said, “I want a pharmacist on staff.  Here is a pill.  Eat your dinner.”  I don’t know how you accommodate all of these restrictions on a much larger scale (like a wedding reception) and still make everyone happy.  Restaurants catering to all of these dietary needs, restrictions or requests may be the next big trend as more people seem to be gluten or lactose intolerant, want to avoid certain foods or are allergic to certain ingredients. 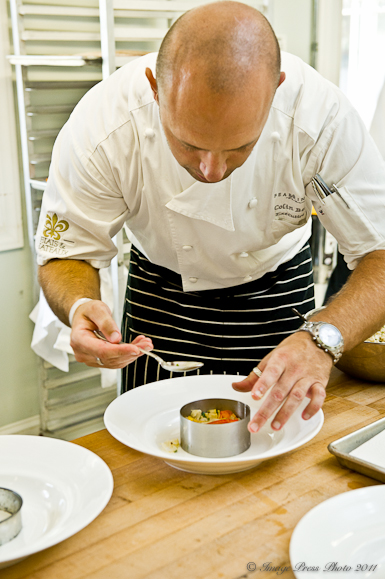 Plating food to look beautiful is a real art