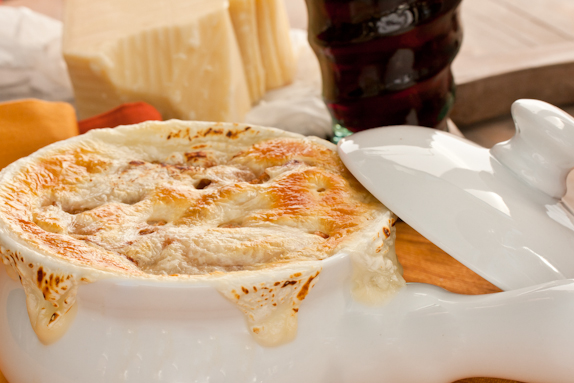 Ho ho ho!  If you are counting, it is only eight days until Christmas!

I have been struggling with the holiday planning and cooking this year after having this ankle surgery.  I certainly have not been cooking as much as I normally would this time of year and thank goodness for a stockpile of blog posts, otherwise, you would not be reading many of these either!

One soup that I return to year after year during the holiday season is French Onion Soup.  Several of the recipes that I have tried require much stirring to caramelize the onions (sort of like stirring to make a perfect risotto) and since I already hurt too much after last week when I prepared that dish, I needed a recipe that didn’t require hours of being on my feet.  (Isn’t it funny how far you will push yourself go for a fabulous meal and a great glass of wine?) 😉 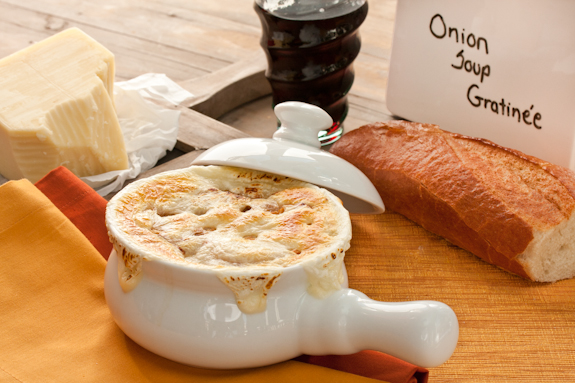 I adore this soup!

This soup does take several hours to prepare and some stirring (you don’t get off that easy), but much of the work is done for you in the oven!  That is great help to any busy or incapacitated cook, especially this time of year!  A good Dutch Oven (such as Le Creuset) works best for preparing this.  If you do not own one, maybe you can ask Santa to drop one off for you on his way to deliver all the kid’s toys!

The recipe is from Cooks Illustrated and what I have found with most of their recipes is that they can be somewhat tedious and may take some time, but you will be well rewarded when the dish is finished. 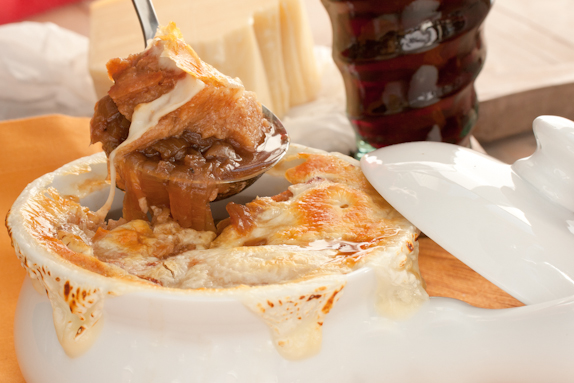 Don't skimp on the good French bread and Gruyère cheese!

Their motto is something like “they have tried a gazillion recipes so you don’t have to” and I am all about that some days, so I listen to what they have to say!  If at all possible, be sure to use the exact ingredients they specify.  I use Pacific Beef Broth and Swanson Organic Chicken Broth when I do not make homemade stock and I do think the flavors are the best.

You should also be sure to use a nice loaf of French bread for the crusty baguette slices, a good medium dry Sherry and Gruyère cheese.  It will elevate the flavors in the soup to a level of French Soup perfection!

I promise, one taste of this soup and you will be whisked away to a bistro in Paris and start singing La Vie En Rose.  Pour yourself a nice glass of wine and you might even forget about the stress of the holidays!

One suggestion, since the aroma of onions will stink up your house beyond belief! most definitely permeate your home during the cooking process, you might want to prepare this well in advance of the arrival of your guests.

The soup is best served two to three days after you make it, giving it time for the flavors to come together, so that should give your home some time to recover and smell just like gingerbread or potpourri (just as it should this time of year!). 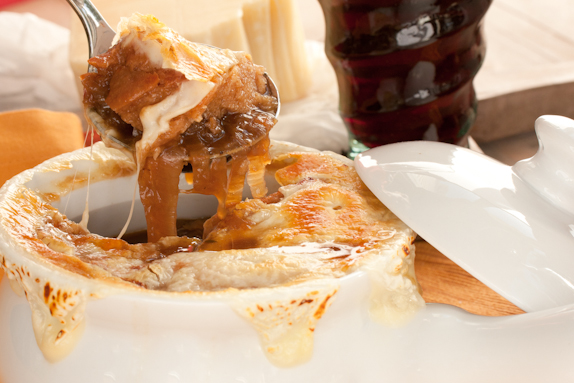 I suggest you start cooking these onions, put on some romantic French music, pour yourself that nice glass of wine and relax…for a few hours…while the oven begins to caramelize the onions! 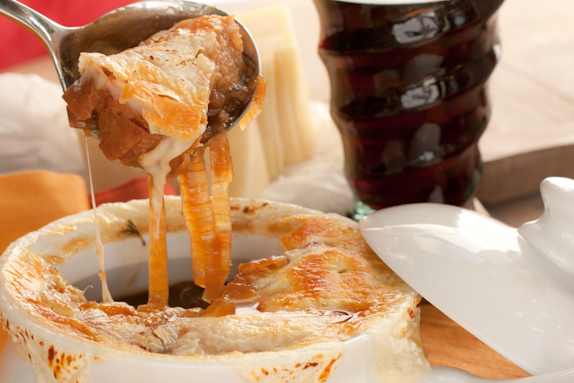 1. For the soup:
Adjust oven rack to lower-middle position and heat oven to 400 degrees. Generously spray inside of heavy-bottomed large (at least 7-quart) Dutch oven with nonstick cooking spray. Place butter in pot and add onions and 1 teaspoon salt. Cook, covered, 1 hour (onions will be moist and slightly reduced in volume). Remove pot from oven and stir onions, scraping bottom and sides of pot. Return pot to oven with lid slightly ajar and continue to cook until onions are very soft and golden brown, 1 1/2 to 1 3/4 hours longer, stirring onions and scraping bottom and sides of pot after 1 hour.

2. Carefully remove pot from oven and place over medium-high heat. Using oven mitts to handle pot, cook onions, stirring frequently and scraping bottom and sides of pot, until liquid evaporates and onions brown, 15 to 20 minutes, reducing heat to medium if onions are browning too quickly. Continue to cook, stirring frequently, until pot bottom is coated with dark crust, 6 to 8 minutes, adjusting heat as necessary. (Scrape any fond that collects on spoon back into onions.) Stir in 1/4 cup water, scraping pot bottom to loosen crust, and cook until water evaporates and pot bottom has formed another dark crust, 6 to 8 minutes. Repeat process of deglazing 2 or 3 more times, until onions are very dark brown. Stir in sherry and cook, stirring frequently, until sherry evaporates, about 5 minutes.

3. Stir in broths, 2 cups water, thyme, bay leaf, and 1/2 teaspoon salt, scraping up any final bits of browned crust on bottom and sides of pot. Increase heat to high and bring to simmer. Reduce heat to low, cover, and simmer 30 minutes. Remove and discard herbs, then season with salt and pepper.

4. For the croutons:
While soup simmers, arrange baguette slices in single layer on baking sheet and bake in 400-degree oven until bread is dry, crisp, and golden at edges, about 10 minutes. Set aside.

5. To serve: Adjust oven rack 6 inches from broiler element and heat broiler. Set individual broiler-safe crocks on baking sheet and fill each with about 1 3/4 cups soup. Top each bowl with 1 or 2 baguette slices (do not overlap slices) and sprinkle evenly with Gruyère. Broil until cheese is melted and bubbly around edges, 3 to 5 minutes. Let cool 5 minutes before serving.

* This soup is best served two to three days after preparing.

We participate in the Amazon Services LLC Associates Program, an affiliate advertising program designed to provide a means for us to earn fees by linking to Amazon.com and affiliated sites.
posted on December 17, 2010 in Recipes, Soups and Salads
17 comments »