Creole Jambalaya and a visit to New Orleans and Bourbon Street 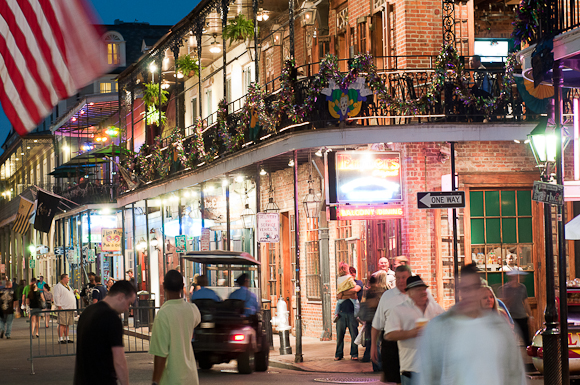 Happy Monday to you!  Last week I posted Part One of our farm visit to Crystal Pines Alpaca Farm and said that I would have Part Two for you this week. 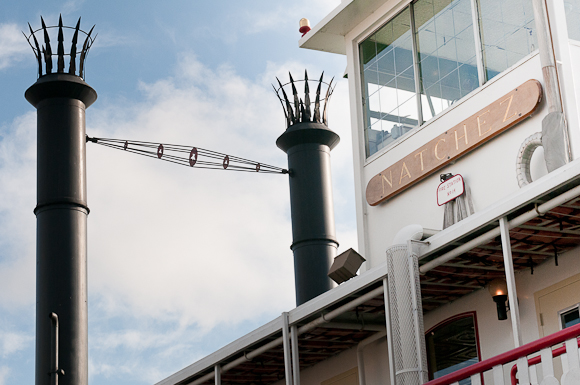 Walking along the Mississippi River

Well, I told you a story I am putting that on hold for a bit so that I can share some of our pictures from New Orleans with you today.  In fact, I will be doing a few posts on the Crescent City over the next few weeks.  I know some of you Mountain Mondays fans may be a bit upset, but I promise these pictures from Bourbon Street will have you smiling. 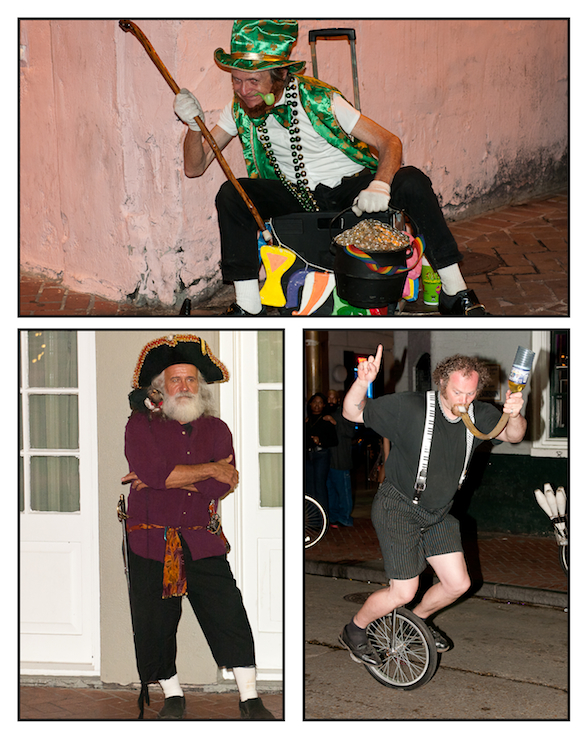 There are all sorts of characters and sights to see on Bourbon Street at night.

I had not been to New Orleans in many years, so when our friends John and Denise at Newf in My Soup asked us to meet them there for a visit, we were ready to go On the Road again!  We’ll do anything for some great seafood or a plate full of beignets and some Chicory Coffee…including driving seven hours one way! 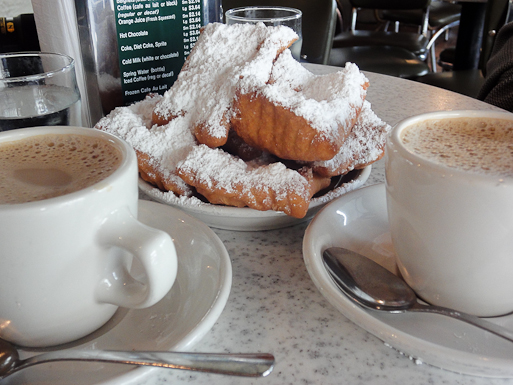 Beignets and Chicory Coffee at Cafe du Monde. You can’t eat just one!

I am sure glad that we did.  We had so much fun eating and drinking with John and Denise and eating and drinking some more all by ourselves.  I just love that city!  No other place serves up good food, booze and beignets quite like they do and there certainly is only one Bourbon Street!  Where else would you see a sign like this? 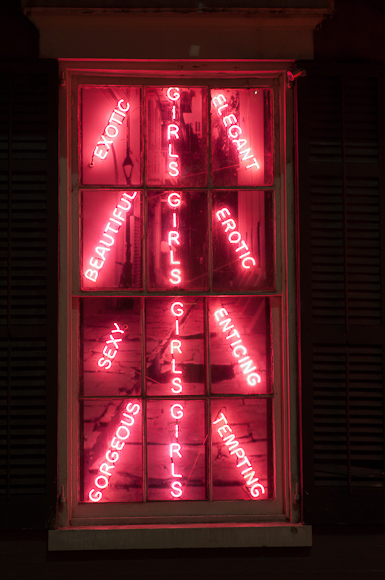 New Orleans is resilient and a city full of traditions, fabulous food and great people.  One of those traditions is Mardi Gras and we were lucky to have been there for the beginning of the festivities. 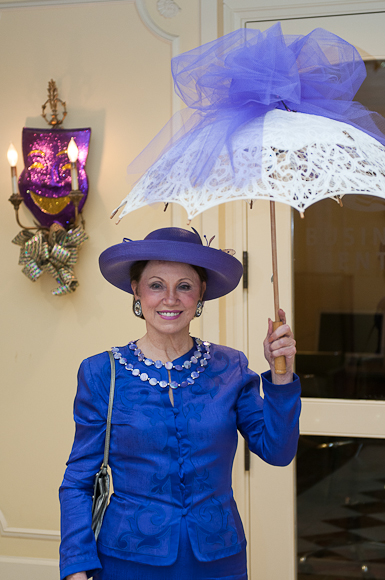 This woman is wearing the Mad Hatter dress for Mardi Gras.

I am feeling very much in the Mardi Gras spirit after seeing all the decorations.  I even brought home one pretty awesome set of beads! 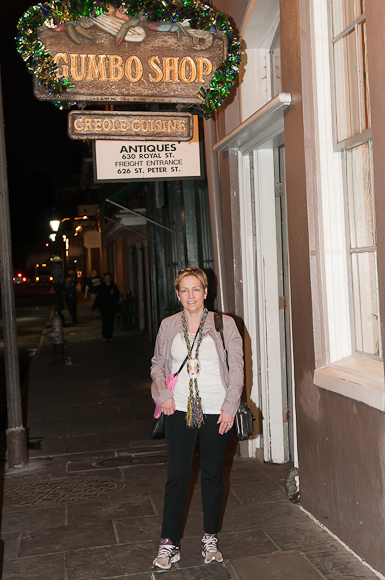 I love my major strand of Mardi Gras beads.

The people of New Orleans that we met were welcoming and incredibly warm.  They love their city and are doing everything they can to preserve it and their great history.  Then of course, there are guys like this that are friendly and talking even when no one else is in the bar! 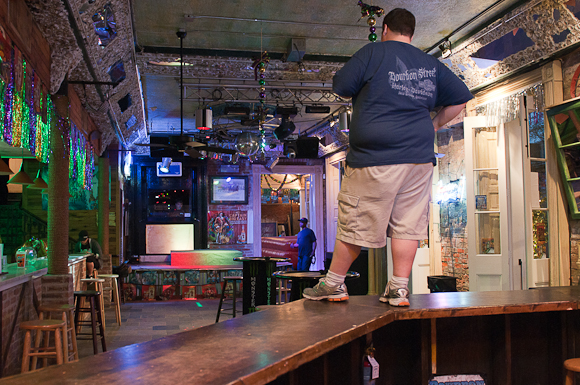 WHO is he talking to?

Everyone sure likes to have fun while they are in this city.  We certainly did.  We had a great time watching people dance, sing and enjoy a little Karaoke action.

I hope that you will enjoy our photographs.  I have such great memories from the trip that when I see the photos again I am ready to pack my bags and go back!  When can we leave? 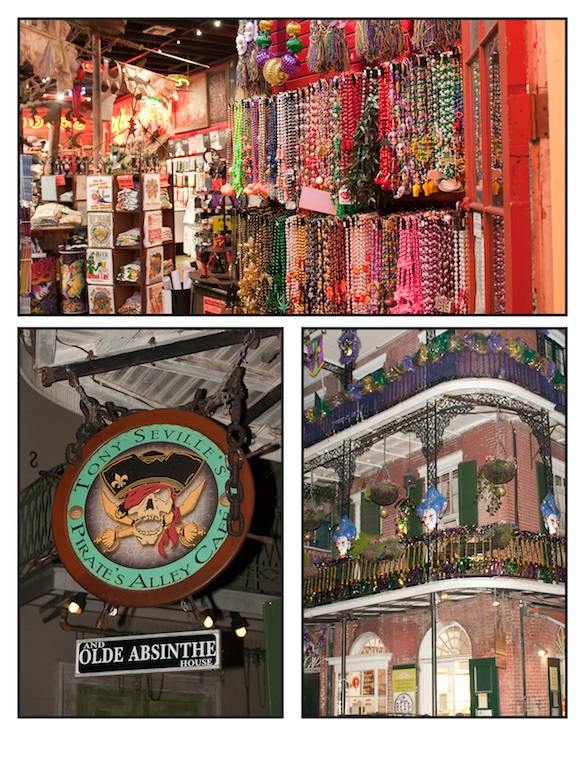 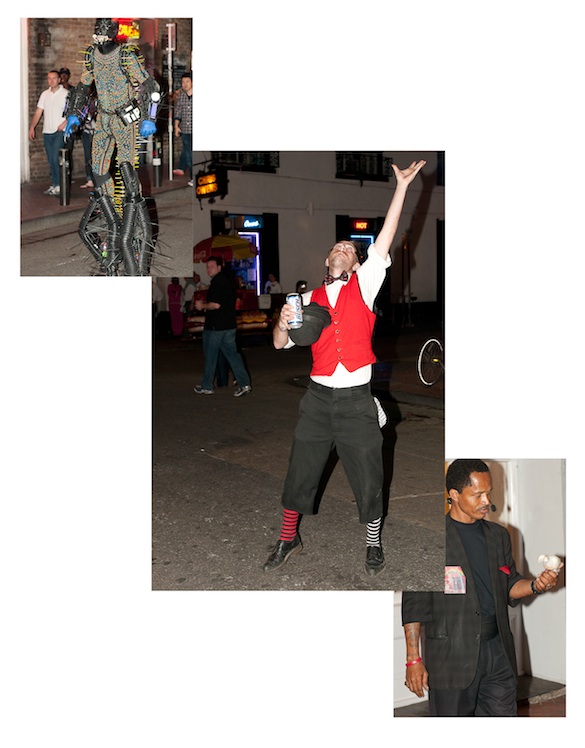 While we were in town we ate at many delightful restaurants including Ralph’s on the Park, Mr. B’s Bistro, Red Fish Grill, Restaurant August and Emeril’s.  I will be writing more about them later.  We had so many phenomenal meals, but the one thing we did not have was Creole Jambalaya, so I came home and made my own.  This dish is very popular in New Orleans and traditionally served during Mardi Gras, so I thought it would be fitting to serve some up while we are in the middle of Mardi Gras. 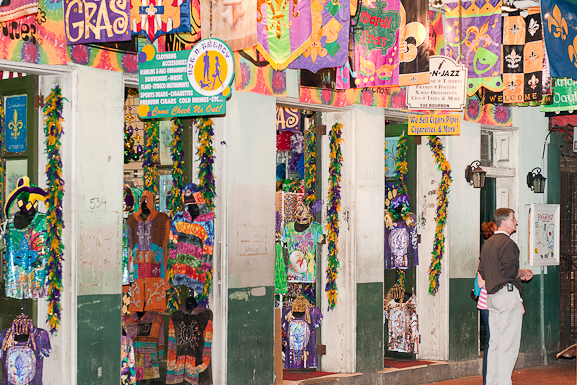 According to the New Orleans Seafood Cookbook (Ralph Brennan), jambalaya “is one of the oldest in the traditional New Orleans’s Creole cook’s repertoire.  Some have speculated that “jambalaya” is a contraction of jambon à la ya-ya – marrying the French word jambon, for ham, with the old African Bantu word ya-ya for rice.” 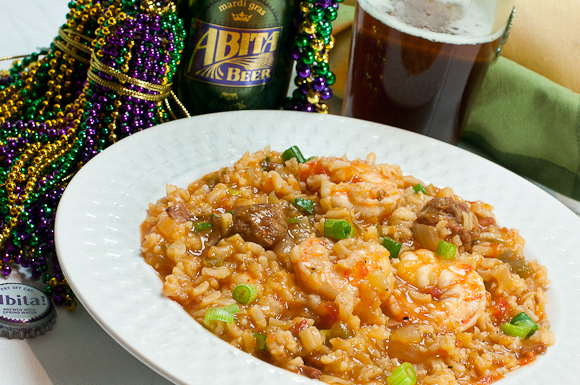 I loved my jambon and ya-ya!

This recipe had the classic flavors that I associate with New Orleans and Creole cooking.  It takes a little bit of time to prepare, but it’s that long simmering time that gives you such great flavors.  I used fresh Andouille sausage from a local sausage maker that I wanted to try.  It gave the jambalaya a nice depth of flavor, but next time I would use a cured sausage since it will remain firm during the cooking process.

I did not cook my jambalaya quite as long once the rice was added because I like mine more like a stew leaving more sauce rather than reducing it totally. There is nothing better than sopping up that sauce with some crusty French bread!

Serve this with a bottle of Abita Mardi Gras Bock (Abita is a Louisiana brewing company), bring out your beads and celebrate Mardi Gras just like a local!

Over medium-high heat, melt the butter in a heavy, non-reactive 6-quart saucepan or Dutch oven.

Add the sausage and pickled pork or ham and cook until all of the fat is rendered out of the meats, about five minutes stirring occasionally.

Add the yellow onions, the white part of the green onions and the sweet peppers, Cook the vegetables until they are clear, about five minutes, occasionally stirring and scraping the pan bottom clean.

Add the crushed tomatoes, tomato puree, garlic, bay leaf, table salt, black pepper, cayenne, and thyme. Cook and stir this base sauce about two minutes. (If the dish is being prepared ahead, allow the base sauce to cool, then place in a lidded non-reactive container and store in the refrigerator for up to two days. For the final preparation heat the base to a boil and proceed with the remainder of the recipe.)

Add the chicken stock and pepper sauce to the base and bring to a boil.

Reduce the heat to maintain a strong simmer, and simmer the liquid uncovered until it is reduced by one third, about one hour 15 minutes. Skim and foam or coagulates as they develop on the surface.

Return the liquid to a boil and stir in the rice.

Reduce the heat to medium and cook uncovered until the rice is just short of being done (it should still look a little firm in the center), about 25 minutes, stirring occasionally.

Add the shrimp and cook until the rice is tender and the shrimp turn bright pink, about three minutes. Do not overcook.

Notes for Making Ahead:
This recipe can be prepared up to two days ahead by completing steps 1 through 4, allowing the base sauce to cool a bit, then covering and storing it in the refrigerator. When it’s time to finish the preparation, bring the base sauce to a boil and proceed to step 5.

We participate in the Amazon Services LLC Associates Program, an affiliate advertising program designed to provide a means for us to earn fees by linking to Amazon.com and affiliated sites.
posted on February 28, 2011 in Main Dishes, Recipes, The South, Travel
30 comments »