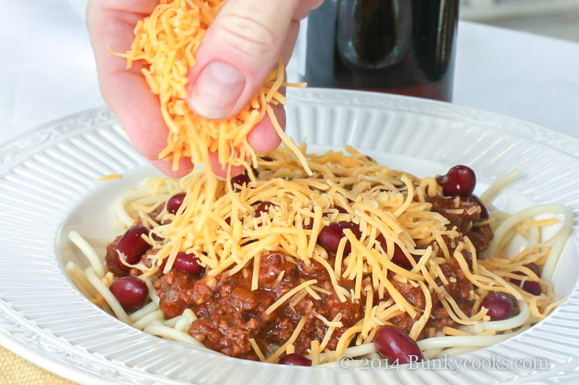 I have been making chili FOREVER. I am sure most of us have and I am certain that we would all say that we make the best chili or that we have some super top secret chili recipe from Uncle Whoever that we will never give up. Well, it seemed that Skyline Chili wasn’t giving it up either for awhile because until a week ago I could not seem to get it right.

I, frankly, had never heard of this Skyline Chili stuff until I married my hubby. He lived in Kentucky many years ago and first had this type of chili in Louisville. Apparently, it is now served in its home city of Cincinnati, Ohio as well as Indiana, Kentucky and even Florida (of all places). My chili was more of what I would consider “normal” chili. It has the beans mixed in with the usual ingredients (onions, green peppers, tomatoes, chili powder, etc.) and this Cincinnati chili is just made with meat. It is also served over spaghetti. Now who does that? I had never heard of such a thing.

There are also several brands of Cincinnati style chili with Skyline Chili perhaps being the most recognizable name. Gold Star would be the next competitor with Empress and Dixie bringing up the rear. I went online and found out that all of these brands of Cincinnati chili have their own locations, several sell their chili, spices, T-shirts and even golf balls on their websites.

All of these brands of chili are available in the can (oh, yuck!) and are primarily sold in the same states where they have their restaurants. Skyline Chili is also available in your grocer’s freezer (even here in Atlanta), so that is what my husband has been eating for years when he needed a fix.

I guess there has been some huge rivalry between these chili makers (especially the top two – Skyline and Gold Star). There are also myriads of recipes floating around and lots of discussions about what exactly goes into this chili to make it taste so different. Well, I will tell you that I have probably tried five recipes since this quest began and as of last week, the adventure is over. I have done it! I finally found a recipe that tastes just like the stuff my hubby had in Indiana years ago and has craved from the frozen foods department since then.

So, this is how I spent a day in the mountains with 10 degree temps, 50 mile an hour howling winds and one foot of icy snow. I made chili. This recipe I used (with great success, I might add :)) was adapted from About.com. I made some changes based on what I read in comments online and how things were progressing while it cooked.

I read many discussions about how to fix the beef prior to mixing it with the spices. One was to put the ground beef in a food processor first to chop the meat finer (I am not so sure if that worked or not, but I tried it). The other key to making this is to boil the beef first. It sounds gross and does not make for pretty pictures, so you won’t be seeing those here, but it works. You need to really work the meat to get it into the teeniest pieces possible. That is part of the difference of this chili.

I would say the real secret is in the addition of cocoa and cinnamon and the large amount of spices you add. The chili tasted really hot at first, but as it cooked, the flavors mellowed and created that just right blend of spices that makes Cincinnati chili so different.

I used an equal amount of ground round and ground chuck. That way I had good flavor from the chuck, but did not have to worry so much about the fat (since we wanted to eat it right away). I will say, however, that as with many dishes (especially chili) it was WAY better day two and day three. We could not stop eating it!

One more thing about this chili…it is talked about in a way that reminds me of eating hash browns at Waffle House. Here are the ways you can fix it.

Our new personal favorite would be the cheese coney. This would include the hot dog with chili, cheese, diced onions and mustard. We left off the onions and mustard (did not want to mess up the yummy chili flavor).

By the way, I cooked my chili for about eight hours (low and slow). The original recipe calls for simmering for three hours. Just trust me on this one and start it in the morning and let it cook ALL day. Better yet, cook it the day before and serve it the next day. No more frozen chili for us! 😉 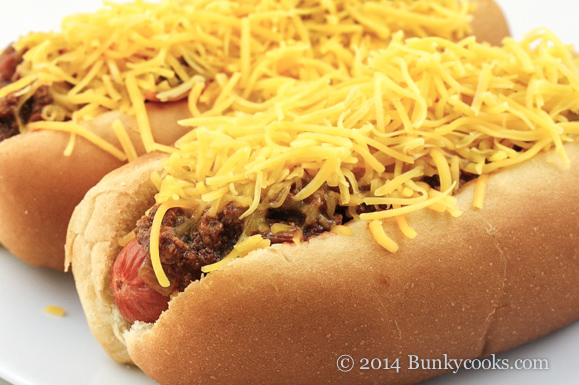 1. Put your ground beef in a food processor and pulse several times. Add beef and water to a 4-quart pot. Bring to a simmer while stirring until the ground beef is in very small pieces. Simmer for 30 minutes and add all the rest of the ingredients.

2. Simmer on low, uncovered, for 3 hours (longer is better, all day is best!). Add water as needed if the chili becomes to thick (I did need to do this several times, especially because I cooked mine all day).

3. Refrigerated the chili overnight, and the next day remove the layer of fat from top before reheating and serving (I really did not have any major fat to skim and I served it the same day).

We participate in the Amazon Services LLC Associates Program, an affiliate advertising program designed to provide a means for us to earn fees by linking to Amazon.com and affiliated sites.
posted on February 22, 2010 in Main Dishes, Recipes
79 comments »

END_OF_DOCUMENT_TOKEN_TO_BE_REPLACED

79 comments on “Cincinnati Chili – Mine finally tastes like Skyline Chili!!”