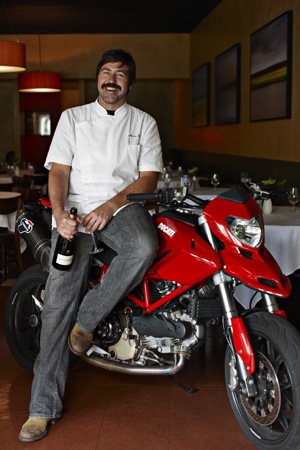 Charleston, South Carolina.  It is one of our favorite destinations.  Known not only for it’s history, Southern charm and beauty…Charleston is home to some of the best chefs and restaurants in the country.  What is it about Charleston that makes it such a special place?

There are few cities in the United States that have really prominent food cultures.  We just came back from New Orleans, which arguably, has one of the most distinctive food cultures in the United States.  Charleston, with its Lowcountry cuisine, is another city that combines its African and Caribbean influences along with Southern heritage and local ingredients to create its own unique flavor.

How Charleston became one of the top food destinations in the country and the cuisine of the region were a few of the topics we discussed with Chef Mike Lata of FIG when we met with him a few months ago. 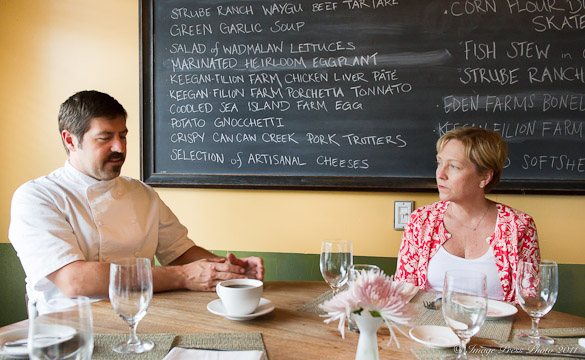 Sitting next to FIG’s board listing the evening’s menu

Lata is the Executive Chef and Partner/Owner of FIG, which opened in 2003.  Chef Lata is the 2009 winner of the prestigious James Beard Award for Best Chef Southeast (he was also nominated for the award in 2007).  In addition to other television appearances, articles and accolades, he appeared on Food Network’s Iron Chef in a battle against Jose Garces in 2010.

Lata was also one of the first chefs in the Southeast to work with local growers, purveyors and suppliers in an effort to bring the best and freshest ingredients into his kitchen.  He was inspired to do this while working as the Chef de Cuisine at Jean Banchet’s Ciboulette in Atlanta from 1993-1998.  In 1998, Chef Lata made the move to Charleston where he became the Executive Chef at Anson, bringing his farm to table philosophy with him.

In 2001, Lata journeyed to France to study French cuisine at Michelin Star restaurants in Southern France and Burgundy. It was this trip and the inspiration of the Charleston region that shaped his culinary style; dishes that are European in influence combined with the best local ingredients.  FIG stands for “Food Is Good” and that is a real understatement when dining at FIG.

When Lata first arrived in Charleston in 1998, he said the food scene was stale.  Every menu included salmon, grouper and tuna.  People dining in Charleston also wanted Caesar Salad and Crab Cakes, so that is what was on every menu.  However, that was soon to change with some of the up-and-coming chefs.

By the early-to-mid 2000’s, Charleston began to receive recognition for its emerging culinary scene.  Chefs like Bob Waggoner and Louis Osteen were gaining notoriety.  A few years later, Mike Lata, Sean Brock and Ken Vendrinski were just a few of those noticed by The James Beard House.  This year, Chef Craig Diehl of Cypress, was one of the finalists for Best Chef Southeast.  The Charleston Food and Wine Festival has also been a great success, celebrating it’s 6 year anniversary this year.  Lata said there was a real competition beginning to emerge among the chefs.  “There was competition, yet camaraderie; a kinetic energy.” 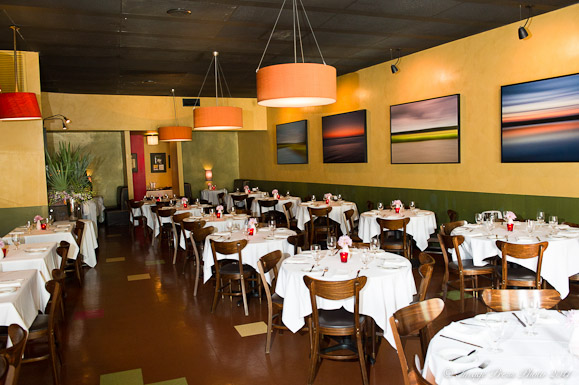 Charleston became even more popular when “food became a national pastime.”  Even non-food publications and magazines like Architectural Digest and Golfing Magazine were featuring Charleston chefs and restaurants.  There was national exposure to the city and their food scene.

In addition to this new exposure, Chef Sean Brock was focused on saving the original seeds and Heirloom varieties of plants from the region and preserving them with the help of Glenn Roberts of Anson Mills.  Meanwhile, Chef Lata was working with local fisherman to discover alternative fish that most of us have never heard of, like Banded Rudderfish.  “If you are trying to use sustainable fish, you cannot rely on household species like grouper and snapper.  These species have been susceptible to overfishing, are heavily managed and quite often, not available from Charleston area waters.  Fisherman can’t do anything with the fish they are catching if the chef can’t use them in the kitchen.”  This chef prefers to work with these local fisherman rather than import fish from someplace further away.

The tourism boom brought clientele that was culinarily savvy.  Lata said they could be more creative in the kitchen and restaurants began to replace the Crab Cakes and Caesar Salads on their menus with innovative dishes using local produce, meats and seafood.  “This was exciting when combined with the rediscovery of the culinary heritage of the region, the port culture and the native Gullah cuisine.  Charleston’s cuisine is one of the most identifiable on the East Coast.”

“You cannot replicate these types of cuisines and experiences in cities like New York, Boston or Washington.  Charleston has the history, beauty and natural resources.  In New York, you have technique driven food, but the food does not taste alive.  It is beautifully prepared, but not (regionally) inspired in its flavor.”  Lata said that in cities like San Francisco, the food is more casual, but there are better ingredients, so it tastes better.

“Charleston’s cuisine has the sensibilities of both sides: California style with the simplicity of the South.  The quality of ingredients we have available here is incredible.  The local eggs that we (the chefs) use are brilliant.  The yolks are bright yellow.  The same with the oysters, they are salty and taste like the ocean.  There is a deliberate palate with the flavors of the shrimp, crabs and local seafood.  Charleston has a taste that no other town has.  I know when I am home.” 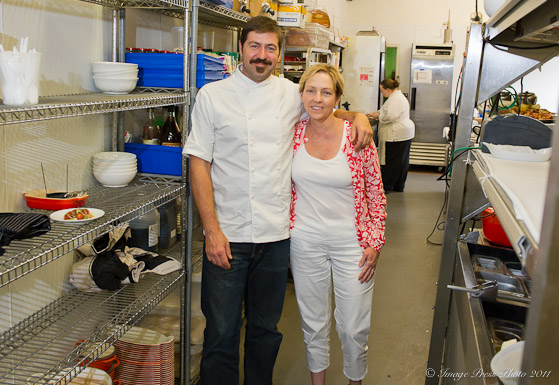 In the kitchen with Chef Lata

Page: 1 2
We participate in the Amazon Services LLC Associates Program, an affiliate advertising program designed to provide a means for us to earn fees by linking to Amazon.com and affiliated sites.
posted on September 7, 2011 in Chef Interviews, Main Dishes, Recipes
7 comments »