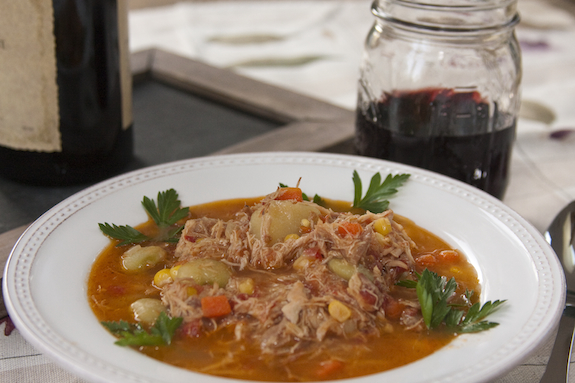 If you are not familiar with this group, then I will briefly explain that every month the participants in these challenges are given a “mission” to prepare whatever the chosen dish might be and then we all do a post on the same day with our interpretation of whatever we were to prepare (and it is supposed to be top secret until we all do our post!).

This month’s challenge is hosted by Wolf of Wolf’s Den. When I checked in for my first assignment, this is what I was told I had to prepare (in Wolf’s words).

“I chose a popular pan-Southern classic called Brunswick Stew. Brunswick Stew has a long, and oft debated history. Brunswick, Georgia claimed that the first Brunswick Stew was created there in 1898. There is, at the Golden Isles Welcome Center on Interstate 95, a bronzed stew pot with a plaque proclaiming this fact.

However, Brunswick, Virginia claims that the first Brunswick Stew was created there by a camp cook named Jimmy Matthews in 1828, for a hunting expedition led by Dr. Creed Haskings, a member of the Virginia State Legislature for a number of years. He was said to have used squirrel in the original Brunswick Stew created for the group when they returned. The hunters were at first skeptical of the thick, hearty concoction, but upon tasting it, were convinced and asked for more.

Every year, there is an Annual Brunswick Stew Cookoff that pits ‘Stewmasters’ from both Virgina and Georgia against their counterparts, and takes place every October in Georgia.

In the early 20th Century, the rivalry of the two Brunswicks helped make this dish as popular as it is today, and it quickly became a pan-Southern classic. Some recipe call for the original addition of squirrel, but most allow for chicken, turkey, ham, or pork, even beef on occasion. Rabbit is also used. The vegetables can vary widely from variation to variation, however, the Brunswick Stewmasters recipe says *exactly* what is used in competition stews, and states that “Adding any additional ingredient(s) will disqualify the stew from being an original Brunswick Stew.” However, most agree that, Brunswick stew is not done properly “until the paddle stands up in the middle.”

The first recipe is more traditional – long and involved, as can be many Southern recipes. The second was the very first Brunswick stew I ever tasted. Both are fairly straight forward and easy, requiring no special equipment, techniques, or super hard to find ingredients.” 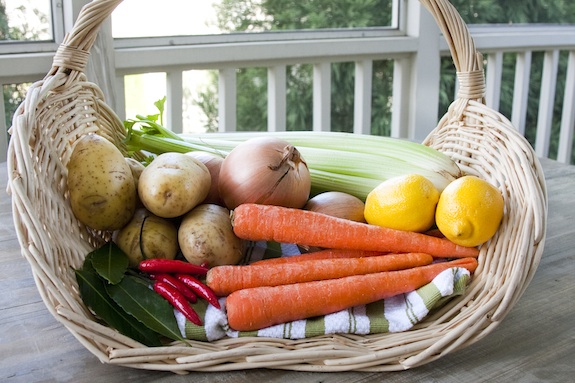 I first heard of and tried Brunswick Stew at Chowning’s Tavern in Colonial Williamsburg in Virginia when I was about 15 years old. I thought it was somewhat of a strange concoction and unlike anything else I had tasted. Of course, I grew up in Philadelphia and southern food was definitely a bit strange to me at the time. I did have Brunswick Stew a few more times later in life, but the last time had been at least 15 years ago. I always thought that it was a bit mild for my taste, so I definitely was going to add a bit of heat to give it some kick! 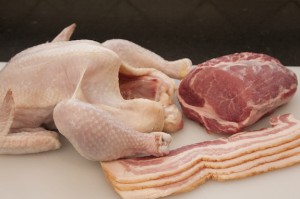 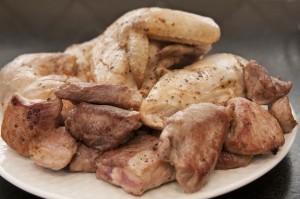 Between the two recipes, I chose the longer version (would you ever be surprised at that?). If I was going to make Brunswick Stew, I was going to do it right! I do have to say that I felt rather like I was in the Julia Child skit on Saturday Night with the chicken butchering and skinning and hacking up of pork pieces for this stew (or like an early settler). There were a few scary moments in my kitchen with slippery chicken chopping! The recipe called for cutting the chicken into pieces and then skinning it. Have you ever tried skinning a chicken wing? Well, let me just tell you that ain’t happening! 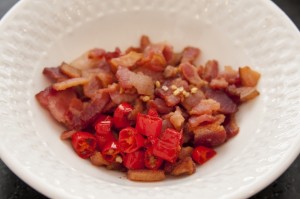 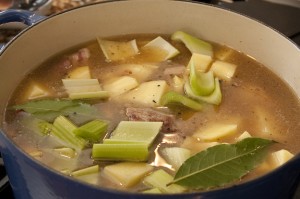 This recipe combines chicken and a pork loin roast with all the veggies (no wabbit in this one!). I do have to say that I shared several containers of this stew with some lovely older Southern ladies in the neighborhood and they were delighted! My hubby and I had it for dinner doused with Cholula sauce and really enjoyed it! Here is my version:

Adapted from “The Lee Bros. Southern Cookbook: Stories and Recipes for Southerners and Would-Be Southerners” by Matt Lee and Ted Lee
Serves about 12

1/4 lb slab bacon, rough diced
2 Thai or other dried red chiles, stems trimmed and sliced (I added the whole Thai chiles – seeds and all! If you do not want at much heat, leave out the seeds).
1 1/4 lb. boneless pork loin, chopped into large pieces
1 4-5 lb. chicken, quartered, skinned, and most of the fat removed
1 Tablespoon Kosher salt for seasoning, plus extra to taste
Freshly ground black pepper
10-12 cups low-sodium chicken broth (or use homemade)
2 Bay leaves
2 large celery stalks
2 lbs Yukon Gold potatoes, or other waxy type potatoes, peeled, rough diced
1 1/2 cups chopped carrots (about 5 small carrots)
3 cups chopped onion (about 4 medium onions)
2 cups corn kernels cut from the cob (about 4 ears) (I used frozen corn as fresh corn was not available)
3 cups butterbeans, preferably fresh (or defrosted frozen) (I used frozen lima beans as fresh beans were not available)
1 28 oz can whole, peeled tomatoes, drained (I did use some of the tomato juice in the stew)
1/4 cup red wine vinegar
Juice of 1 lemon
Cholula sauce to taste (You can use Tabasco, however, I think Cholula adds far more flavor.)

1. In the largest stockpot you have, preferably a 10-12 qt pot (I used a 7 1/4 qt Dutch oven which was barely large enough), fry the bacon over medium-high heat until it just starts to crisp. Transfer to a large bowl, and set aside. Reserve most of the bacon fat in your pan, and with the pan on the burner, add in the chiles. Toast the chiles until they just start to smell good, or make your nose tingle, about a minute tops. Remove to bowl with the bacon.

2. Season liberally both sides of the chicken pieces and pork loin with Kosher salt and pepper. Place the chicken and pork pieces in the pot and sear on all sides possible. You just want to brown them, not cook them completely. Add more bacon fat or olive oil, if necessary, to brown them properly. Remove to bowl with bacon and chiles. Set aside.

3. Add 2 cups of your chicken broth or stock to the pan and basically deglaze the pan, making sure to get all the goodness cooked onto the bottom. The stock will become a nice rich dark color and start smelling quite good. Bring it up to a boil and let it boil away until reduced by at least half. Add your remaining stock, the bay leaves, celery, potatoes, chicken, pork, bacon, chiles and any liquid that may have gathered at the bottom of the bowl they were resting in. Bring the pot back up to a low boil/high simmer, over medium/high heat. Reduce heat to low and cover, remember to stir every 15 minutes, give or take, to thoroughly meld the flavors. Simmer, on low, for approximately 1 1/2 hours. Taste the stock, according to the recipe, it “should taste like the best chicken soup you’ve ever had”.

4. With a pair of tongs, remove the chicken and pork pieces to a colander over the bowl you used earlier. Be careful, as by this time, the meats will be very tender and may start falling apart. Remove the bay leaf, celery, chiles, bacon and discard. (I strained the cooking liquids using a fine mess colander and put that back into the Dutch oven).

5. After you’ve allowed the meat to cool enough to handle, carefully remove all the meat from the bones, shredding it as you go. Return the meat to the pot, throwing away the bones. Add in your carrots, and stir gently, allowing it to come back to a slow simmer. Simmer gently, uncovered, for at least 25 minutes, or until the carrots have started to soften.

5. Add in your onion, butterbeans, corn and tomatoes. As you add the tomatoes, crush them up. Simmer for another 30 minutes, stirring every so often until the stew has reduced slightly, and onions, corn and butterbeans are tender. Remove from heat and add in vinegar and lemon juice, stir to blend in well. Season to taste with salt, pepper, and Cholula sauce (or Tabasco), if desired. (I added about a teaspoon of Cholula sauce).

6. You can either serve immediately or refrigerate for 24 hours, which makes the flavors meld more and makes the overall stew even better. Serve hot, either on its own, or with a side of corn bread, over steamed white rice, with any braised greens as a side. (I prefer it served as a stew, by itself. That is the only way I have ever had it).

This is great to freeze and use later, especially since the recipe makes a rather large batch.

We participate in the Amazon Services LLC Associates Program, an affiliate advertising program designed to provide a means for us to earn fees by linking to Amazon.com and affiliated sites.
posted on April 14, 2010 in Main Dishes, Recipes
16 comments »