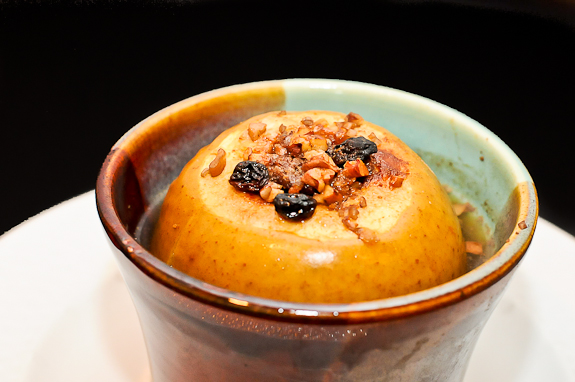 I hope you all had a wonderful Thanksgiving yesterday or just a lovely day if you don’t celebrate the holiday!

Mr. Bunkycooks had to do most of the cooking since I am still gimping around on the silly knee walker while recovering from my ankle surgery.  I was, however, able to make two pies (and paying for it today, I might add).  Thankfully, I made cranberry sauce in advance, so that only required a move from the freezer to the fridge.  Don’t you just love when that happens?

Mr. B made one heck of an awesome smoked turkey for Thanksgiving and if I can drug him and get it out of him he is kind enough, we may see the recipe at some point.  He says he’s not that easy, but I haven’t tried to coerce him just yet. 😉 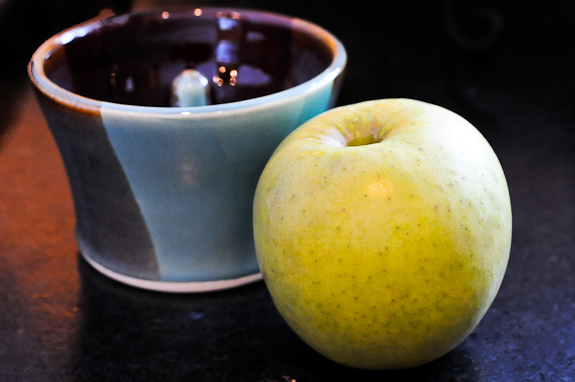 This was a really big apple!

Anyway, if you have had enough of the pumpkin and pecan pie stuff (I know I have), here is a recipe for a simple and delicious Baked Apple.  I could be on an apple obsession kick after the Green Appletinis!  This is perfect for an easy dessert when you want something a bit sweet after dinner, but not a sugar overload or a bunch of calories…unless of course you top it with some Bourbon Whipped Cream or homemade Vanilla Ice Cream!

I found this nifty and rather large handmade apple baker in a local artisan shop in Asheville, North Carolina.  If you are not as fortunate to find one of these near you, either this apple baker or this one should do just fine.  You want to be certain to have a good apple corer as well to make your life easier when taking out the center of the apple!  You want lots of space for all the goodies you tuck in there. 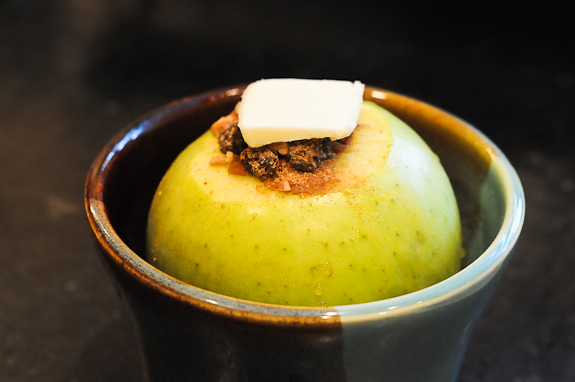 I used a beautiful apple, a Crispin (Mutsu), that was locally grown in North Georgia mountains.  These apples originated in Japan and are very similar to a Golden Delicious apple (which is what I would recommend using for the recipe if you cannot find a Crispin).  The one I purchased was huge (weighed about a pound), so it served two of us.  In fact, history says that the women who used to pick these apples called them “oven busters” because of their size.  It didn’t exactly “bust” my oven, but you get the idea…they are big apples!  If you use a smaller apple, be sure to reduce the cooking time.  I like my baked apples a bit firmer and not mushy, so I tend to undercook them.  I want a baked apple and not applesauce!

Bake an apple (the house will smell so good!), kick back, stay away from the malls during the Black Friday insanity and enjoy your weekend! 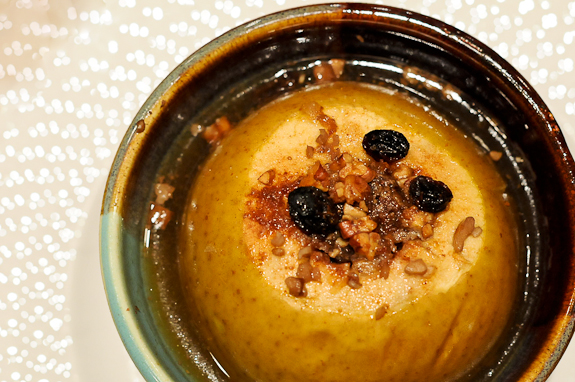 I wish I had one of these in the oven right now! 😉

Mix together the brown sugar, pecans, raisins and cinnamon. Fill the core with the mixture. Top with the pat of butter. Pour the apple cider around the apple.

Bakes at 375 degrees for 30-40 minutes, basting two or three times. Check after 30 minutes to see if apple if cooked through. I prefer when the apple is tender, but not mushy.

We participate in the Amazon Services LLC Associates Program, an affiliate advertising program designed to provide a means for us to earn fees by linking to Amazon.com and affiliated sites.
posted on November 26, 2010 in Desserts, Recipes
17 comments »