Wayne Young, our guide during our visit to Friuli while taking time away from his position as Sales Manager at Bastianich Winery, arranged for our visit to D’Osvaldo.  One of two small prosciutto makers in Friuli, D’Osvaldo combines the tradition of two curing methods, salting and smoking.

We were greeted by Andrea (Andrew) D’Osvaldo as we arrived at their villa.  He and his sister Monica are third generation artisans preserving their family tradition of smoking hams.  Andrew and Monica gave us an inside look at D’Osvaldo’s meat curing process and shared their story of why the European Community is not willing to recognize their uniqueness as an artisan producer and is recommending they conform to approved methods of curing and aging. 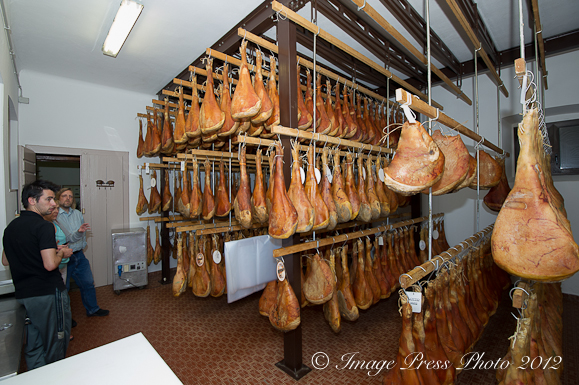 The aroma of the aging hams was unforgettable

Andrew and Monica’s grandfather, Luigi (or Gigi, as he was known), was a cattle trader and much of his business was with farmers in Hungary.  To make their own prosciutto, salami and preserve the meat from his cattle, Gigi adopted the tradition of smoking meats as he had seen at the family farms in Hungary.  He brought this tradition of smoking hams to Friuli eighty years ago.  The company, D’Osvaldo was formed in 1940 by Andrew and Monica’s father, Lorenzo.  It was here at the foot of the mountains in this ideal climate for aging hams, where they purchased the villa in 1982, and continue to salt, smoke and age the hams as their grandfather did eighty years ago. 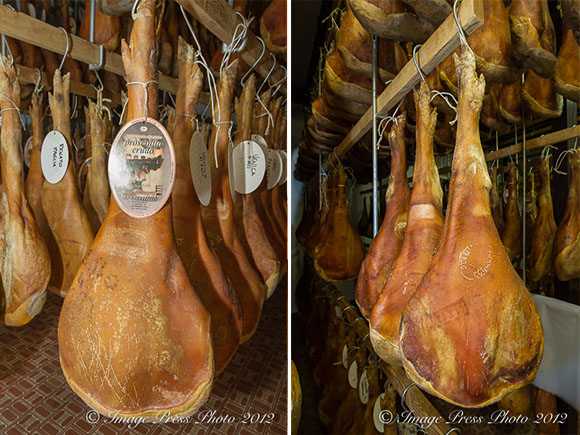 D’Osvaldo produces only 3,000 hams a year that are highly sought after for their quality and unique taste.  Their entire annual production is committed before the hams are aged between 18 to 20 months.  They use Duroc pigs (originally an American breed) that are bred in Friuli and collaborate with local farmers to raise these pigs free range.  Their diet is very important for the quality of the meat and the pigs are fed corn, soybeans, orzo, and potatoes to ensure a high level of fat.  D’Osvaldo’s products are only sold in Italy to restaurants and specialty shops.

D’Osvaldo hams are known for the fatty leg and sweet tasting meat.  The difference is in the way the pigs are raised and the process they use to cure the meat.  In addition to hams, they also make: Speck (ham leg without the bone that is stronger in flavor due to a mixture of spices added during the aging process), Guancale (the cheek or jaw of the pig), and Pancetta (or bacon). 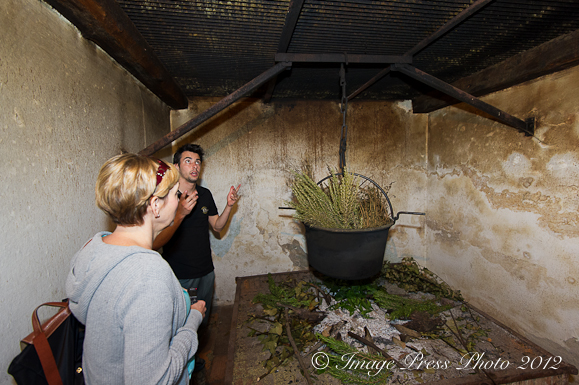 Andrew explained their curing process to us.  The first step is to salt the hams.  They begin this process in the colder months, starting in the Fall.  The pigs will have achieved the proper weight and fat profile and the falling temperatures aid in the curing process.  The individual hams are usually between 12 to 15 kilograms (26 to 33 pounds) to start.   The salting is done with marine (or sea) salt.  After 15 to 18 days, the hams will have lost much of their moisture.  The salt is washed off and they are then hung on the second floor of the Fogolar Friulano (smoke house). 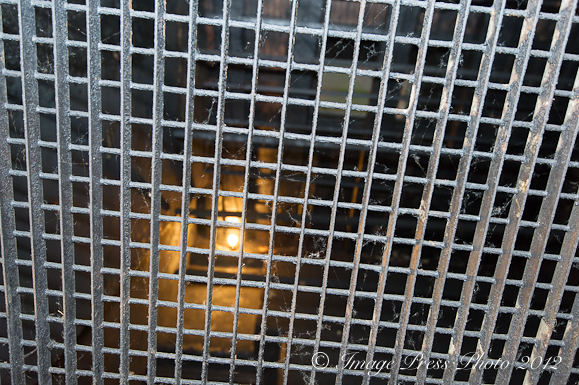 The bottom floor of this building is where the special blend of cherry, laurel, and grape woods burn over a stoked fire infusing the meat for three days.  The fire also heats a heavy iron pot filled with water and aromatics including juniper, rosemary, fennel, and melissa (lemon balm).  As the water evaporates, the essence of herbs intermingles with the burning woods on the fire.  The smoke wafts up the chimney to the second floor and  flavors the hanging meats.  Andrew called it, “the subtle and lovely smoke,” while describing the tradition of his grandfather from almost a century ago.  “The smoke is always moving as it drafts up through hay and barley,”  he told us.  It is this special blend of herbs and wood that make their hams so sweet and unctuous and in such demand. 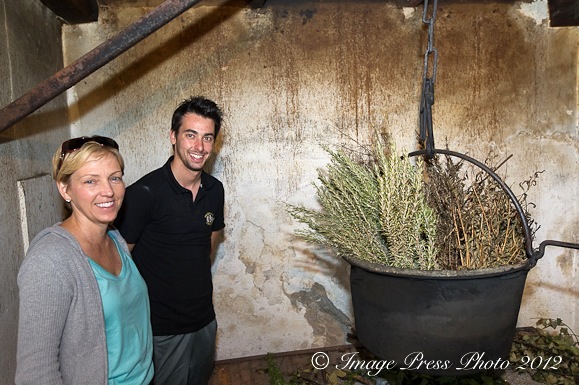 You could still smell the charred wood and aromatics

Page: 1 2 3
We participate in the Amazon Services LLC Associates Program, an affiliate advertising program designed to provide a means for us to earn fees by linking to Amazon.com and affiliated sites.
posted on September 8, 2012 in Appetizers, Europe, Recipes, Travel
6 comments »

END_OF_DOCUMENT_TOKEN_TO_BE_REPLACED

6 comments on “A Visit to D’Osvaldo, Prosciutto di Cormòns in Friuli, Italy & a recipe for Prosciutto Purses (Fagottini di Prosciutto)”