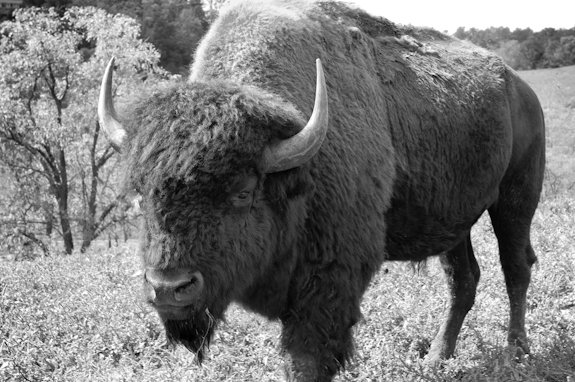 Bison are sustainable animals due to their rotational grazing patterns. They also can handle temperatures into the low 100 degrees. Cattle cannot handle the temperature extremes that bison can. 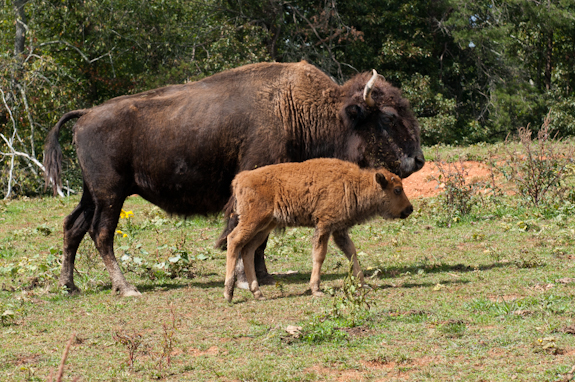 Some people now believe that the bison did not migrate in one huge herd and go thousands of miles as was once thought (such as in Lewis and Clark’s accounts). At one time, there were between 30-60 million bison on the North American Continent.

You might remember reading books or seeing films where settlers or trains had to wait days for the herds to move before they could travel past them. This could certainly have occurred with smaller herds, considering there were such large numbers of bison. It is very likely that the bison may have spent summers in Colorado in the mountains where it was cooler and then migrated to Northern Mexico in the winter or spent summers in Canada and moved down to the plains in the winter. 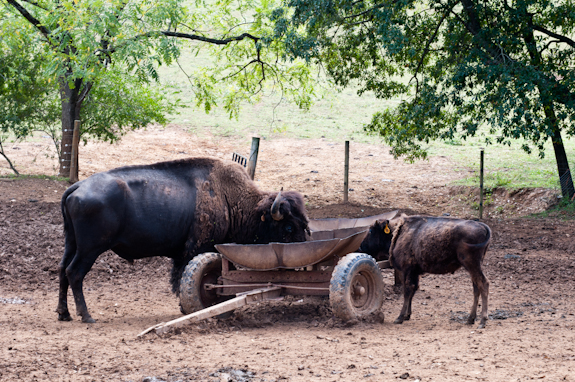 Many of us have heard or read about the poor treatment of animals that are being raised for food. If you are a farmer, you do it because you love farming and you treat the animals well. I am sure there are some instances, which garner all of the headlines, where animals are not treated well, but the vast majority of these animals are treated with respect and are harvested humanely.

Stress on the day an animal is harvested will cause the meat to taste gamey and be tough, so farmers and their hands are trained to keep them calm through the harvesting process. There is an expression: “to honor the animal.” Farmers use it to describe their respect and care of the animal in providing food for sustaining our lives. 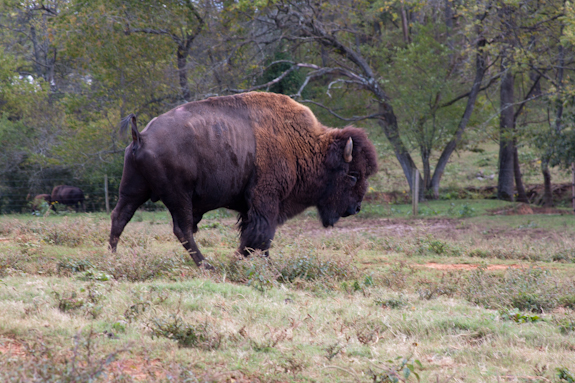 This upward tail is not something you want to see if you are close to the bison!

If you choose to eat red meat, as we do, I strongly suggest that you know where it comes from and how the animals are raised. We also believe in supporting smaller farmers and places that we have personally visited.

Thank you so much to Dr. King and especially Frankie, for taking the time to show us around your farm and for allowing us to spend some time with these spectacular creatures. I also want to extend a personal thank you to Frankie for grilling some awesome bison burgers at the farm for my birthday celebration!  ) We learned so much and I have an entirely new perspective and respect for the American Bison and the sustenance they provide. 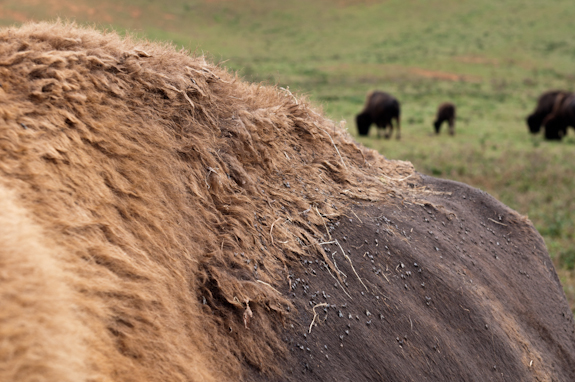 Flies are a constant irritant to the bison.

In true Pratesi Living fashion, I had to bring home some bison to find the best way to prepare it. Here are a few tips if you are interested in trying bison for the first time. Bison meat is redder than beef because it does not have marbling. Due to this fact, it also will cook much quicker. It will not shrink like beef when you cook it because it is so lean, so pretty much what you see is what you get. Frankie put a little olive oil on the burgers before grilling them, which I would suggest since they are so low in fat. (Roger also did that when he cooked our sliders.) 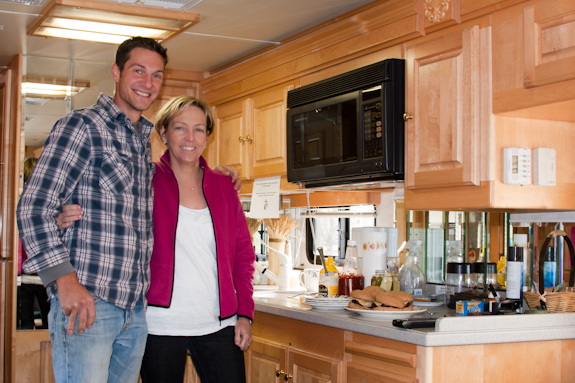 Frankie and Bunky in the RV having lunch.

We have grilled some of the Rib Eye steaks (Frankie’s personal favorite) and added a little olive oil, along with basic seasoning, prior to grilling. They were incredibly juicy and tender and not at all fatty or greasy like a beef Rib Eye. Roger also broiled one indoors with a little salt and pepper. They both were delicious!

Our personal and fun favorite so far is sliders. After all, who doesn’t love a slider?? We are enjoying the idea of the mini burgers these days and the bison meat is a perfect way to prepare them. I added a little chipotle mayo, homemade bread and butter pickles and we later topped them with homemade coleslaw. They will be a perfect addition to your game day food table this bowl season. 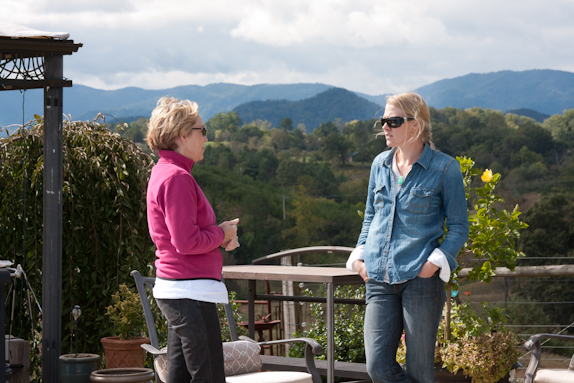 One of the differences that I noticed with eating bison versus beef is that is seems to digest easier. I also feel more satisfied with eating less. These are all good things and enough incentive for me to include bison on the menu at our home on a regular basis. If you are interested in trying some of the Carolina Bison, you can order through their website. Bison is also becoming more readily available in many supermarkets. 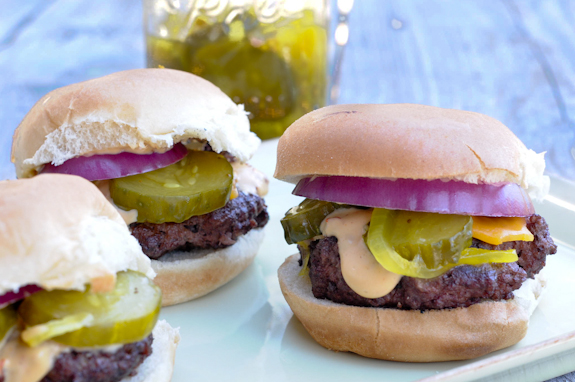 These will be a huge hit for football season!

P.S.  The King family is looking to create the Return of the Buffalo Refuge. They are in the process of trying to find the appropriate tract of land to realize this project. I wish them the best of luck on this venture and hope we get to see this when it becomes a reality. 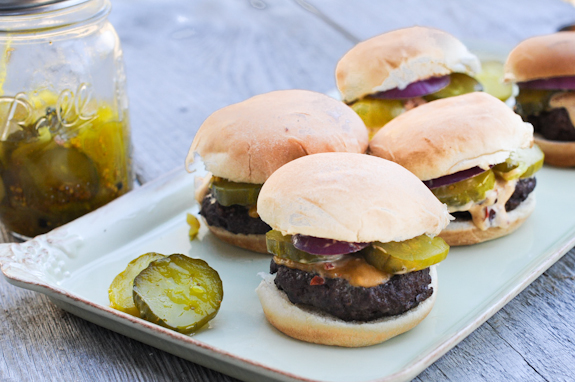 I’m ready to make more of these!

If you are interested in reading more about the American Bison, here are some suggestions.  The history behind this incredible animal is fascinating.

American Buffalo: In Search of a Lost Icon – Steven Rinella 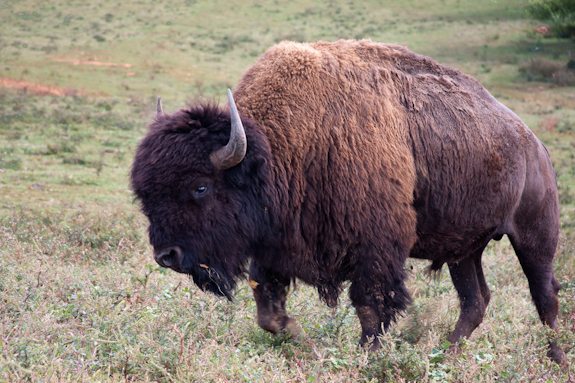 Fire up the charcoal grill.

Form bison into five patties. Rub each patty with a little olive oil. Sprinkle with salt and pepper. Cook the burgers until almost done (medium well). Put cheese on top and cover grill for a few minutes to melt cheese.

Mix all ingredients together. Taste for seasonings. Chill, covered, in the refrigerator until ready to use.

We participate in the Amazon Services LLC Associates Program, an affiliate advertising program designed to provide a means for us to earn fees by linking to Amazon.com and affiliated sites.
posted on November 30, 2010 in Condiments, Farms and Artisans, Main Dishes, Recipes, Travel
16 comments »