Friday afternoon provided the first opportunity to get a glimpse of the Tasting Tents and other festival participants and sponsors.  There was a nice flow and number of people that afternoon.  We enjoyed creative bites prepared by several chefs and restaurants, in addition to the more traditional barbecue and fried chicken.  There was also what seemed an endless supply of wine, bourbon and other spirits, including moonshine, which has roots in Appalachia and the north Georgia mountains.  Craft cocktails are definitely the “in” thing right now and there were plenty to go around. 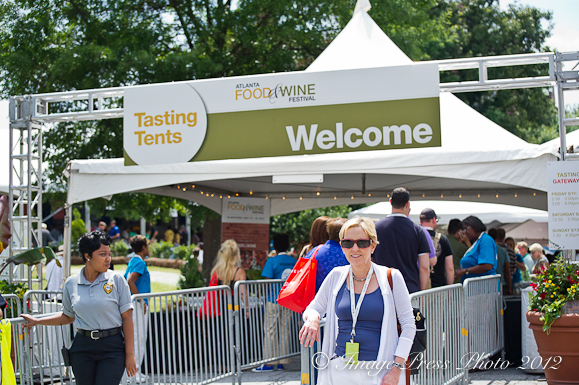 First glimpse of the Tasting Tents 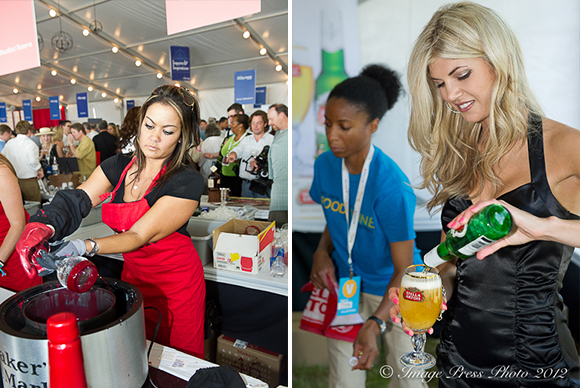 Yes, there was bourbon and beer and an option to rim your glass like a Maker’s Mark bottle 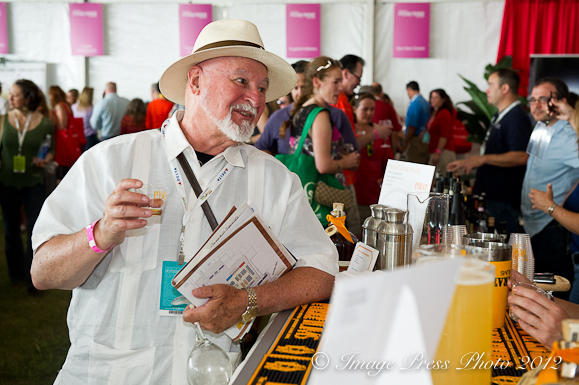 Mixology reigned supreme over the weekend 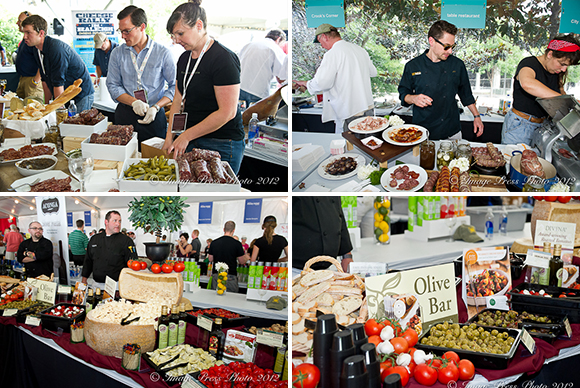 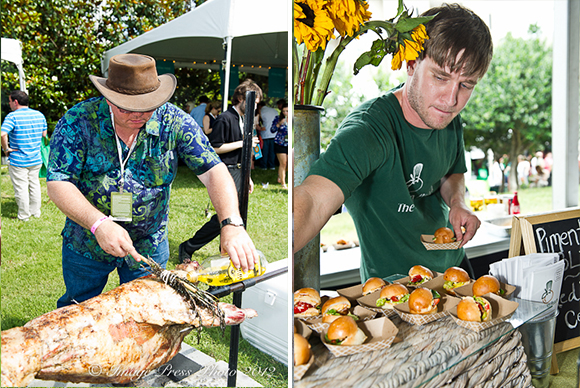 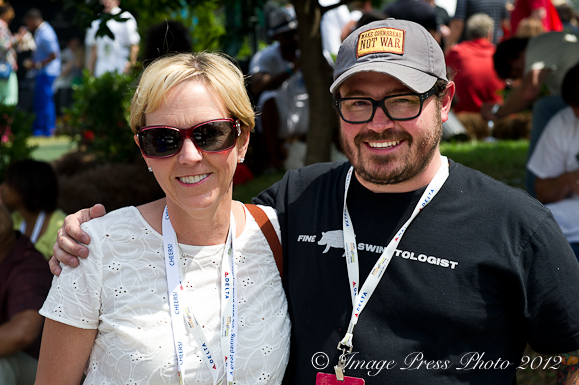 Saturday afternoon brought on the crowds as everyone headed to the Tasting Tents following the morning sessions.  We enjoyed a few nibbles and a local brew or two and then welcomed the air conditioning at the Loews Hotel just in time for the Southern Cocktail Hour and cocktail throwdown, emceed by Chef Edward Lee (Louisville, KY).

We enjoyed a little bit of our own tour of Atlanta that evening with Chef Anthony Lamas (Louisville, KY) and one of his cooks from Seviche, A Latin Restaurant, Tina.  After hitting a few of our local favorites (Local Three, Canoe and our own wine cellar), we enjoyed a relatively low key evening before the last day of the festival. 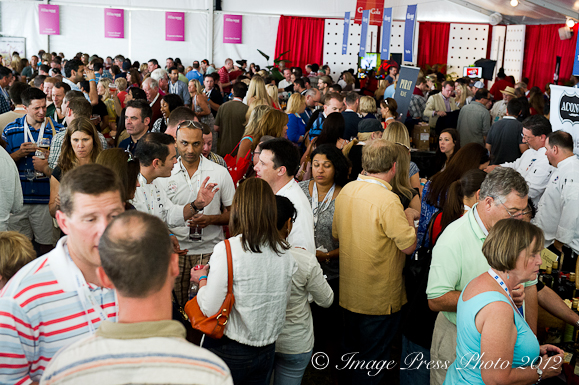 It was a busy Saturday afternoon at the Tasting Tents 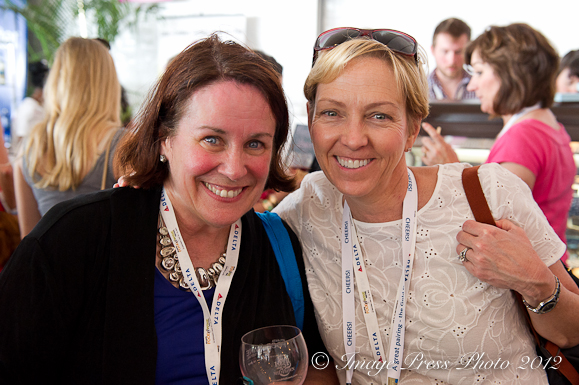 Look who I found in the crowd! With Nancie McDermott 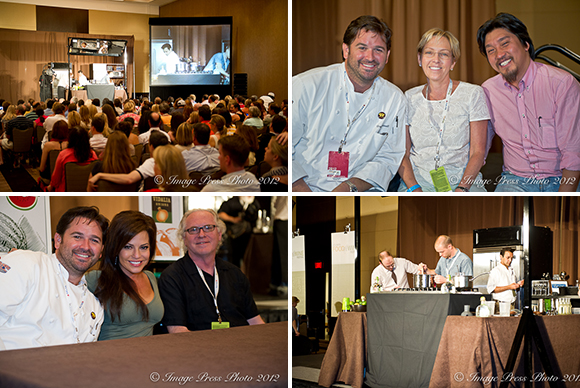 Sunday brought the rains but apparently not dampened spirits as the Tweets continued from the final day of the Atlanta Food and Wine Festival.  The event’s second successful year was retired at a closing party in the Westside Provisions District at Abattoir, Bacchanalia and JCT Kitchen & Bar.

Still recovering from the festivities in New York the prior weekend, I chose to stay home on Sunday and do some much needed catching up.  I enjoyed the two days we attended the festival.  It was enough time to get a real feel for the event, attend a few sessions and experience many of the chef’s creations along with the various wines and spirits offered.

I have one suggestion for the festival organizers.  It would be nice to have a larger venue for the Tasting Tents next year. With the continued success of the festival and positive press coverage from this year’s event, visitors will come in even greater numbers to Atlanta next year.  On the second day, Saturday, I thought it was too crowded to really enjoy the tents with the large number of people in attendance.  I heard a number of people make the same comment.  That’s just my humble opinion.

If you are in Atlanta next year for the festival, I would suggest a pass for a day or two and attending a few of the special events for a good perspective of what the Atlanta Food & Wine Festival has to offer. 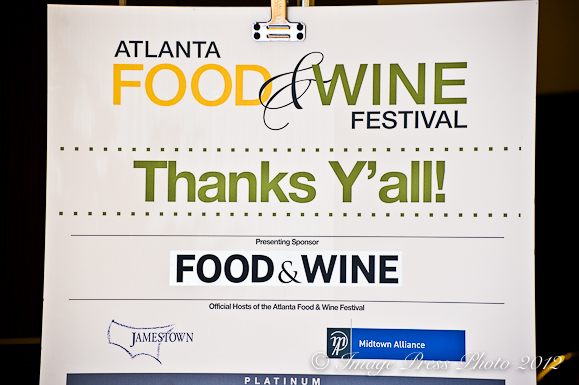 Disclosure – We were guests of the Atlanta Food & Wine Festival at these events.  I was not paid to write any posts and the opinions expressed are my own.

We participate in the Amazon Services LLC Associates Program, an affiliate advertising program designed to provide a means for us to earn fees by linking to Amazon.com and affiliated sites.
posted on May 17, 2012 in Events, The South, Travel
9 comments »