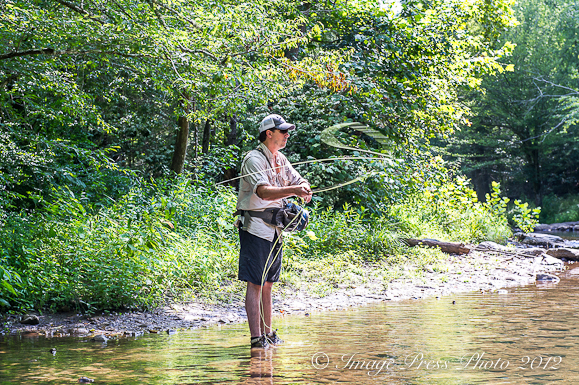 Roger had the opportunity to go fly fishing with Executive Chef Joseph Lenn of The Barn at Blackberry Farm in Walland, Tennessee during our visit several months ago.  Once an avid fly fisherman, Mr. B thoroughly enjoyed his day fishing with Joseph and has dubbed him “Trout Slayer.”  Read on to find out why.  Joseph has also shared one of his favorite recipes for preparing trout.

This summer, we had the pleasure of participating in an outdoor culinary feast that was prepared with the freshest ingredients, harvested from the adjoining garden, prepared in a pop-up kitchen and served on picnic tables that were dressed for the formal occasion.  Blackberry Farm, located in Walland, Tennessee, hosted the dinner.  It was the culmination of a three day event with participants from across the country that made their way to the seclusion of this Smoky Mountain resort to enjoy what many call the best culinary experience in the United States. 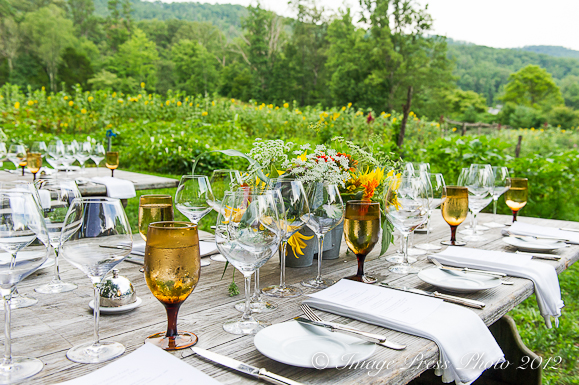 Dinner in The Garden at Blackberry Farm

Dinner had been served.  The local band had packed their instruments and departed.  Most of the guests had retired for the night.  The hardcore devotees of food, wine, and bourbon remained behind sharing favorite memories of bygone days.  Sitting around the formally attired picnic tables, the laughter and tales increased with each sip of spirits as the night air chilled and the stars sprang to life.  We sat with Joseph Lenn, Executive Chef at The Barn at Blackberry Farm and Holly McNeilly, also of Blackberry Farm and her boyfriend Trei, talking about our best memories of food and travel. 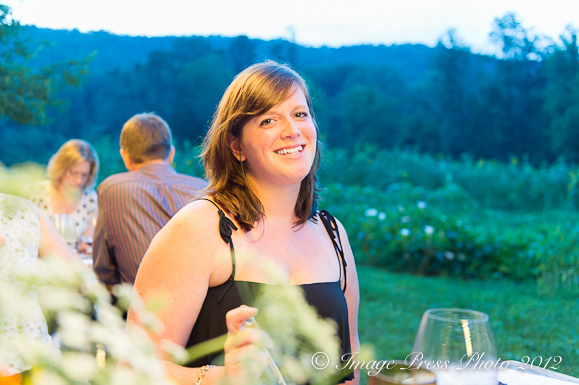 Like a parent sharing pictures of their kids, Chef Lenn was flipping through his iPhone photo gallery showing his prized best dishes when we caught a glimpse of a different trophy, this one a large trout that he caught while fishing.  It seems his iPhone has as many pictures of fish as it does pictures of food.  He began talking about his real passion, fishing.  Not just any fishing, but fly fishing for trout.  Now this was a conversation that really got my attention.

Lenn talked about his childhood and how he discovered his father’s fishing rod and reel, in the basement, collecting dust, as his father had retired it due to family responsibilities. He asked his dad if he could use it, as you would expect from a proper young man who grew up in the South.  And so began Lenn’s lifelong love of fishing.  He talked about how fishing has forged a unique relationship with his father, Jerry Lenn.  Joseph’s fishing passion is also now shared by his father.  Lenn said, “I go fishing every chance I get and my dad is often my fishing partner.  When one can’t make it, we share our stories by phone.”

I told him about my love of fly fishing and how, as a boy, my family would travel from New York to Idaho and we would fish the Snake River for brookies, browns, and cutthroat trout.  The fondest memories of those years were the shoreline lunches of just caught fish served pan fried.  My dad and Uncle Garland would clean the catch while mom and Aunt Mae prepared the dishes.  Food creates such deep and lasting memories. 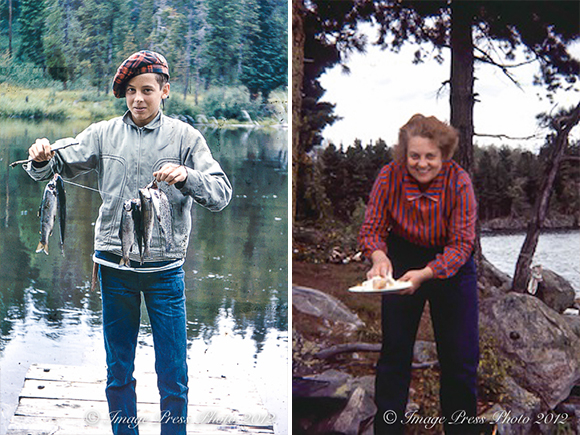 Master B, 1964 and Aunt Mae preparing a shore lunch 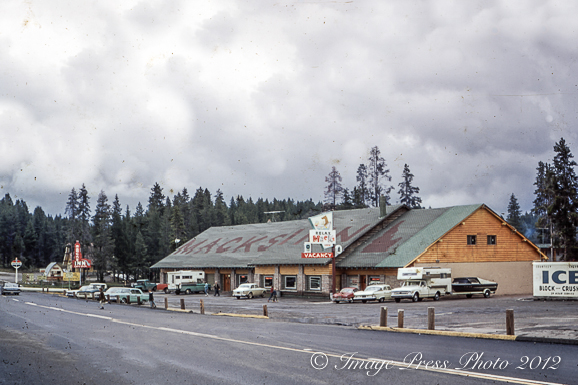 I told him that nowadays I fish the mountain rivers of North Carolina for rainbow trout.  I was so energized over this conversation that I didn’t want the night to end.  That’s when Joseph said, “Well, tomorrow is my day off and I’m going fishing.  Do you want to go?”

Early the next morning, not long after our late evening conversations ended, we made our way to the fishing cottage at Hesse Creek.  Located on Blackberry Farm property, we chose this location as I didn’t have the license or equipment needed to fish public rivers.  The fishing cottage contained all the equipment necessary to make me a weekend warrior of the river.  Boots, rods, reels, flies. 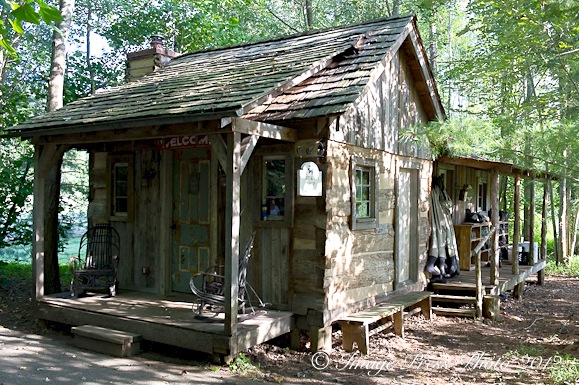 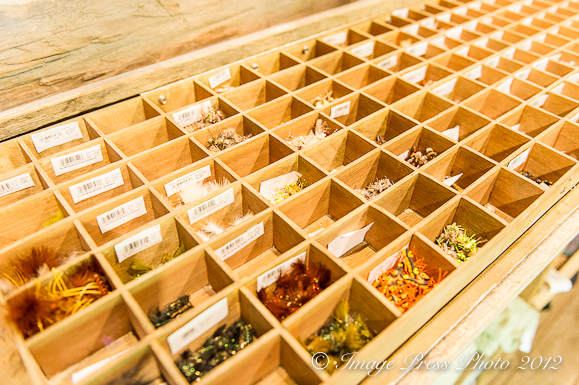 I looked through the bin of flies and the wall of rods and reels.  I told Joseph that I still had my Uncle Garland’s handmade bamboo fly rod, which is now close to 80 years old.  While not the best of rods that I own, it holds a special place, not because it is now considered a collector’s item, but for the wonderful memories of my uncle. It was my uncle that encouraged me to fly fish. 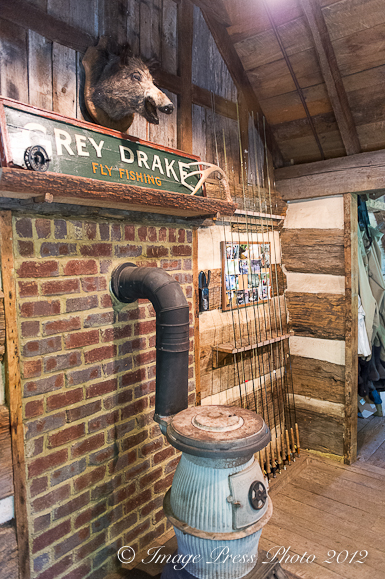 Rods and reels at the fishing cottage

It was as a preteenager, on my family’s first trip to Idaho, that I learned to fly fish.  It requires a unique skill, compared to other forms of fishing.  In many ways it is an art that can take a lifetime to perfect.  Fly fishermen appreciate the beauty, serenity, and strategy of fishing as much a prize as the fish that they might catch along the way.   I remember the first time I threw a fly in the cold, swift moving current of the Snake River at Macks Inn, Idaho.  I was twelve years old.  Admittedly, I struggled to cast the fly properly.  The first cast, strike.  With a lot of coaching from my fishing guide, Robert, I landed my first trout.  Imagine your first cast with a dry fly, landing an 18-inch cutthroat trout.  I was hooked. 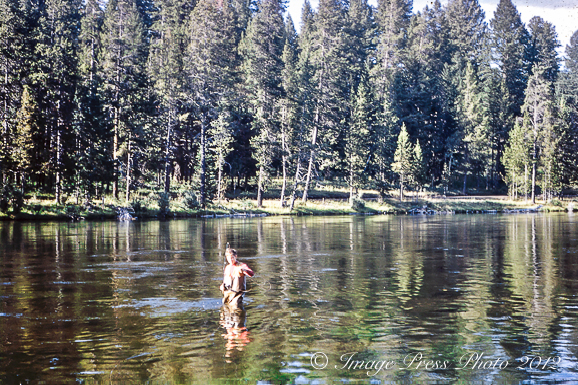 Page: 1 2 3
We participate in the Amazon Services LLC Associates Program, an affiliate advertising program designed to provide a means for us to earn fees by linking to Amazon.com and affiliated sites.
posted on October 14, 2012 in Main Dishes, Recipes, The South, Travel
7 comments »