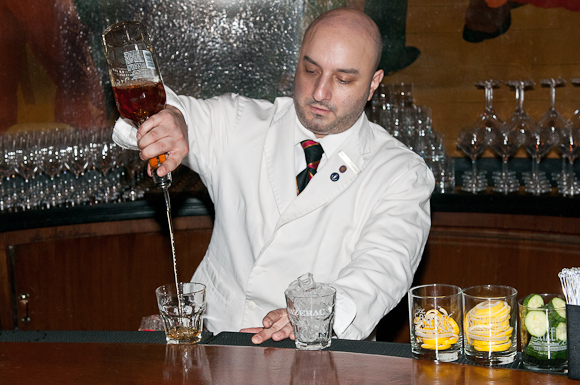 Happy Friday!  It’s time for the weekend and probably a few drinks or cocktails…don’t you think?  What better drink to usher in your weekend than a Sazerac?  After all, it is the official drink of the city of New Orleans and Mardi Gras and Fat Tuesday is next week!

As you may know, if you have been reading Bunkycooks this week, we spent several days in New Orleans last week eating and drinking our way through the city with Denise and John from Newf in My Soup and we had one heck of a good time doing it. 🙂 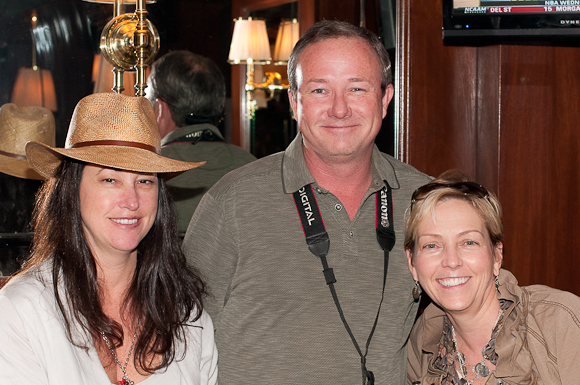 We are having some kind of fun in New Orleans (maybe too much?)!

One of our many stops in this culinary journey was to Mr. B’s Bistro in the French Quarter.  It was here that I first tried the Sazerac and now I am hooked! 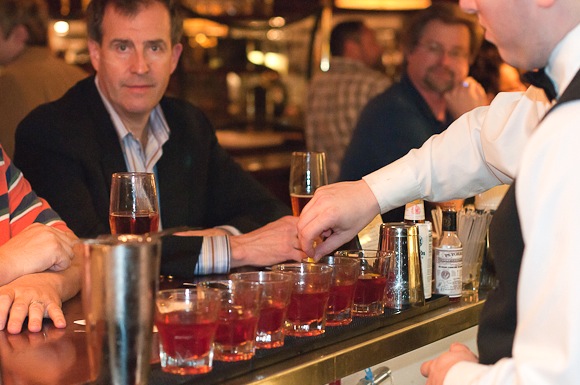 They make lots of these cocktails at Mr. B’s Bistro. 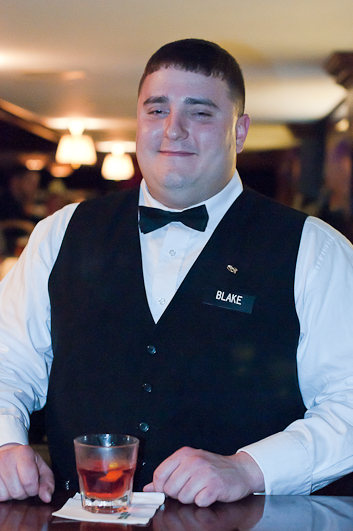 I think Blake has had a few Sazeracs!

If you are interested in the history behind this delightful cocktail (as we were), then you must visit the Sazerac Bar at The Roosevelt Hotel in New Orleans and speak with Russ Bergeron, the mixologist/historian in residence. 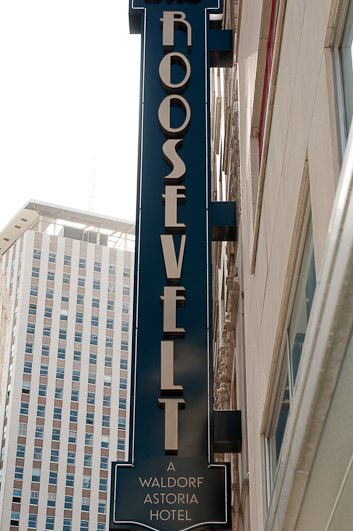 Russ, who helped reopen the Sazerac Bar in 2009 (after Hurricane Katrina and a major renovation to the hotel), says they serve about 40,000 Sazerac cocktails a year.  A native New Orleanian, Russ worked as a bartender for twelve years and then was the Wine Director and Sommelier at Emerils’s for ten years.  I think he just might know a thing or two about mixing up this rather famous local cocktail. 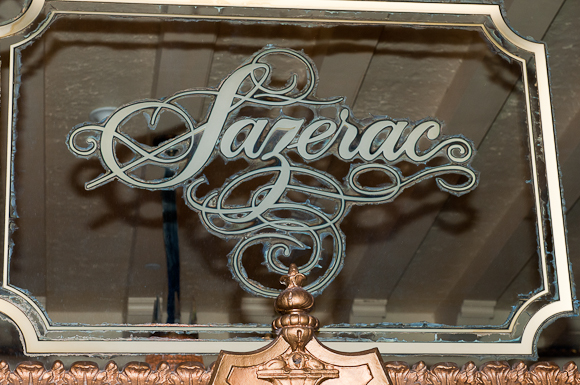 According to Russ, this cocktail’s history traces back to the 1800‘s when Antoine Amedie Peychaud (who owned an apothecary on Royal Street) made Peychaud bitters from an old family recipe.  He also enjoyed a fine French Cognac that was available at the time, Sazerac, so he created the Sazerac cocktail with the addition of a sugar cube and Herbsaint (better known as Absinthe).  Peychaud, who was quite fond of this drink, then opened the Sazerac Coffee House (euphemism for saloon) on Exchange Alley. 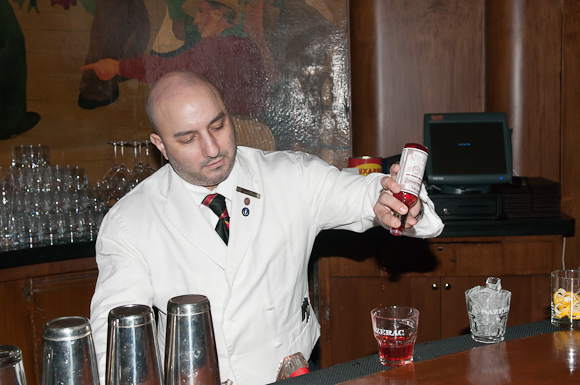 You will need a good Rye Whiskey and Peychaud bitters to make this drink. 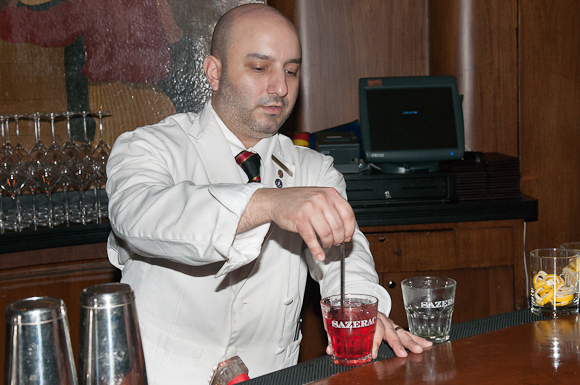 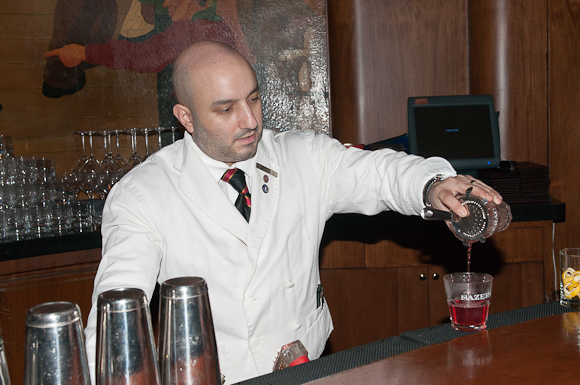 Strain the drink and pour into a chilled glass coated with Herbsaint. 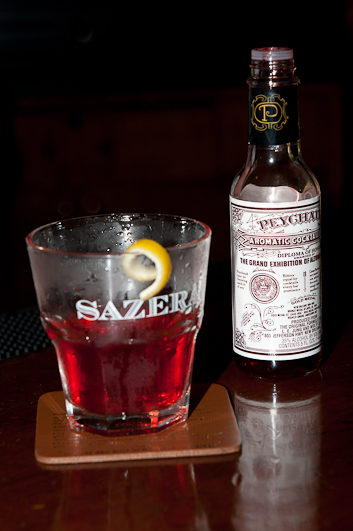 Sometime in the 1870’s, a gentleman by the name of Thomas Handy took over the ownership of the saloon and replaced American Rye Whiskey for the French Cognac, which was difficult to find during those times after the phyloxxera epidemic in Europe.

The Sazerac Bar eventually relocated to the The Roosevelt Hotel in 1949 and that is where it remains today.  The original Sazerac Bar was in an area where the gift shop is now located and was moved to its current location in 1958.  This beautiful, historic bar is 72 years old and contains all of its original hand painted murals and hardwoods. 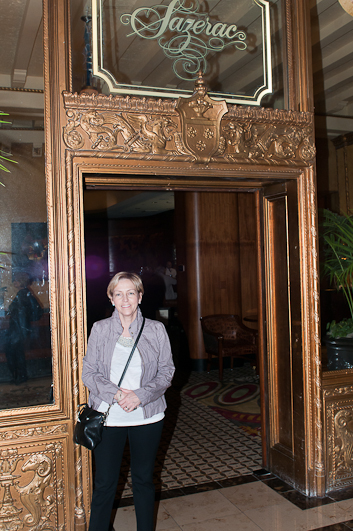 I was smiling when I left the Sazerc Bar!

Russ told me that the King of Rex, who is usually a wealthy and prominent New Orleanian, will get dressed for the parade and then have a Sazerac (possibly two?) and then get on the float for the parade on Fat Tuesday.  What a way to start your day!  He looks like the guy from Burger King! 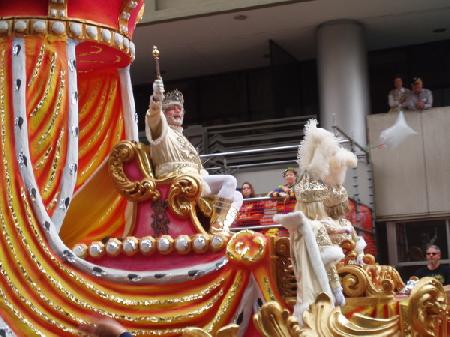 I’d have a couple of Sazeracs, too if I looked like the King from Burger King! (Photo from the internet)

We came home from New Orleans armed with the original recipe from the Sazerac Bar, Peychaud bitters, a bottle of one of the recommended rye whiskeys and Herbsaint (Absinthe).  I made the cocktail precisely as it was written and ended up with a very different drink than I had in New Orleans.  I even made it a few times each with both sugar cubes and simple syrup (what they use in the bars) just to be sure I was doing it right.  By the way, I thoroughly enjoyed all of them with Mr. Bunkycooks and my neighbor. 🙂

In pursuit of answers to this dilemma, I called Russ!  Russ told me that they tend to use a bit more of the bitters and the simple syrup when making them in the bars.  They are much redder in color and not as heavy in texture.  Russ uses the Sazerac rye whiskey, but Blake (at Mr. B’s) used what we did (Old Overholt), so the difference was not in the whiskey. 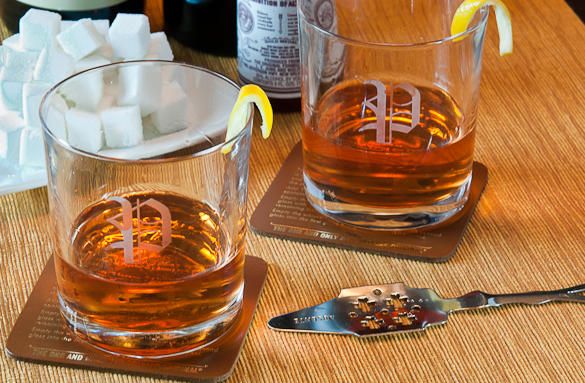 I really liked the Sazeracs that I had in New Orleans, but after trying a few from the original recipe last evening, I could be persuaded to go either way! Mr. B prefers the original version which has a heavier texture similar to a Sherry or a Cognac.  The drinks in New Orleans were more like a mixed drink.  To confuse the situation even more, Russ told me that Galatoires Restuarant makes them with bourbon and serves them over ice.

I suggest you head to New Orleans and try a few for yourself after making this original recipe and then tell me what you think!  I do not think you will be disappointed with any of them.  By the way, I will be working on a very scientific experiment over the new few weeks with Mr. B and my neighbor trying to get the Sazerac perfected.  I will let you know how that turns out…if I can remember! 😉 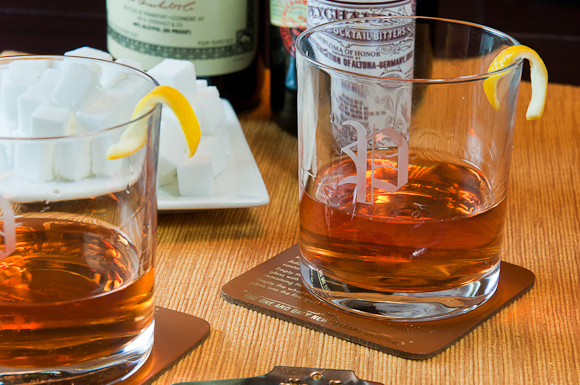 I can appreciate either version of the Sazerac!

Have a great weekend!

The Sazerac - The Original Recipe

Pack an Old-Fashioned glass with ice.

In a second Old-Fashioned glass place a sugar cube and add 3 dashes of Peychaud’s Bitters to it, then crush the sugar cube.

Add the 1 1/2 ounces of Sazerac Rye Whiskey to the Peychaud’s Bitters and sugar.

Empty the ice from the first glass and coat the glass with 1/4 ounce of Herbsaint, then discard the remaining Herbsaint.

Empty the whiskey/bitters/sugar mixture from the second glass into the first glass and garnish with lemon peel. Be sure to strain the mixture.

Bartender’s Notes from Russ: You can use any good 6 – 8 year old Rye Whiskey such as Jim Beam, Old Overholt or Rittenhouse. You can also substitute simple syrup (as they do at the Sazerac Bar and other bars) for the sugar cube.

We participate in the Amazon Services LLC Associates Program, an affiliate advertising program designed to provide a means for us to earn fees by linking to Amazon.com and affiliated sites.
posted on March 4, 2011 in Beverages, Recipes, The South, Travel
12 comments »

END_OF_DOCUMENT_TOKEN_TO_BE_REPLACED

Leave a Reply to The Mom Chef Cancel reply