Pumpkin Muffins with Cream Cheese Frosting made from a Fairytale Pumpkin

If you saw my post on French Pumpkin Soup, you might have noticed that I had a rather ridiculous (hoarder sized) stash of pumpkins that I purchased at the farmers’ market a few weeks ago.  If a girl can’t wear shoes (due to forthcoming ankle surgery next Monday), then she at least needs some pumpkins!

I was rather curious to find out the difference between the pumpkins we purchased.  I wanted to see how they compared in taste and to find the best dishes to use them in.  I bet that many of you might be interested to know what I discover, too. 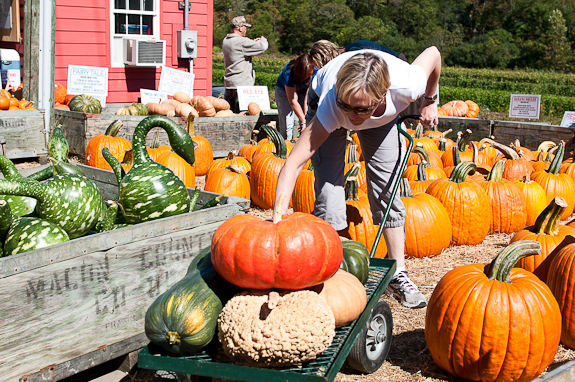 Did you see this pumpkin shopping extravaganza from the soup post?

The first pumpkin that I used in the French Pumpkin Soup, the Galeux D’Eysines’ (the “Peanut Pumpkin”), had a very subtle smell and medium orange flesh. It was perfect for preparing the soup because of its mild pumpkin flavor.  By the way, that soup was incredible.

The latest pumpkin I decided to try (from my stash!) is a Fairytale pumpkin (it looks almost surreal, wouldn’t you agree?).  This pumpkin is quite good for baking but is also ornamental.  It had a real “pumpkiny” smell and the flesh was a deep orange in color. 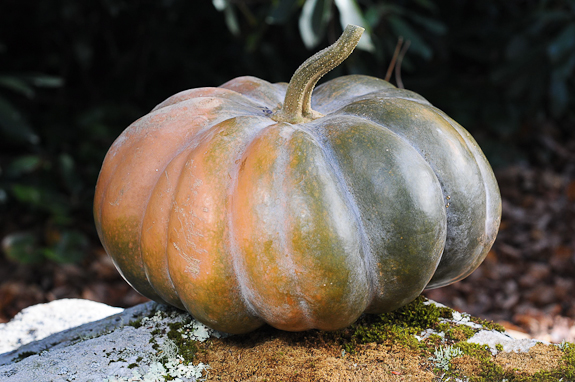 Looks pretty fairytale-like to me! Where's the Prince (or the frog)?!

In fact, I tweeted that it smelled like a “poot” (I really said “fart”, but that probably isn’t very proper to mention on my own site ha!) and I wasn’t kidding! Mr. Bunkycooks even says that I smell like a pumpkin because I have been playing cooking with them for the last few days. Does that mean I smell like a fart poot? 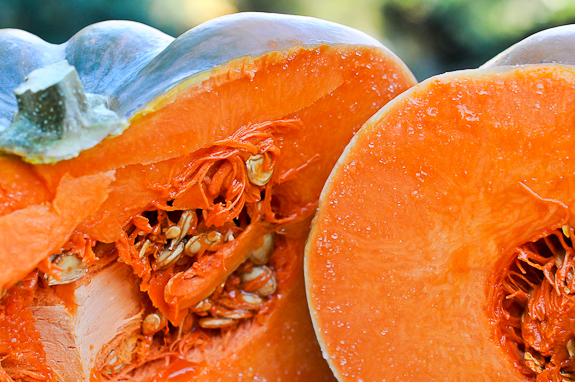 This pumpkin has an incredible amount of moisture and is a deep orange color.

I roasted this pumpkin to try to contain much of the moisture (you can see the beads of sweat in the photo above – wait, that sounds too sexy for pumpkin!). 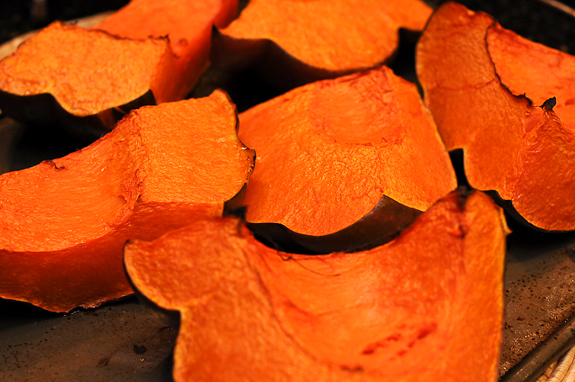 Roasting is your best option for cooking this pumpkin.

It took about ninety minutes to cook and when I pulled the flesh from the outer shell, some of the pumpkin was solid, but much of it had almost a spaghetti squash texture and was very moist. 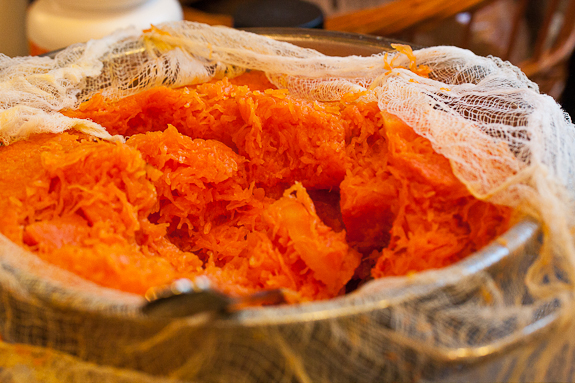 You definitely need to drain this before using the pulp.

I followed this advice and put the cooked pumpkin into cheesecloth, set above a strainer overnight and drained off the excess liquid.  The next day I pureed it and had a very similar texture to canned pumpkin, only much more orange (ain’t no Libby’s on my label!).  I would suggest using a food mill to totally avoid any of the stringy pieces, although the food processor did a nice job. 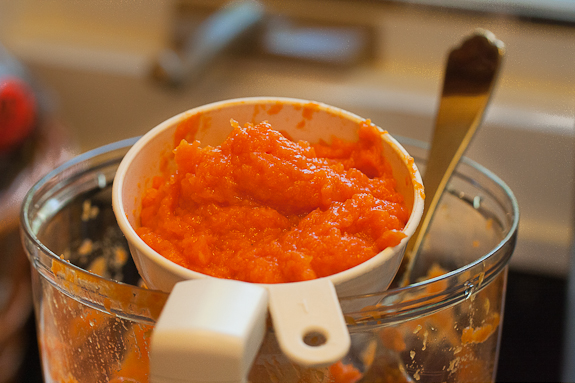 It's not a pretty picture, but you get the idea...

Since I have pounds and pounds of pumpkin to work through (what was I thinking?!), I knew that baking needed to be one of the next attempts after soup.  Oh yeah, just what I need when I will be on my butt for weeks…more baked goods!

Diversion from the baked goods – Here are some roasted pumpkin seeds that I have prepared.  They are healthy snacks…I think.  You need to wash them when you remove them from the pumpkin, let them dry for a few days and then toast them at 250 degrees for about forty-five minutes with a little canola oil and salt (or other seasonings).  They are incredibly different in taste between the two pumpkins.  Just thought you would want to know that for when you too have six pumpkins and a bunch of seeds that you are wondering what to do with! 😆 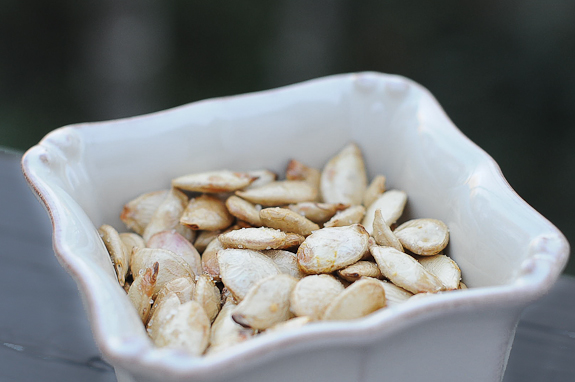 All I know is that I feel like I may turn into one of these pumpkins before it’s all over because there are four pumpkins left a few to go!  Do you think there is a market for resale pumpkins?

So anyway, about the baking…these muffins were so outstanding (I am running out of intelligent adjectives that are permissible by food blogging standards!) that Mr. B would not even let me give some away because we don’t need them! share them with friends and neighbors.

These are great muffins for breakfast and rather than add cream cheese after the fact, I just put my favorite cream cheese frosting right on top, so that one bite has it all!  This way they can be a breakfast or dessert muffin.  I like mine in the afternoon with a cup of tea so that I have enough energy to deal with the next pumpkin I am perky for the rest of the day!

The muffins are dense and flavorful and taste just like fresh pumpkin (and not a poot!).  If you cannot find a Fairytale pumpkin, a Sugar Pie pumpkin would be a nice substitute.  The recipe that I originally found was for Pumpkin Ginger Nut Muffins and this is my adaptation. 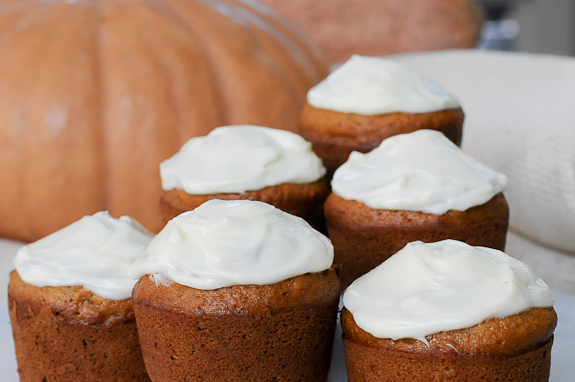 Adapted from a recipe at Simply Recipes
Makes approximately 12 muffins

For muffins:
Preheat oven to 350°F. In a medium sized bowl, sift together the flour, salt, sugar, and baking soda.

Mix the pumpkin, melted butter, eggs, 1/4 cup of water, and spices together, then combine with the dry ingredients, until just incorporated. Do not over-mix. Fold in the chopped nuts and raisins.

Spoon mixture into a prepared muffin tin. Bake for twenty to twenty-five minutes. Check for doneness with a toothpick inserted into the center of a muffin. If it comes out clean, they are done. Remove from the pan and cool on a wire rack.

While muffins are cooling, make frosting.

For frosting:
In a small bowl, blend together cream cheese and butter until smooth. Add vanilla and then confectioner’s sugar until desired spreading consistency.

Spread frosting on muffins, then serve.