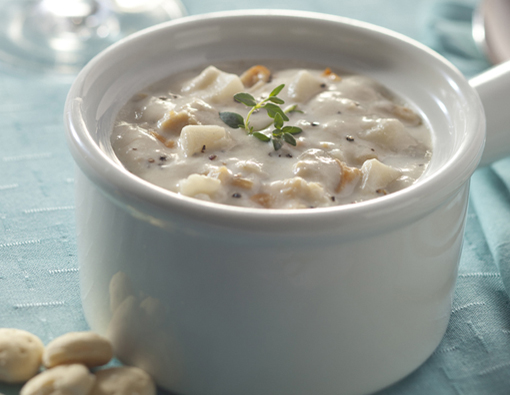 As the weather starts to turn cold here in the South I always think of making soup. I have made several pots already this Fall, but the one soup I dare not mess with is Legal Sea Food’s Clam Chowder.

We were in Boston at the end of October to see some old friends. We both lived there years ago. Boston is definitely one of our favorite cities and we threaten to move back up there every time we visit. It is a beautiful city, especially now that the Big Money Dig is over and I-93 is underground. It is truly amazing how it opened up the city and connected different areas. My only complaint is that it is Brrrrrr…..just so cold for so much of the year! If you can bundle up and don’t mind lots of ice and snow, I highly recommend moving there! Anyway, after checking in to our hotel (the lovely Langham Hotel), we of course headed for the Legal Sea Foods Restaurant on the waterfront.

We have been to many of the Legal’s locations and I have to say that we prefer the location on the waterfront at Rowe’s Wharf. It is always busy (as most of their locations are). It was so busy the Thursday afternoon we were there we had to sit at the bar for a late lunch, which is just fine with us. We like the service at the bar.

My husband had a dozen raw oysters and chowder. His two favorites. I had a small salad and chowder. I had to eat the salad to make me feel better about eating the chowder. It is definitely not on the low cal menu, but it sure is good! Legal’s chowder is pure and simple. Clams, potatoes, onions, clam broth, a few seasonings and cream and more cream. It is nearly rich enough to eat with a fork. That is why it is so good.

Many chowder recipes add too many potatoes, then add bacon (no, not that!) or the cream base is too thin. We try clam chowder whenever we can get it and none can compare to Legal’s. Now I am sure you are thinking that there is a Legal Sea Foods in Atlanta (as well as many other cities), so what’s the big deal with flying to Boston to dine at one? We have been to the one in Atlanta and it just was not as good as the Legal’s up north. Maybe we will give it another try, but the chowder in Boston is better. Hands down. Boston is in New England after all and that is where clam chowder is from.

Costco sells Legal’s chowder. We have tried it. Still, not quite the same as being there. The other option is to have it mail ordered (I have done that in the past for Christmas gifts. They will love you forever!). Be sure to order some rolls. They are really good too. The best option is to have your Delta flight attendant friend pick up a big batch at the airport location for you on her turnaround from Boston to Atlanta.

If none of the above are possibilities and you are in the mood to give Legal’s a run for their money and try the recipe at home, here is a link to the original recipe:

Good luck bringing it home one way or another and enjoy your chowda!

* Photo courtesy of the internet

We participate in the Amazon Services LLC Associates Program, an affiliate advertising program designed to provide a means for us to earn fees by linking to Amazon.com and affiliated sites.
posted on November 29, 2009 in Recipes, Soups and Salads
4 comments »