Bourbon Pecan Pie and a visit to Ellis Bros. in Vienna, Georgia 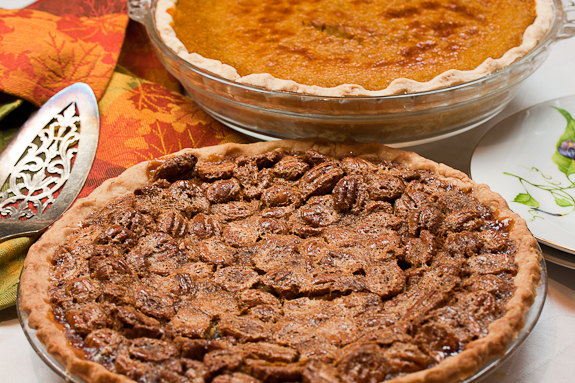 Since it is almost Thanksgiving, that means it is caloric overload pie time at the Bunkycooks!  (And I believe that is probably true in most homes that celebrate the holiday!)

The two traditional pies I have always served at Thanksgiving are pumpkin and of course, pecan pie.  Now, I know I could have gone to the local grocery store and purchased a bag of pecans, but we are the Bunkycooks you know me much better than that and just going to the store to buy pecans would be waay too easy…and I’m sure there’s more learn about pecans On the Road, so off we went to South Georgia! 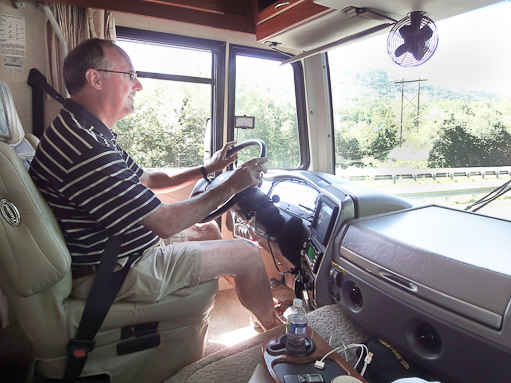 Do we REALLY have to travel in the RV again??

Where better to buy pecans than Ellis Bros in Vienna, Georgia.  Their slogan is “We’re Nuts” and that they are!  Of course, so am I, so what’s the big deal?!

Did you know that there are over 500 varieties of pecans?  I thought a pecan was a pecan, but, of course, it can’t be that easy!  In fact, Mr. Bunkycooks and I tasted every single variety that they had available at Ellis Bros. and I thought I would get sick right on the spot never eat another pecan again!  They not only have raw nuts to taste (in and out of the shells), but they also offer pecans coated in almost every ingredient you could possibly think of (honey, coffee, chocolate, praline, etc. They even have “hot nuts” — I report, you decide).  Ughhhh…. 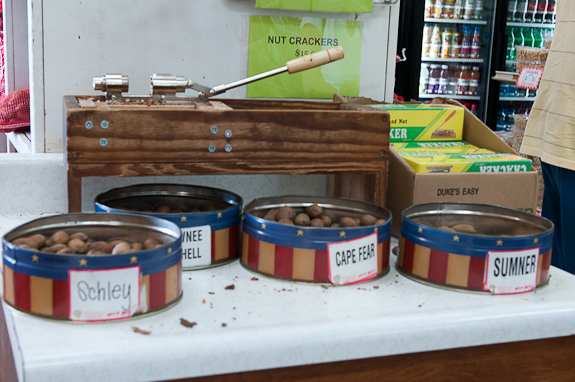 Trying all of these nuts can be a bit overwhelming!

The pecan is the only nut that is truly native to the United States.  While other nuts now thrive here, they were originally imported.  The pecan also ranks second in nut production in the U.S., just behind the peanut. (I think I feel a peanut road trip in our future!) 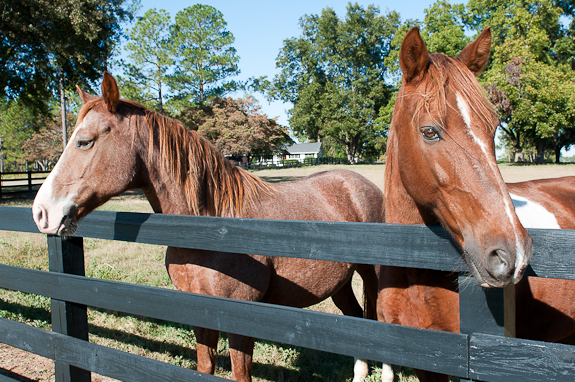 Some local residents at another pecan grove.  Do you think they would like some pecans?

While other states now grow pecans (New Mexico, Kansas, Arizona and California), the Southern states provide the best home with their river bottoms and fertile alluvial soil (states like Texas, Louisiana, Mississippi, Florida, Alabama and of course, Georgia).  Georgia has been the largest producer since the late 1800’s.  Images of the South are replete with pecan trees draped over the driveways and roads. 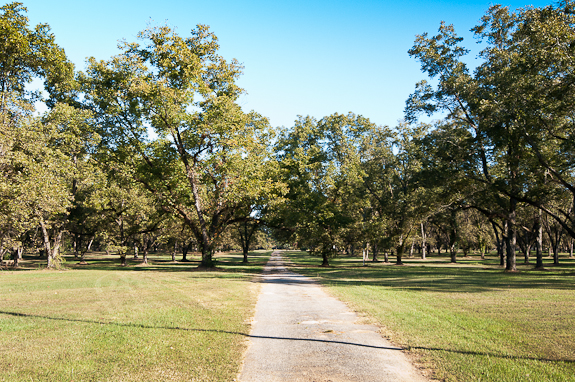 Different nut varieties grow to different sizes.  While I always thought that the large pecans were due to a good growing season, in actuality, it is a different variety of nut.  The larger pecans they had at Ellis Bros. are called “Papershell” and include the Schley and Sumner varieties.  I was very surprised at the difference in taste between the pecans that we tried in looking for some to bring home to nibble on and to use in baking. 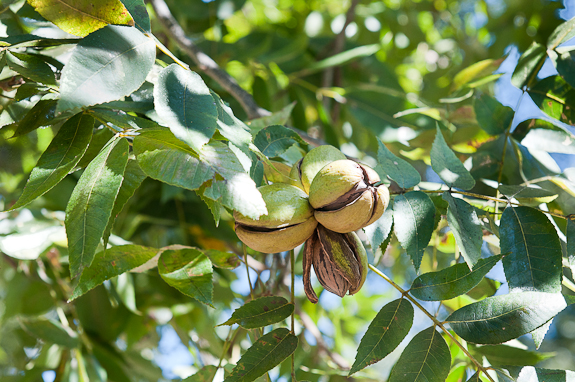 Pecans beginning to ripen on the tree.

Here is what we thought of some of the most popular pecans they sell:

Stuart – This is the most common pecan.  We thought this one was mild with a nice pecan flavor.
Sumner – This was a softer, creamier nut and you could tell it contained more oil.
Schley – Had a more neutral taste and was less oily.
Cape Fear – Had a really strong nutty, pecan flavor.
Pawnee – Was very mild in flavor and drier in taste (less oil).
Elliott – This had the sweetest flavor and the meat was moist and was my personal favorite. 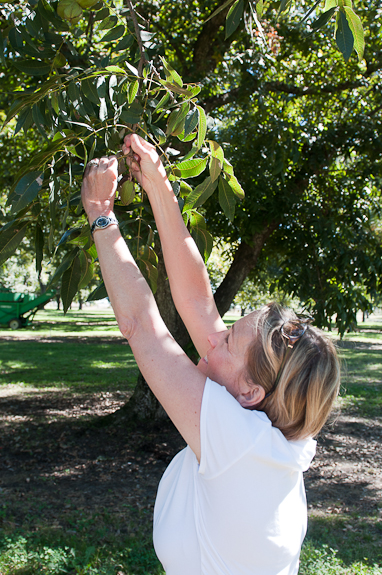 I think I will pick a few!

We tried several others, but the ones we ended up purchasing were the Elliotts to use in baking (since they had a really nice nutty and sweet flavor) and the Cape Fear and Sumner to crack and eat right out of the shell.

Here are a couple of interesting facts about pecans. Native Americans used pecans for medicinal purposes and made pastes and oils from the pecans.  They boiled and fermented the pecans to make a potion called “powcohicoria” which was a popular mood enhancing beverage.  I say we start cranking up the fermentation process and whip up a batch of that stuff! 😆 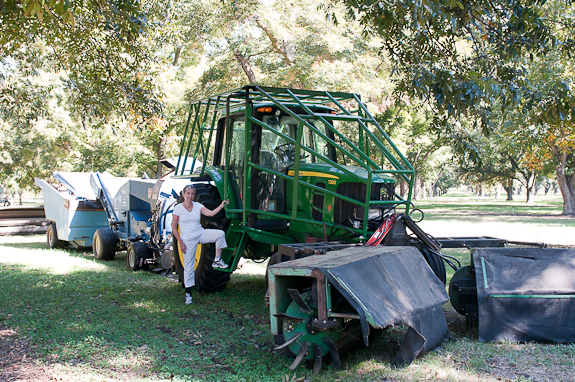 Fire up the tractor so I can gather enough pecans to make “powcohicoria”!

The pecan also has a long list of incredible health benefits such as providing many essential vitamins and minerals.  It has been proven to reduce incidences of degenerative diseases such as Alzheimer’s, Parkinson’s and some types of cancer.  It has also been shown to reduce the “bad” LDL in cholesterol levels and raise the “good” HDL levels. 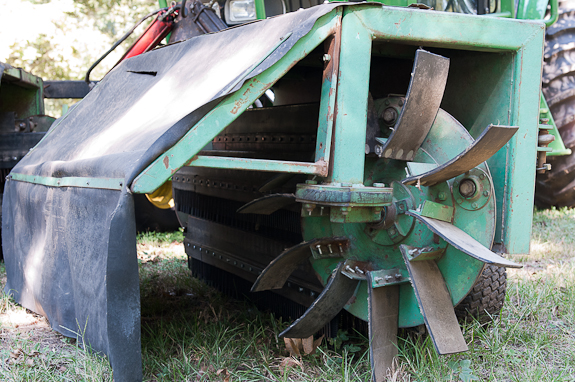 The pecan picker gathers up the pecans that have fallen on the ground (so you don’t have to!).

There are many other advantages to eating pecans that you can read about here.  Mr. Bunkycooks has told me its time to stop talking about the pecan and make some pie so he can start reaping the benefits!  Somehow I think he is less interested in the medicinal qualities as he is in the belly benefits. 😉 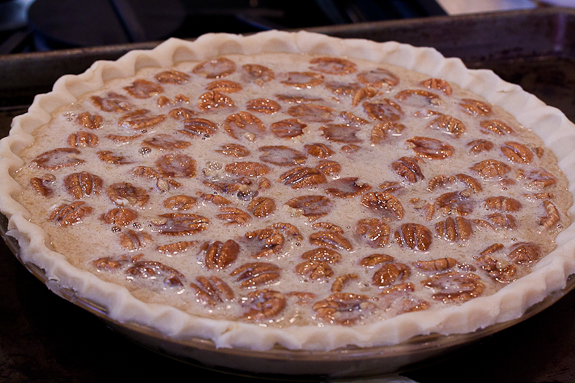 Okay, okay…I am making the pie!

Just so you know, pecans, or any nut, stay at their freshest when stored in the freezer, once they have been shelled.  They are also tastier in baked goods when they have been lightly toasted before using them.

I have a pecan pie recipe that has been my go-to for years, however, I took a chance with this recipe and was glad I did.  (How could I resist with a name like Drunken Pie?) Of course, there probably wasn’t much chance taking from this chef, Hilary White, Executive Chef at The Hil (at Serenbe) in Palmetto, Georgia, but you know how hard it is to break from tradition. 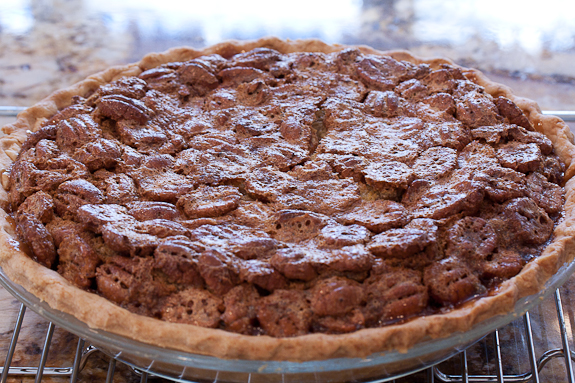 Fresh out of the oven! Pecan pie always puffs up and then collapses as it cools. I want some now!

This pie uses dark corn syrup and a bit of bourbon to liven it up a bit (it also livened us a bit, too), so the filling was darker and richer than my usual recipe (which is made with light corn syrup).

Maybe we can bake up a few of these pies and whip up some “powcohicoria” and have one heck of a Thanksgiving celebration!  Mr. B is voting for that option. 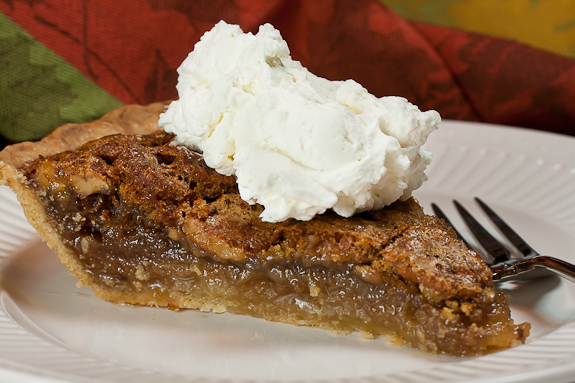 Maybe a slice of this will make Mr. Bunkycooks happy! Now, where’s the “powcohicoria”?

For piecrust:
Place flour and salt in bowl, and cut in lard until mixture resembles small peas. In a Pyrex measuring cup, combine vinegar and egg, and add water to make 1/3 cup liquid. Slowly add liquid to the flour mixture, forming dough. Do not overwork. Remove from bowl, halve and pat into disks. If not using immediately, cover in plastic wrap and chill.

For pie:
Roll out one dough disk and fit in 9-inch pie pan, crimping edges.

Bake in preheated oven for one hour and fifteen minutes (a toothpick inserted in center should come out relatively clean). Remove from oven and place on cooling rack, allowing pie to rest for two to three hours to set.

We participate in the Amazon Services LLC Associates Program, an affiliate advertising program designed to provide a means for us to earn fees by linking to Amazon.com and affiliated sites.
posted on November 18, 2010 in Baked Goods, Desserts, Farms and Artisans, Recipes, Travel
15 comments »

END_OF_DOCUMENT_TOKEN_TO_BE_REPLACED

15 comments on “Bourbon Pecan Pie and a visit to Ellis Bros. in Vienna, Georgia”