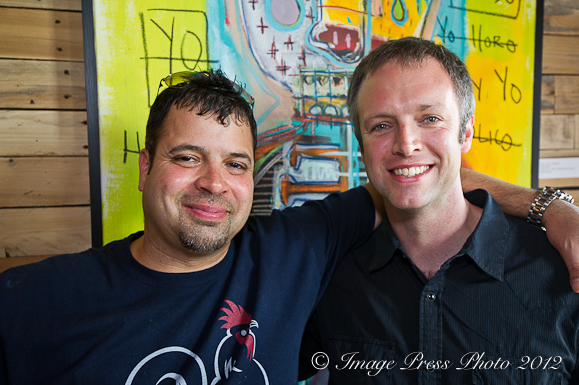 We all try to lead a healthy and happy life, but tonight we are all sinners.  – Chef William Dissen

What is a nice Southern boy with a good Catholic upbringing doing in the basement of The Lift Studios in the River Arts District in Asheville, North Carolina talking about “sexy and lusty” dishes to one hundred guests gathered for what is essentially a charity dinner?  The Blind Pig Supper Club had once again convened on Sunday, July 8, 2012 and Chef Dissen led the invocation with lust, wrath, greed, sloth, pride, envy and gluttony in this exciting “underground” dining experience.  The Seven Deadly Sins were interpreted by two chefs in a seven-course dinner bringing new meaning to Dante’s Inferno. 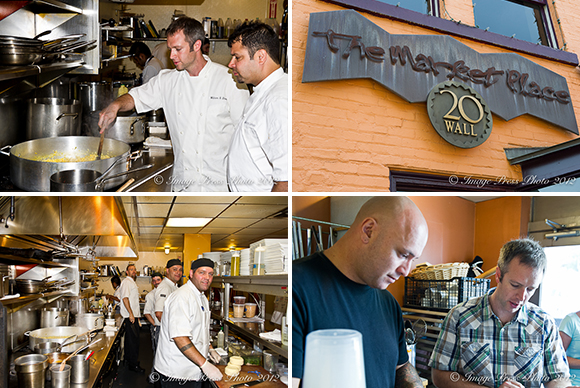 Prepping for the Seven Deadly Sins Dinner at The Market Place

William Dissen, the Chef/Owner of The Market Place in Asheville orchestrated this evening of overindulgence and debauchery.  Surrounded by original artwork by Daniel McClendon depicting the seven deadly sins, the evening’s willing participants were immersed in a night of culinary creativity and the unknown.  Joined by guest Chef Anthony Lamas of Seviche, A Latin Restaurant (Louisville, Kentucky), who brought his Latino flair with heat and spice, this menu was a collaboration of over the top flavors and visual excitement. 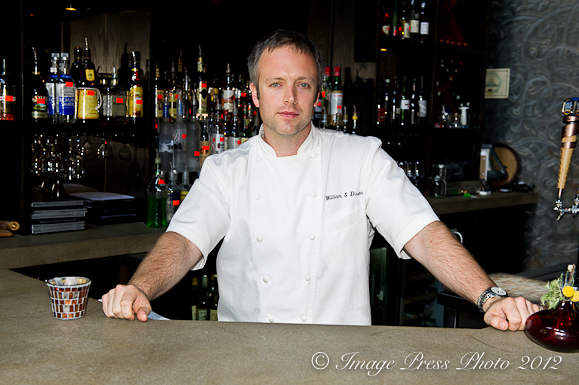 Chef William Dissen at The Market Place in Asheville, NC 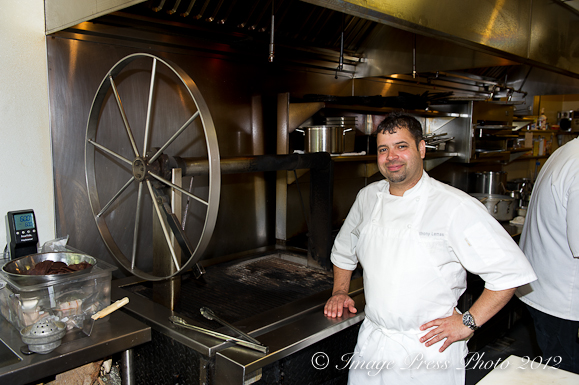 Chef Anthony Lamas at The Market Place in Asheville, NC

Chefs Dissen and Lamas first met at the Monterey Bay Aquarium last year where both are honorees and Seafood Ambassadors for the Aquarium’s Sustainable Seafood Challenge.  When Chef Dissen first discussed the idea for an event with the creator of the Blind Pig Supper Club, Chef Michael Moore, Dissen knew immediately who to invite as the guest chef.  Fire, heat…Anthony Lamas.  The two also share a passion for focusing on the best local ingredients at their respective restaurants and creating dishes that are seasonally focused. 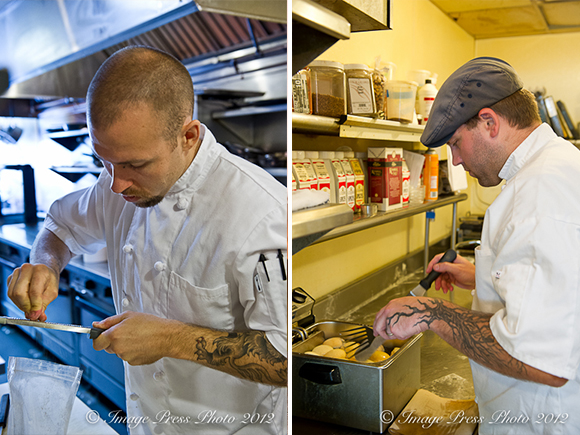 Several days of prep work went into the event 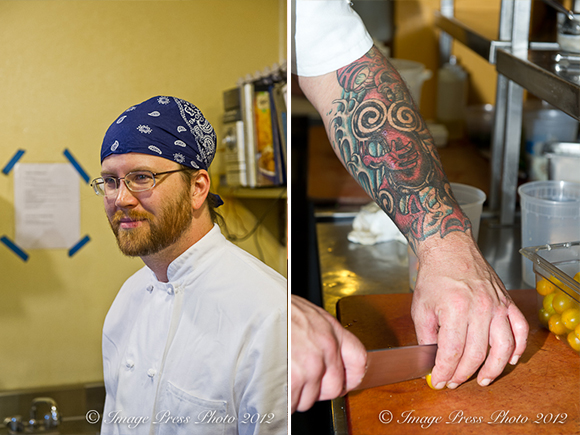 If you are not familiar with the concept of the Blind Pig Supper Club, here’s the overview.  A theme is chosen for the evening and then a chef (and sometimes an additional guest chef, as in this event) is selected to prepare the dinner.  The location of the event is kept secret until shortly before guests arrive.  There is a pop up kitchen in whatever venue is selected and much of the cooking is done prior to the event and brought to the secret location where it is finished and plated.  Proceeds from these events support a number of local charities. 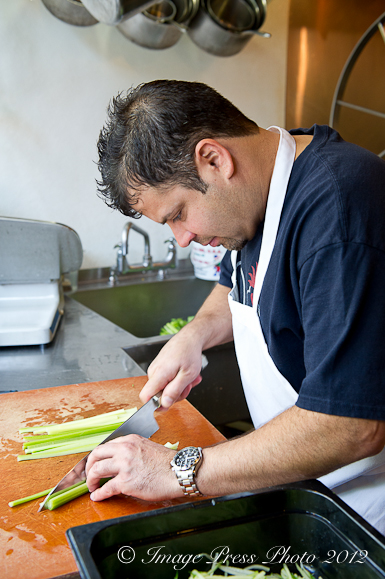 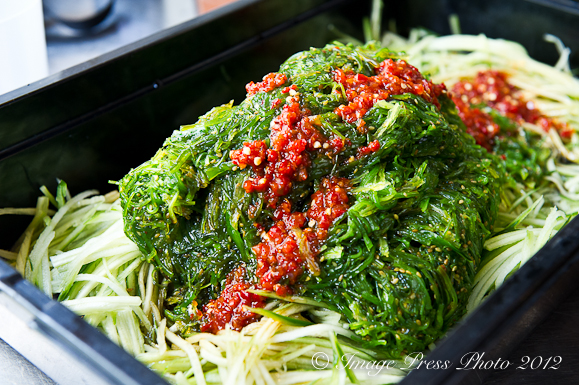 Ingredients for Cucumber and Seaweed Salad for the first course, “Lust”

Started in the spring of 2011 in Asheville and modeled after the “Ghetto Gourmet” concept that became very popular in the San Francisco Bay area in the 1990‘s, these events bring together an eclectic mix of great local chefs, musicians and artists for an event unlike any traditional restaurant experience.

When asked about the inspiration for the evening’s menu, Chef Dissen said that there were so many ways to go with this theme and that part of the inspiration was the forward thinking concept of Ashevillians.  They are adventurous when dining out and that was certainly one of the requirements for attending the Seven Deadly Sins Dinner.  Dishes like “Greed”, the third course, exemplify that with a Local Rabbit Terrine, Lusty Monk Mustard, Summer Truffle Salad, Frisee, Pickled Cherries, Hazelnut and Cognac Reduction. 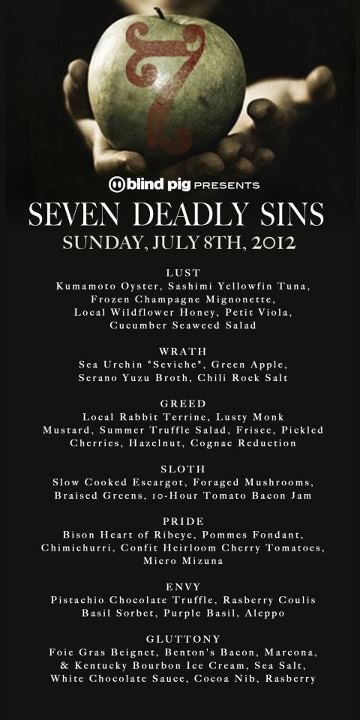 While Dissen grew up in West Virginia and has culinary roots in Appalachia (spending a great deal of time when he was younger with his grandmother in her kitchen), he has also worked with some incredibly talented chefs from one coast to another and points in-between, including Certified Master Chef Peter Timmins at the Greenbrier Resort in West Virginia. 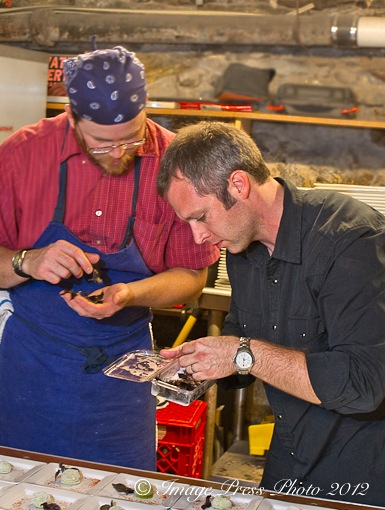 At The Lift Studios in Asheville, NC

Page: 1 2
We participate in the Amazon Services LLC Associates Program, an affiliate advertising program designed to provide a means for us to earn fees by linking to Amazon.com and affiliated sites.
posted on July 25, 2012 in Condiments, Events, Recipes, The South, Travel
10 comments »